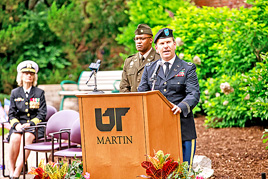 MARTIN, Tenn. – U.S. Rep. David Kustoff (R-TN 8th District) and Col. Michael Banks recalled the freedoms Americans enjoy and the sacrifices that made those freedoms possible during the University of Tennessee at Martin’s 22nd Memorial Day Commemoration. The 9 a.m. ceremony was held on the north plaza between the Boling University Center and the Paul Meek Library at the university’s main campus. The event can be viewed in its entirety at www.facebook.com/utmartin and www.youtube/utmartin.

Kustoff, currently serving his third term in the U.S. House of Representatives, noted Memorial Day’s importance and why Americans should celebrate the day beyond just a holiday weekend. “It (Memorial Day) truly does remind us of our nation’s extraordinary history and all the heroes who gave their lives so that our future could be brighter and could be stronger,” he said. The congressman offered words of comfort to those who mourn loved ones lost in military service to the country and said that the stories of these sacrifices should never be forgotten.

“When we share stories about our brave service members, they do instill a sense of pride among people in Weakley County and in West Tennessee, and in Tennessee and across the nation, and I truly believe that they inspire new generations to protect, to defend and to serve our nation,” he said. “For the men and women who choose to put their lives on the line to defend our country, we must continue to share their stories, to remember what they sacrificed for all of us.”

Although many sacrifices have been made, Kustoff said that freedoms enjoyed today are never guaranteed. “I think we’ve got to take the time to remember that our freedom especially today – especially today – it’s very fragile, and it comes at a high price,” he said. “Democracy, freedom, liberty – they must always be fought for, and our nation will always be indebted to those who give their lives so that we can live freely.”

Banks, of Brownsville, a judge advocate general for the Tennessee Army National Guard, followed Kustoff and talked about his military service that began in 2003 at the age of 30. In 2004, he was deployed for a year in support of Operation Iraqi Freedom and Operation Enduring Freedom in Iraq and Afghanistan. Near the end of his tour in June 2005, he was sent to Bagram Air Base in Afghanistan. He would be there when the famous Operation Red Wings military mission took place, a story told in the famous book and movie by the same name, “Lone Survivor.” The mission resulted in the deaths of three Navy Seals involved in Operation Red Wings and 16 soldiers, sailors and flight crew sent by helicopter to rescue the Seals.

Banks had briefly met a member of the Special Operations Forces at Bagram, didn’t learn his name, and for years Banks did not know if he had been killed in the rescue operation. A chance reconnection in 2018 answered his questions when Banks learned that the Special Forces member was scheduled to be part of a second rescue attempt that had been called back after the first attempt ended in tragedy. “Pretty amazing story in my opinion,” Banks told the audience. “But those are the guys, but those are the men and women that are ready to take the fight to the enemy in order for us to sit here today and enjoy the freedoms that we enjoy.”

Banks concluded by again expressing gratitude to those who have served.  “I once heard someone say that if you were born an American, you hit the jackpot of life. Think about that for a moment – the standard of living that we enjoy, the freedoms that we enjoy, unalienable rights that we enjoy are all because we were born on this patch of soil. Nothing else that we did other than being born right here.

“But think about how fortunate that we are because we were born American. But here’s the thing – is that I’m thankful for each and every man and woman who has helped preserve that jackpot of life that we’ve been born into.”

Maj. Ahmad Matthews, of the Skyhawk ROTC Battalion, was the event’s master of ceremonies. ROTC members presented the colors; the national anthem was sung by UT Martin student Kimberly Gordon, of Brooksville, Mississippi; the invocation and benediction were offered by Chaplin Debra McGuire, U.S. Navy (ret.), of Henry County; and a 21-gun salute was presented jointly by the UT Martin Department of Public Safety and the Martin Police Department. Taps were played to conclude the event by UT Martin students James McGregor, of Martin, and Brayden Campbell, of Huntingdon.