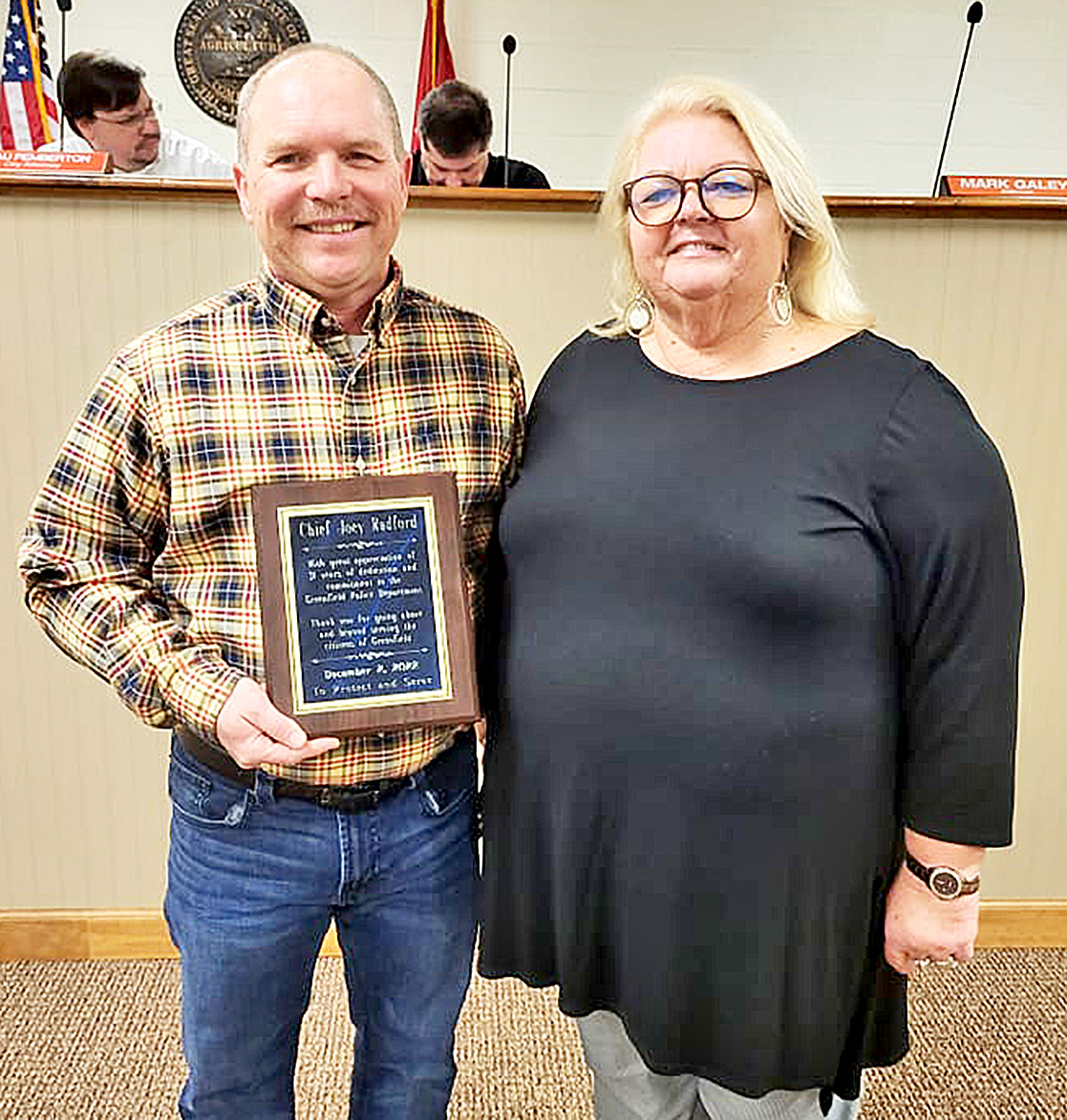 During the January Board meeting, Mayor Cindy McAdams presented retired Police Chief Joey Radford with a plaque for his 31 years of service to the Greenfield Police Department and the citizens of Greenfield.

“Chief Radford decided to retire on Dec. 2,” Mayor McAdams said. “Tonight, we want to give him recognition for all he’s done for Greenfield during the past 31 years.”

The Mayor then presented Radford with a plaque that reads: “In great appreciation of 31 years of dedication and commitment to the Greenfield Police Department. Thank you for going above and beyond serving the citizens of Greenfield to protect and to serve.”

Radford said, “I’d just like to thank all of the people who supported me all these years. I certainly appreciate it. I’ve enjoyed working and serving in this community in which I live.

“I pray that we will be able to continue contributing to the city. My wife and I just opened up a new business. It’s successful and we’re doing well. I’m closing one chapter in my life and opening another.

“I appreciate the opportunity to lead my department. I’ve had some good people to work with all my life. Assistant Chief Danny Smith and City Court Clerk Tabbi Essary have been with me the whole time.” Radford also expressed his appreciation to the other officers. He concluded his remarks by saying, “I appreciate everybody that’s helped me.”

The audience showed their support and appreciation for Radford’s years of service by responding with a resounding applause.

As the meeting got underway, Mayor McAdams recognized recently appointed City Recorder Jerica Spikes, who filled the position vacated by Callie Croom Smithson, after she accepted a position at UTM.

According to Crise, the City of Greenfield was awarded a 90/10 grant that provides 90 percent of the cost to purchase the property, which amounts to $248,400, and requires a local match of 10 percent from the city totaling $27,600.

Greenfield Industrial Board Chairman Mike Biggs spoke next, and commended property owner Larry Pentecost for being “extremely civic minded during the process.” The only stipulation in selling the land was that Pentecost be allowed to keep his cattle on the property, until the city finds an industrial prospect that offers to develop something on the site.

“The state told us that this is a good piece of property,” Biggs said. “It joins with what the city now owns.” He noted, after Greenfield was turned down for a 70/30 grant through TVA, Crise suggested Greenfield apply for a state grant, which is better than a TVA grant, because it is a 90/10 grant.

“You don’t know how lucky you are to have Justin Crise in this county,” Biggs said. “He had done a super good job.”

After hearing from Crise and Biggs, the board voted to amend the city’s budget to allocate $27,600 in local matching funds for the land purchase. Mayor McAdams stated the city has the funds available to cover its share of the purchase in CDs.

The board also amended the budget to show the additional revenue provided by the grant totaling $248,400.

Board members commended Crise and Biggs for all of the hard work they invested in obtaining the grant.

“This is great for Greenfield,” Mayor McAdams said.

A major topic for discussion was increasing the Community Room fee and deposits. The user fee is currently $75 plus a $25 deposit.

Spikes stated people must sign a contract, and if they fail to return the keys by the next business day or violate any other portion of the contract, they lose their $25 deposit.

For these reasons, the mayor suggested increasing the fees.

This was followed by a motion from Alderman Jaye ​Massey to leave the fee set at $75, but raise the deposit to $75, which was approved.

Bethany Elam, Professor in the Accounting department at University of Tennessee at Martin, requested permission to rent the city’s Old City Hall Conference Room, located at 222 North Front St., on a yearly basis and pay once per month. She plans on using the facility after college classroom hours during weekdays and on certain Saturdays and Sundays, for her accounting business.

Elam stated her busiest time of year is January through April, which is the income tax preparation season.

The board agreed to rent the community room to Elam for $200 per month, which gives her priority use of the facility. Elam agreed to coordinate with the city recorder monthly regarding her planned hours of operation. The details are to be worked out in a lease agreement.

However, when Elam is not using the facility, the city may rent the room out to others.

Gibson said, “In the first six months, Marilyn has brought a lot of new activities to the Senior Center. As a result of that, we’ve had a lot of new people come and visit us regularly. So we have the momentum now to make things a lot better than they have been. She has reinstated the monthly potluck lunch, and we invite all of you to come.”

Gibson said that Pugh works about seven hours getting ready for the potluck luncheon, and puts in extra time when the center hosts a chili supper fundraiser.

“Marilyn gets paid for four hours per day, five days a week, for a total of 20 hours,” Gibson said. He stated Pugh works a lot of extra hours and never gets paid for it, but doesn’t complain. “Some days she has to leave an hour early. Consequently, I would like to ask that her pay does not get docked for that,” Gibson said. He suggested that the board make the Senior Citizens Center director’s job a salaried position. “I think it’s a slap in the face for her to lose an hour’s pay, with all the hours she puts in.”

No action was taken during the meeting, but the board took the remarks under advisement.

In department reports, Fire Chief Bob Dudley stated the city was turned down for an AFG grant once again this year. However, the Tennessee Forestry Service awarded his department with a $3,000 grant for firefighting tools including rakes and other equipment.

Dudley stated the fire truck the city ordered probably won’t be ready for delivery until sometime in 2024.

The annual Greenfield Fire Department report given by the fire chief shows there was $181,000 in damages, 71 calls of service, and 4,834 man-hours that includes firefighting, training and extra work.

Public Works Director Robert Rodriguez reported traffic cones are set up on McKenzie Hwy 124 because of five storm drains that were run over by heavy trucks and farming equipment and crushed. Some of the holes are five feet wide and four feet deep. At Rodreguez’s request, the board approved purchasing five steel culverts from the lowest bidder.

Assistant Police Chief Danny Smith stated he is applying for a $69,000 grant through the Violent Crime Intervention Fund established by Gov. Bill Lee in Oct. 2022. He noted this is a 100 percent grant that requires no local matching funds.

“If we get this grant, I’d like to purchase new records system management software,” Smith said. “The one we currently have is 26 years old. The company that created it has gone to a different platform. They can’t service it any longer and it has become obsolete.”

Smith stated there was enough money in the grant to purchase violent crime fighting tools, such as license plate recognition cameras that he would like to have installed at key locations within the city. “That will help us monitor violent offenders that we don’t have the capability to do now.”

Smith stated another need is for unit mounted police radios. He noted county law enforcement is getting new digital radios and Greenfield law enforcement officers won’t be able to communicate with them. “With the new digital radios, we’ll be able to communicate with Weakley County, Martin, Gibson County and Bradford officers, which we can’t currently.”

Mayor McAdams stated the next regular monthly City Board meeting is at 5:30 p.m., Tues., Feb. 14.

With no further business to discuss, the meeting adjourned.