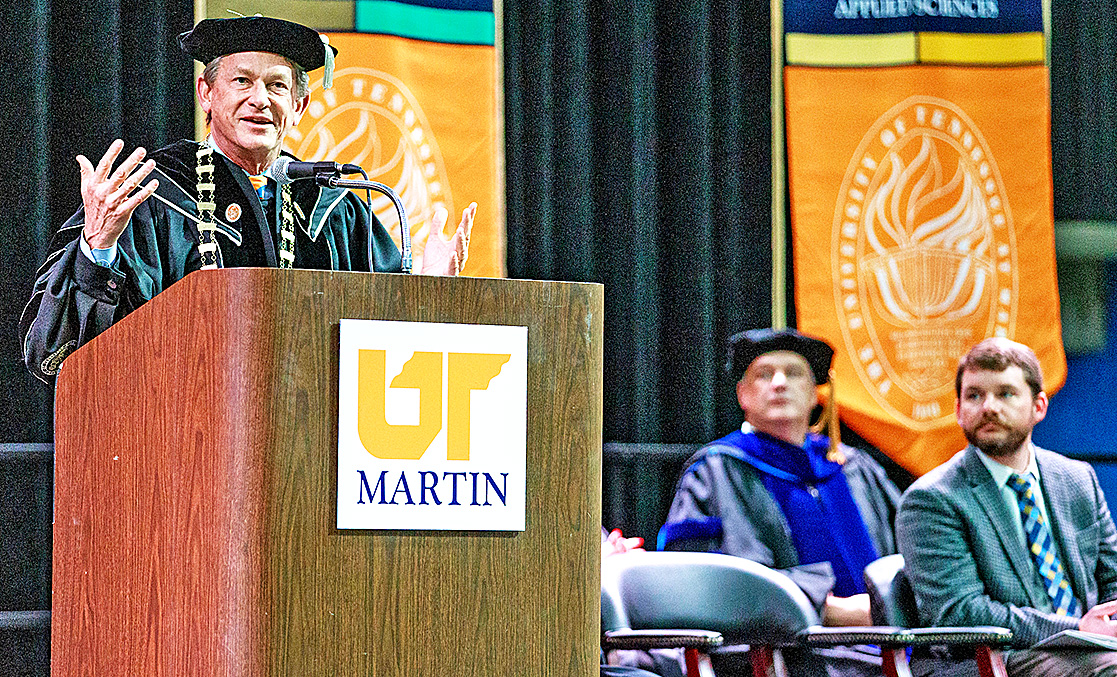 Randy Boyd has traveled widely and seen many things, so he used three stories from his personal experiences to advise graduates during his commencement address Dec. 10 in the Kathleen and Tom Elam Center. The University of Tennessee System president spoke to 391 graduating seniors in person while others watched the ceremonies live online via Facebook and YouTube.

Boyd’s comments to graduates during both the 10 a.m. and 2 p.m. ceremonies focused on three personal stories that each offered a moral, the first of which reminded graduates that “success begins with yes.” He told of being a first-generation college student who graduated from UT Knoxville at age 19 and then went to work for his father’s business. After four years, he went out on his own and started his first business that failed in six months. His second business was selling electric fencing supplies to stores in Georgia, Alabama and Florida from a van that had neither air conditioning nor a radio.

He told the audience that not having an air conditioner saved gas money. “But I didn’t have a radio on purpose,” he said. “I wanted to make sure that I was always focused on my customers, and what they were sharing with me and what they told me. And if you listen long enough to your customers, they’ll tell you what you need to hear.”

Six years later, he said that his customers started asking for a product used by animal owners called The Invisible Fence. He saw the potential in the product, learned that the product’s patent was about to expire, and Boyd eventually invested all his resources to have his version of the product designed, which is now the cornerstone of a multimillion-dollar, world-wide business.

“The point to the story is success begins with ‘yes,’” he said. “I’ve met a lot of people that have been successful in non-profits, in government, in business. I have yet to ever meet somebody that said, ‘You know, I just kept saying ‘no’ until something great happened.’ It never happens.” He said “yes” to an opportunity that changed his life, and he urged graduates to be prepared to do the same.

The moral of his second story urged graduates to “believe in serendipity.” Boyd told of once being a mountain climber with the goal of climbing the highest mountain on each continent, so he traveled to Mendoza Province in Argentina to climb Aconcagua, the highest mountain in South America. After eight days of a 10-day climb, conditions became so dangerous that he and his group abandoned the climb. He was stranded in Mendoza for an additional two days and decided to visit some of the many vineyards located around the area. He quickly came to love the people, the area and the wine produced from the vineyards.

Boyd returned the next year with his wife, Jenny, and they eventually purchased a small vineyard that they have now owned for 15 years. The journey to climb a desolate mountain turned into a business opportunity that might not have happened otherwise.

The moral of his final story was “always dream big.” Boyd told of a 2015 trip to Israel when he was serving as Tennessee commissioner of economic and community development. He traveled with then Gov. Bill Haslam and other Tennessee business leaders with the goal to build economic relationships, and the weeklong trip ended with Haslam and Boyd having a private meeting with former prime minister and Israeli president Shimon Peres. The legendary world leader and Nobel Peace Prize recipient was 92 years old at the time, and to their surprise, the Tennessee visitors encountered an active, fully engaged man.

Peres shared other advice, but Boyd said he was so caught up in the experience that he failed to take notes. However, he did recall a bit of wisdom that Peres shared as he was closing: “You’re old when you can count more accomplishments of the past than you can dreams of the future, and you’re forever young when you can count more dreams of the future than you can accomplishments of the past,” Peres said. “Always dream big.”

Carver opened each ceremony with a moment of silence remembering victims of the tornadoes that struck the region Dec. 10, 2021. Other speakers included Dawson Gremmels, Student Government Association president from Huntingdon, and Dr. Danny Donldson, UT Martin Alumni Council president from Martin. Dr. Roberto Mancusi presented special music and led the alma mater at the conclusion of both ceremonies accompanied on the piano by Dr. Elaine Harriss. Both are professors of music.

The ceremonies can be viewed at www.facebook.com/utmartin and will also be archived on the university’s official YouTube channel.