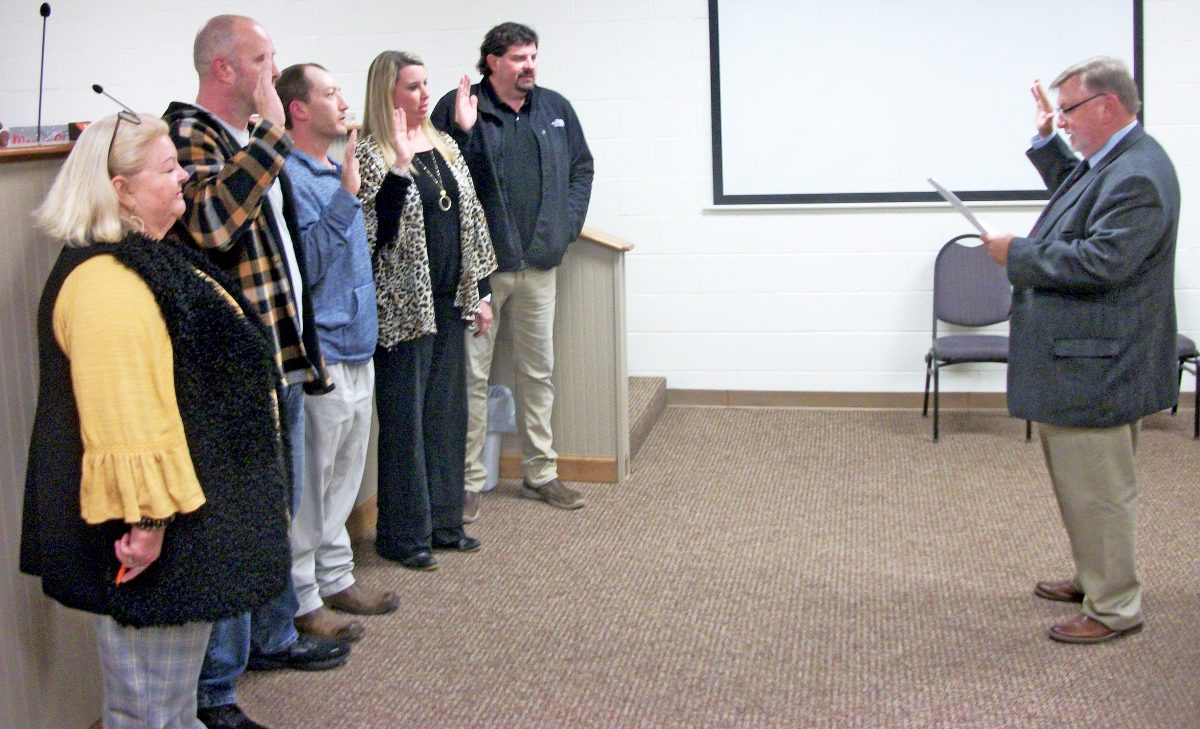 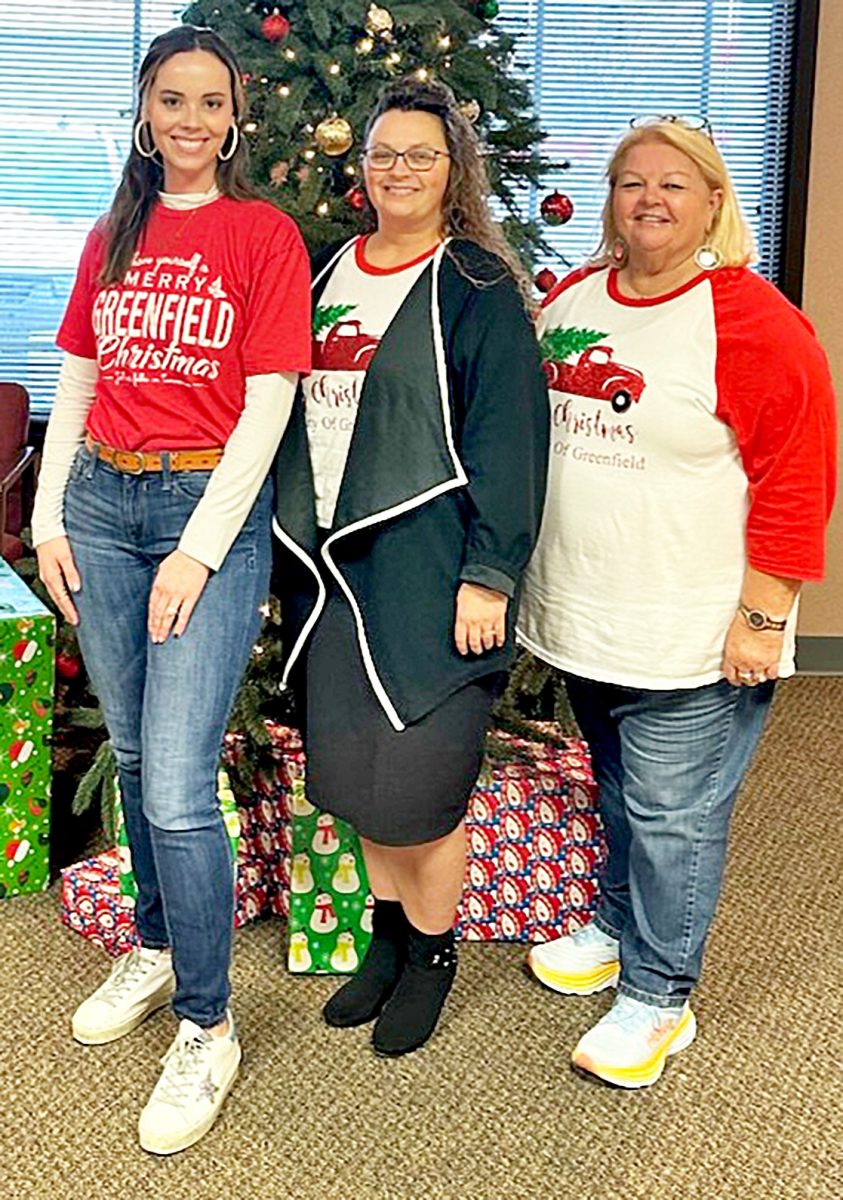 Greenfield City officials that were elected or re-elected in the Nov. 8 municipal elections were sworn-in minutes before the Greenfield Board meeting on Tuesday, Dec. 13.

The Board appointed Alderman Massey as vice mayor, because he received more votes than any of the other aldermen candidates seeking office.

Greenfield’s eight aldermen are elected to four-year terms in office. The aldermen positions are staggered, with four members being elected every two years. This ensures that at least half of the Board members are experienced in the operation of city government.

The mayor only votes to break a tie when aldermen are evenly divided.

In other Board action, City Clerk Jerica Spikes was appointed Greenfield City Recorder to fill the position left vacant by Callie Croom Smithson, who resigned in order accept a job as business manager over the Department of Agriculture, Geosciences and Natural Resources at UT Martin.

Callie says she plans to spend the two weeks between jobs with her husband, Ty Smithson, her one-year-old daughter, Landry, and family.

The Board praised Smithson for her outstanding performance during the four years she served as City Recorder.

“I appreciate the City for putting your trust in me the past four-and-a-half years,” Callie said. “Leaving is bitter-sweet. I know it’s in good hands with Jerrica. I’ve come up with crazy ideas for community events and things. It’s been great working with everyone.”

Mayor McAdams stated Spikes, who has 15 years of experience as a city clerk, has completed all of the certification requirements for the job of City Recorder and is well positioned to do the job. “She knows the ins-and-outs and Callie has been a great trainer.”

“Jerica will do a great job,” Callie said. “The City will have an honest, smart and trustworthy person.”

The Board was reminded that Greenfield Police Chief Joey Radford retired Dec. 2 and someone needs to be hired to fill the position. Alderman James Roy Pope made a motion to hire Assistant Police Chief Danny Smith as interim chief, providing MTAS has no problem with it. However, Alderwoman Kelly Keylon suggested the Board wait to hear from MTAS before making the appointment, and Pope’s motion failed for lack of a second.

Keylon moved to not discuss hiring an interim police chief until hearing from MTAS. The motion was approved by a unanimous vote.

On Alderman Pope’s recommendation, the Board approved giving Assistant Police Chief Danny Smith a 50 cents per hour pay raise, retroactive to the date he assumed the role of assistant chief. This resulted in applause from the audience, indicating their support for the pay raise.

The Board heard an audit report from Chloe Humphrey of the auditing firm of Cowart, Reese and Sergeant, concerning the audit of the City of Greenfield’s financial records for the year ending June 30, 2021.

According to Humphrey, the audit indicates there are no current year findings against the City.

“We had another great year,” Humphrey said. “I’m really sad to see Callie go. She’s been great to work with. But I’m excited to be working with Jerrica. I think she’s going to be a great fit for the position.”

According to Humphrey, there is $309,000 in American Rescue Plan Act funding, which will show up in the budget as revenue once it is budgeted, to be spent.

Additionally, Humphrey noted the City has paid off all outstanding debt, which she said is an outstanding accomplishment.

In department reports, Fire Chief Bob Dudley stated that during the month of November, Greenfield Fire Department responded to nine calls for service. He said that due to the dry weather conditions, the firefighters were dispatched to extinguish three rural fires. “I’ll have a full, annual report next month,” Dudley said.

Parks and Recreation Director Chris Fulcher reported approximately 58 youngsters participated in the football program, which ended in November. Fulcher announced he would drop off signup sheets at Greenfield School for Pee Wee Basketball. The signup deadline is Jan. 6. He also noted the restrooms at the park have been remodeled. Additionally, Fulcher reported the tools for preparing the ballfields have been delivered, and if funds are available, he plans to build a shed for storing the equipment. Fulcher mentioned replacing the wooden sign at Callin’s Field and restoring the batting cage to working order. He stated he is also looking into replacing the park sign with a larger sign.

Keylon suggested asking local citizens to donate used equipment, such as gloves and other items so children who don’t have certain items they need to play sports could play. It was suggested the equipment could be dropped off at City Hall. Pope stated adults could also offer to sponsor some of the youngsters by paying their fees.

“I’d like to congratulate the Boys and Girls Jr. High Teams for winning the conference championship last night,” Mayor McAdams said. It was noted the last time both teams won the championship was in 1986.

Senior Citizens Center Director Marilyn Pugh said, “Our attendance is up every month.” She reported a group of seniors attended a show at a playhouse and ate at the Cracker Barrel Restaurant. She also stated there is a potluck meal at the Center every month and watercolor classes are available to the seniors. After looking into purchasing a van for the center, the mayor stated nothing has turned up yet. She said no used vans are available and new vans are too expensive. The only other options, said the mayor, are renting a van, which costs $350 per day, or traveling by private vehicle.