THE LAST HUDDLE – Dresden head football coach Keith Hodges (standing at center) speaks to his team during their last postgame huddle of the 2022 season. Photo by Melissa Overton. 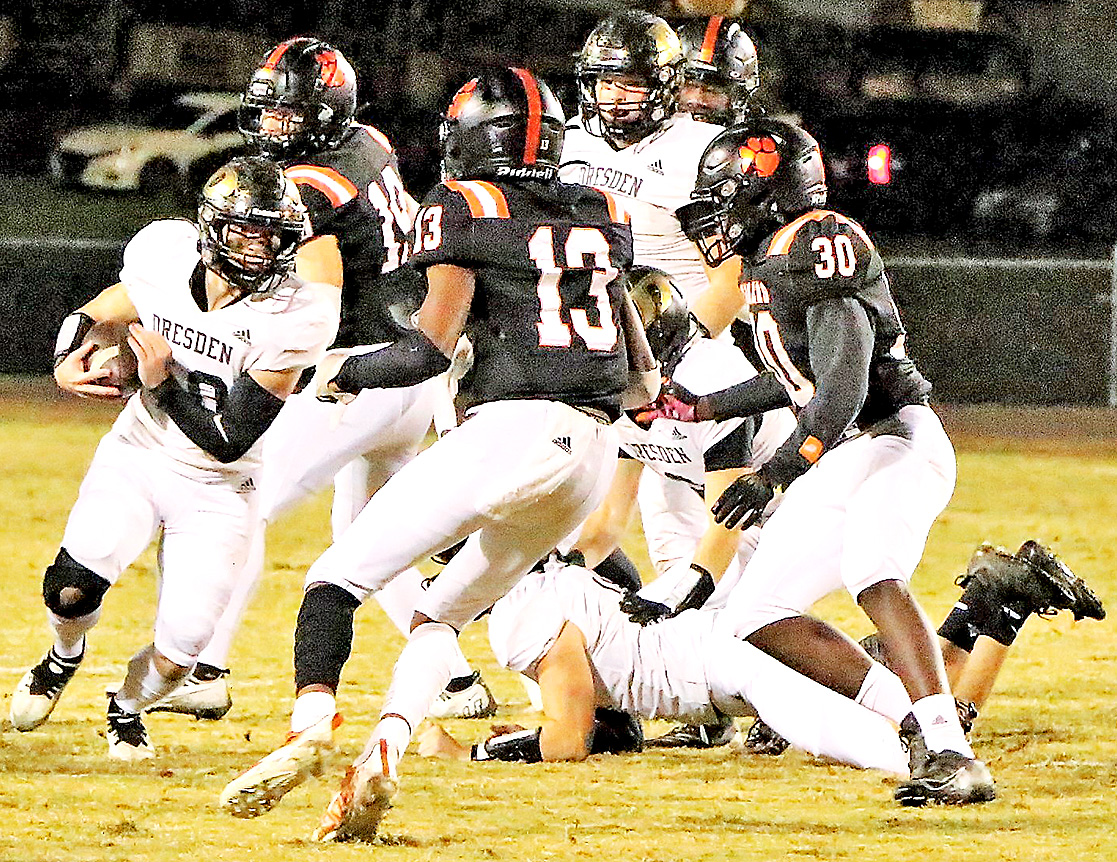 Two fourth-quarter touchdowns were not enough to save the day for the Dresden High School Lions Friday night in Fayetteville as they fell 42-17 to the still-undefeated Tigers in the second round of the state Class A playoffs.

“We played good football the other night,” said Dresden head coach Keith Hodges. “The fight we showed was obvious, but our defense was just on the field too much. I have to give credit to Fayetteville’s defense, as they were able to put us in long third down situations. I thought our defense played great until the frustration kicked in from being on the field too long. Our effort was outstanding, and we caused Fayetteville to make more mistakes than us. But in the end, their athleticism was hard to stop on that many possessions.”

The Lions made the first mark on the scoreboard in the first quarter as Mark Maddox capped off Dresden’s opening possession with a 36-yard field goal.

The Tigers added another six points early in the fourth before Dresden’s offense finally broke through with a 25-yard scoring pass play from quarterback Tatum Oliver to Raymond Johnson, setting the score at 28-10.

But Fayetteville replied with another TD to hike their lead to 36-10.

About halfway through the fourth, Dresden’s Nick Turnbow returned a kickoff 75 yards for the touchdown, and with Maddox’s extra point, the Lions closed some of the gap, 36-17. But Fayetteville had the final word with a parting TD, setting the final tally at 42-17.

Dresden’s Reese Bell intercepted a Fayetteville pass in the second quarter, and the Lions’ defense created two turnovers with fumble recoveries during the game.

“We just were not able to capitalize on those like we needed to,” said Hodge.

The Lions finish the 2022 season with a 9-3 overall record and a 5-1 showing in regional competition.

“I’m very proud of this group and the season they had,” said Hodges. “We had many players step up and fill in roles down the stretch. That was needed, and that says a lot about their work ethic and how we have kids that are great teammates.”

The coach gave special praise to his senior players.

“Many of our seniors are four-year players and deserve a ton of credit for the success we’ve had,” he said. “They were a great group to not only coach, but to be around every single day. Just like every year, each team is special and those that will graduate will be missed.”

Hodge said he plans to give his boys a couple of weeks off and then start laying the groundwork for next season.

“We’ll be in the weight room after Thanksgiving break,” said the coach. “Gaining good weight and strength will be a big key for us, but also developing leadership, accountability, and depth in the off-season program. We’ll be returning 11 starters total, which is a great start after losing so many seniors. We have a phenomenal group returning, so I’m looking forward to seeing these guys develop for next year.”