SHERIFF WILSON HONORED – Retired Weakley County Sheriff Mike Wilson is pictured with fellow officers outside the WCSD, during a retirement reception held in his honor on August 30. Photo by Jasmine Williams. 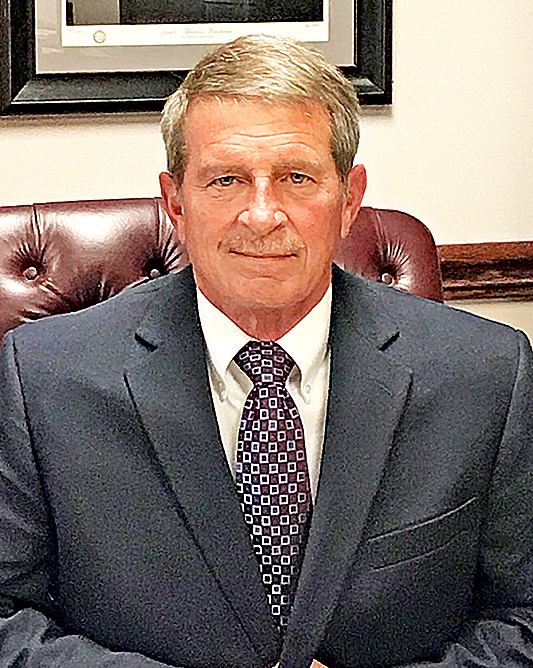 THE END OF AN ERA

Retired Weakley County Sheriff Mike Wilson, who has the distinction of being Tennessee’s longest serving sheriff, was honored during a retirement reception held to congratulate him and wish him the best in the future.

He expressed relief knowing he was leaving the department in great hands.

According to Wilson, his long tenure in office is not due to anything he has done, but to the people he has surrounded himself with.

Now that he is retired, Wilson says he’s looking forward to spending more time with his family. He also plans on hunting, fishing and pursuing other interests.

Wilson says he plans to take a little time to reflect on his law enforcement career and attempt to adjust to his new routine as a retiree.

“After coming down here every day, and then not doing that anymore, it’s going to be quite a change for me,” he said. “I have a lot of activities that I want to do at home, and try to get several things in order. But, I’m not just going to sit home and do nothing. I don’t know what I’m going to be involved in. I’m going to wait and see what opportunities present themselves and go from there.”

In closing remarks, he told the audience at the retirement reception, “I love each and every one of you.”

A Life of Law Enforcement

Mike is a lifelong resident of Weakley County. He is one of eight children born to John T. and Ruth Wilson.

He graduated from Dresden High School, where he was a standout football player for the Dresden Lions.

Wilson has worked in law enforcement his entire adult life. At the age of 21, he was hired as a Dresden Police officer. Next, he worked for a few months as a Gleason Police Department patrolman.

“When I first ran for sheriff, I would never in my wildest dreams have thought that I would have held the office for this long,” Wilson said. “I worked for it, and I was blessed with it. I could never thank the citizens of Weakley County enough for the opportunity they have given me.”

Wilson can be described in many ways; soft-spoken but always heard; easygoing but firm; and laidback but constantly moving. It’s a unique personality that suits him well in his role. Those who have known him best over the years describe him as trustworthy, fair-minded, reliable, and a man of integrity.

“Being sheriff is not about glory. It’s about helping folks and doing the right thing,” Wilson said. He states it’s important for a sheriff to be honest, to be of good character, and to have a lot of patience.

To his credit, Wilson’s sound fiscal management has resulted in a budget that comes in under expenditures each year.

Wilson states he has only had to dodge gunfire once in his career that he can recall. This occurred in his early years working for the WCSD.

“I’ve been in some scary circumstances, but I never had to take the life of anybody,” said Wilson. “However, I’ve had some officers that have been hurt.”

One example is Stacey Bostick, who was shot in the arm by an armed suspect while serving a warrant.

Humble as ever, Sheriff Wilson stated he owes any success he’s had during his time in office to the highly competent and conscientious members of his team.

“I want to give all the credit to those on the front lines,” Wilson said. “They’re the go-to people. I’ve been in their shoes, and sometimes you don’t know how close you came to (being injured in the line of duty).”

Wilson described WCSD deputies as well trained, certified and capable of meeting the needs of those they serve.

“Every officer with this department is certified and receives training each year in excess of what is required,” he said. “But even more important, these officers have chosen to stay here instead of leaving to go to other departments, which provides a wealth of experience that can’t be taught. The key to it is having good people that work for you that you can trust. They’re the ones that take care of you.”

Wilson said a few of these key people he has worked with over the years include: “Chief Deputy Mark Black, who has been a tremendous benefit to this department; Tracy Greer with jail administration; Frances Dowden, everybody’s go-to person; Marty Plunk, one of the best investigators I’ve ever seen; as well as Jim Phelps, Steve Todd and Kim Higgs, who have retired, were all a valuable part of what goes on down here.”

“Also, other local police departments have been very good to work with,” Wilson said. “If it wasn’t for this opportunity these fine people have given me throughout the years, there are so many people that I would not have known and befriended in Weakley County and across the state.”

Additionally, Wilson states he has had a great working relationship with the Weakley County Commission. When commissioners were considering building the new jail, he visited them personally and explained why it was needed.

“I couldn’t ask for a better group of people to work with, and they’ve been very good to me. I appreciate every one of them,” he said. “I have some wonderful memories. I wouldn’t take anything for the experiences I’ve had working this job.”

Changes at the WCSD

Sheriff Wilson says he has witnessed many changes, during his tenure in office.

“When I first started, there were just a handful of officers working at the WCSD. We’d come in during the morning and worked until we got through,” Wilson said. “We now have three clerical, 27 law enforcement personnel including SROs, and 25 corrections officers.”

In 1999, the WCSD moved from its cramped quarters at the old Sheriff’s Office on Poplar Street to the newly constructed building on Hwy 22.

“Other than the roof, which is being replaced after 22 years, the rest of the building is in excellent shape, and just as clean as when we first came here.” he said.

Wilson also said: “The population has grown during the past 40 years. Also, the TCA Code was rewritten three or four times.”

Many historic changes have taken place since Wilson assumed office.

This includes the WCSD becoming a member of the 24th Judicial Task Force, which partners with other law enforcement agencies in solving crimes and making major drug busts.

One of the more innovative practices aimed at helping drug users to get free of their addictions is the 27th Judicial District Drug Court Program serving Weakley and Obion counties, which Sheriff Wilson has been a part of since its inception in November of 2002. This post-plea treatment program targets non-violent offenders suffering from severe substance abuse issues. Clients accepted into the program receive intensive treatment, intensive supervision, frequent drug screens, and continued judicial intervention.

Another major change Wilson promoted, and has been an integral part of, is the School Resource Program, which placed an officer in each of the county’s schools.

When school safety began taking over national headlines, Wilson worked with local departments, communities, and the school system to create a plan to provide school resource officers in all Weakley County schools.

The sheriff said cooperation has always been, and will continue to be, a priority between all agencies, whether they are local, state or federal, private or public.

Most school resource officers are Weakley County Sheriff’s deputies and are paid out of the Sheriff’s budget. The only exceptions are SROs employed by the Martin Police Department, which administers its own SRO program. Wilson explained that Martin SROs receive a portion of their pay through the WCSD equal to the pay Sheriff’s deputies serving as SROs receive. Martin Police Department pays its SROs additional money to bring their salaries up to the same level as other MPD officers. This is due to MPD officers being paid more than sheriff’s deputies. In fact, Martin initiated its own SRO program, before the WCSD received funding to implement SROs for the rest of the schools across the county.

Wilson also stressed the importance of utilizing inmate labor, which has been very helpful to those cities and non-profit organizations that have utilized them.

“They’re good workers, if they have someone to supervise them,” Wilson said. “When COVID hit, the program had to be suspended to prevent the inmates from getting the virus and bringing it back to the jail. Since that time, some of inmates have been allowed to return to working outside the jail, but the program is not as active as it was.”

“We made incarceration meaningful,” Sheriff Wilson said. “This is a no-frills jail, but at the same time, those serving time are offered meaningful programs when available. Inmates are also encouraged to work. Inmates are available to government and non-profit organizations, and have been for many years.

Wilson states that new work programs have been initiated by the governor’s office that allow inmates to work at local businesses, which will provide them with jobs after they serve their sentences and return to their communities. The money the inmates earn goes toward paying for child support, fines, court costs, and offsetting the cost of incarceration.

“When they get paid, we keep that money here and use it to pay these costs,” Wilson said. “However, any balance belongs to the inmates. So, when they get out of here, they’ll have a job if they want it, and a little bit of money. These funds can be used to support themselves and their families.”

“We also utilize approximately one-dozen inmates here, working in the kitchen and for cleaning, under supervision,” Wilson said. “This includes washing the clothes, cooking the food, cleaning the cells, and other duties.”

It’s important to note that the inmate labor program operates at no cost to the county.

“We must continually seek new sources of revenue to offset the burden of the taxpayers,” he said. “We are using every means at our disposal to require inmates to pay for their incarceration. This includes revenue from jail fees, officer costs and housing state prisoners, etc.”

Concerning the problem of illegal drugs, the sheriff says the WCSD continues to wage a war on illegal drugs and drug dealers.

“There isn’t anyone or any department that has worked as hard as your sheriff’s department in the fight against drugs,” Wilson said. “Our record speaks for itself.”

As Weakley County Sheriff, Wilson has served as past president of the Tennessee Sheriff’s Association and chairman of the organization’s finance committee. He was also selected vice-chairman of the Statewide Automated Victim Information Notification (SAVIN) committee and legislative board.

Under Gov. Phil Bredesen, Wilson was appointed to the Peace Officers Standard and Training Commission (POST) and was elected chairman of the commission for a one-year term.

Additionally, during his tenure in office, Wilson has served on the Weakley County 911 Board, Weststate Corrections, West Tennessee Meth Task Force and many others.

In recognition of his hard work and expert leadership, Wilson was elected Sheriff of the Year by his peers.

The Wilsons reside in rural Weakley County and are the proud parents of James and Michael Wilson.

James and his wife, Rachael, live in the area, while Michael, who is single, resides in Texas.