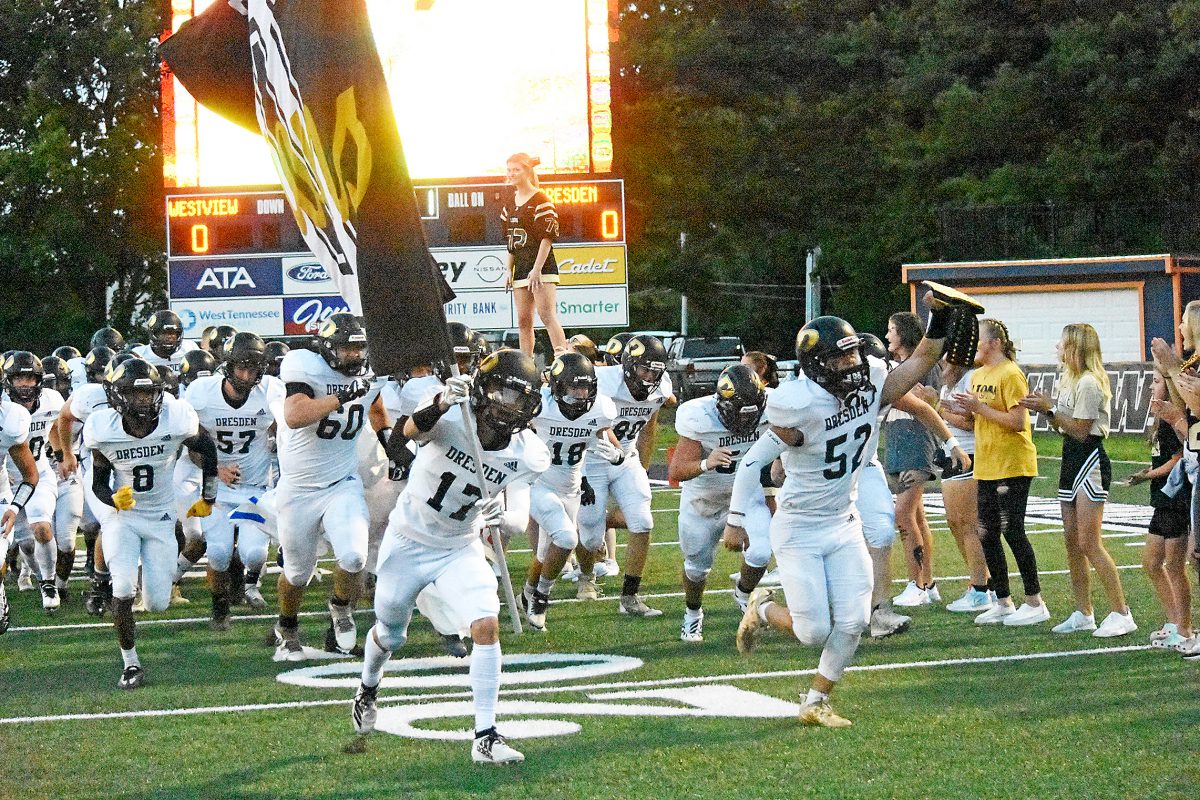 ON THE WAY TO VICTORY – The Dresden High School Lions hit the field fired up and ready to rumble on their way to a 28-13 season-opening victory over the Westview High School Chargers Saturday night at UTM.  Photo by Ron Park. 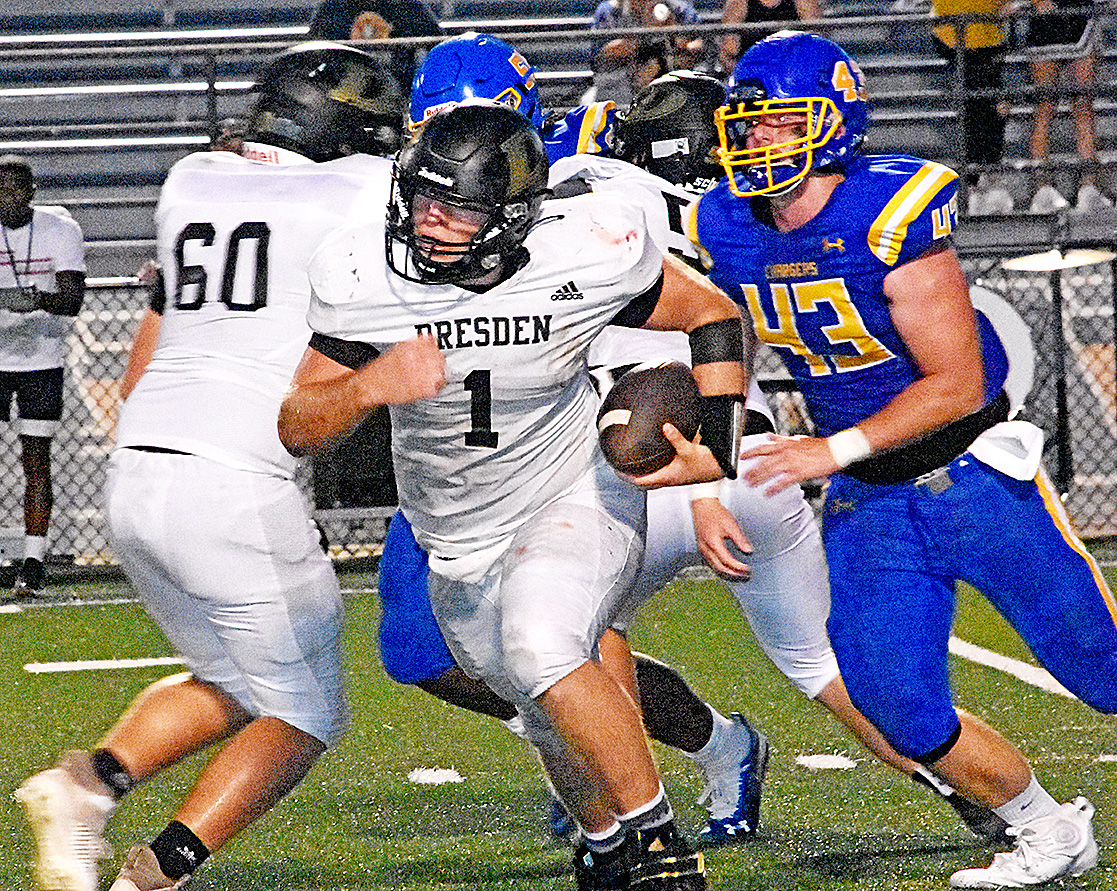 Dresden quarterback Tatum Oliver picks up some yardage on a keeper during the Lions’ season-opening win over the Westview Chargers Saturday night at UTM. Photo by Ron Park 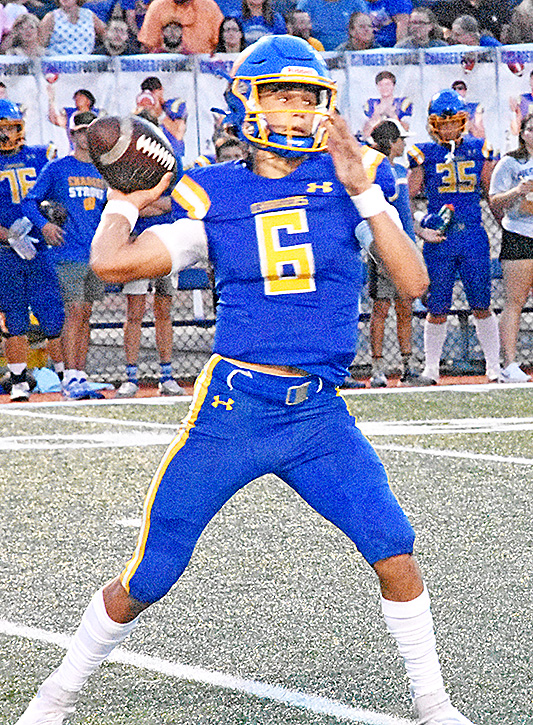 If a team wanted to make a big first impression to start off the season, one good way to do it would be to defeat a defending state championship team on the opening game.

And that’s exactly what the Dresden High School Lions did Saturday night at UTM as they topped the 2021 2A state champ Westview High School Chargers 28-13 in a high energy contest with lots of exciting twists and turns along the way.

The first quarter, however, was all D as the defensive crews for both teams did a good job stifling any offensive momentum, resulting in a number of punts and turnovers on downs and leaving the score at zip to zip going into the second stanza.

Dresden’s Raymond Johnson put the first foot in the endzone when he took a punt return all the way home early in the second – but that one was called back on a penalty.

It was Westview’s Micah Daniels who made the first mark on the scoreboard two minutes into the second quarter, running in for six after picking up a Dresden fumble on a fake punt play. Brian Navarrete booted the extra point, and the Chargers were up 7-0.

Following a turnover on downs for Dresden, the Chargers were back in the endzone when Drew Shanklin caught a long bomber from quarterback Craig Ross – but a penalty kept that one off the board too.

Dresden’s Tristan Jett set the stage for the Lions’ first score when he intercepted a Westview pass. Three plays later, Dresden quarterback Tatum Oliver connected with Johnson for a 43-yard scoring pass play. Mark Maddox added the extra point, and the score was locked at 7-7 with three minutes left in the first half.

And that tally held to the half – due largely to Jett, who intercepted another Westview pass, this time an intended touchdown toss into the endzone right before the buzzer.

The Lions claimed their first lead of the game one minute into the third quarter when Jett collected a pass from Oliver and sprinted 69 yards to paydirt. Maddox’s kick was good, and Dresden was up 14-7.

Two and a half minutes and one Westview punt later, Oliver mailed one to Nick Turnbow for a 37-yard touchdown. Maddox put it between the posts again to give Dresden a 21-7 advantage.

The rest of the third quarter did not produce any further changes on the scoreboard, but on the third play of the fourth, Westview’s Quincy Hamilton broke away from around midfield and trucked it all the way for the TD. The following kick was no good, but the Chargers had closed some of the distance 21-13.

After a couple more turnovers for both teams, Dresden put the final dent in the scoreboard with just under four minutes remaining when Turnbow returned a Westview punt for six and Maddox made it four in a row for a 15-point winning margin.

Dresden’s Creed Melton stopped Westview’s final drive with a pass interception, and after gaining a few yards on the first down, the Lions took a knee to kill what was left of the clock.

According to Dresden head coach Keith Hodge, keeping the players’ emotions in check was an important part of the equation.

“We still definitely had some moments where we let it get out of hand, being the first game and all,” said Hodge. “But regarding the areas we were most concerned about going into game one, I thought we performed well in those.”

Hodge praised both the special teams and the defense for good performances, though he added that they do need to work on their running game.

“Our special teams played very well and had very few pre-snap penalties,” said Hodge. “Defensively we flew around and played really well. Tons of energy and we got hats to the ball all night. Turnovers are always big in every game, and we were able to create several. Field position might have been the biggest key in the game. We were able to flip the field several times but also start drives in good positions. Overall, the team played very well together, and we put ourselves in good position to start the season off 1-0.”

Westview head coach Jarod Neal was not pleased with his team’s performance.

“We did not play well,” said Neal. “We missed a bunch of opportunities in all phases of the game. Give Dresden credit; it is their job to take those opportunities away, and they did. We have to do better moving forward.”

The Lions will be trekking over to the west side of the county to take on the Greenfield Jackets Friday night, and Westview will be hosting Peabody on Friday at UTM. Both games start at 7 p.m.

Hodge said they will need to watch out for Greenfield’s flexible offense and bring their A-game on offense.

“We’ll have to play disciplined defense and force them into tough situations,” said Hodge. “Offensively, we have to keep drives alive and get the ball into the redzone better.”

Neal said he expects a serious challenge from the Golden Tide, who handed the Chargers their only loss last year.

“We have another tall task ahead in Peabody,” said Neal. “We need a great week of practice, and we need to play very well.”