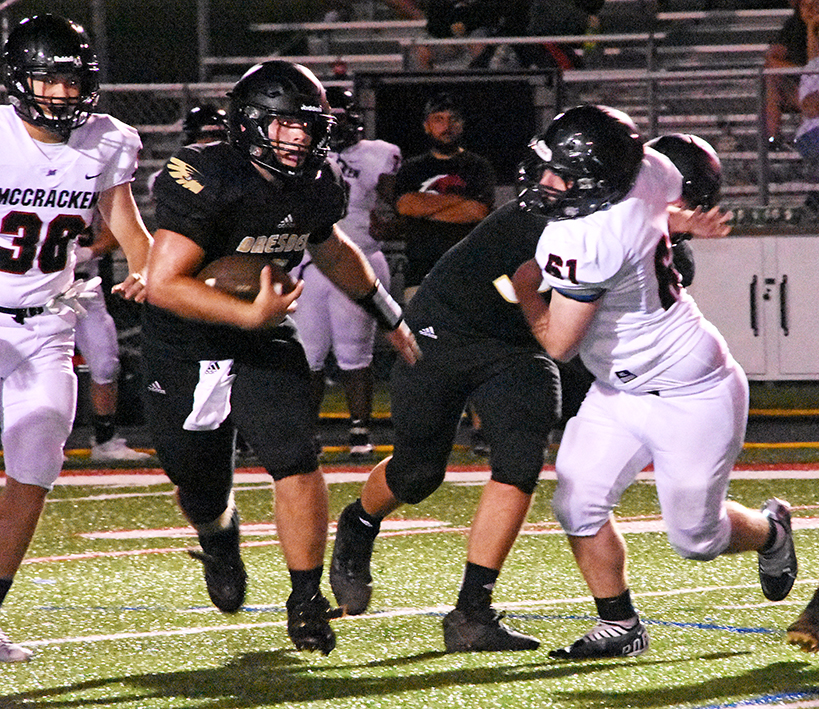 The Dresden Lions were looking pretty good Friday night as they shut down the McCracken County Mustangs from Kentucky 21-0 in two 10-minute quarters of jamboree action at Henry County High School.

Closing out the night’s series of games, the Lions scored once in the first quarter and then scored twice more in the second. All three touchdowns were made by Quarterback Tatum Oliver.

According to Dresden Head Coach Keith Hodge, the preseason contest was a good opportunity for the team to get a feel for the Friday night routine.

“Overall, we played well,” said Hodge. “The flow of the game was important so we could evaluate how we handle things. Both sides of the ball improved from the previous week and that’s something you always want to see.  Defense flew to the ball well and the offense put together good drives every possession. We were able to get some other guys in the game which was good for them and the team.”

The Lions made their first move after forcing the Mustangs to punt away their opening possession. Dresden’s first drive almost stalled around midfield, but a big first-down sprint by Tristan Jett saved the day and put the Lions on the Mustang five. Oliver stepped it over the goal line on the very next play.

Oliver was back in the end zone less than a minute into the second quarter after a pass to DeAngelo Lambert put Dresden on the Mustangs’ one-yard line.

With 5:42 left on the scoreboard, Oliver, with the assistance of some great blocking by the O-line, delivered a big 43-yard keeper carry for six.