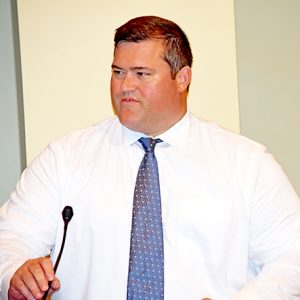 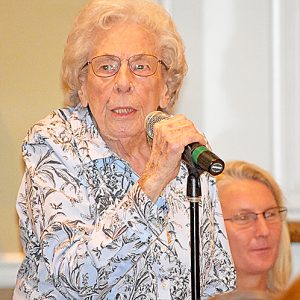 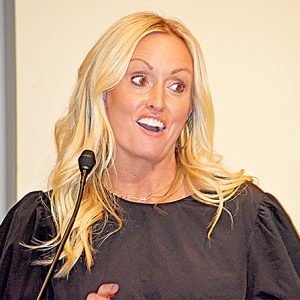 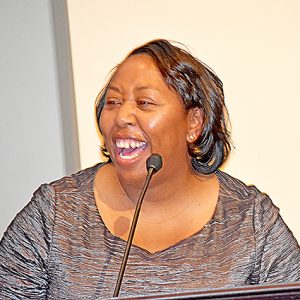 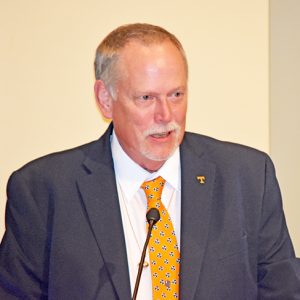 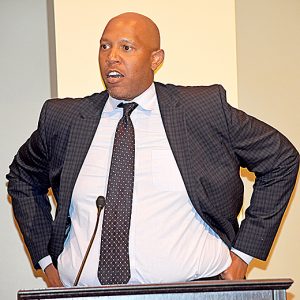 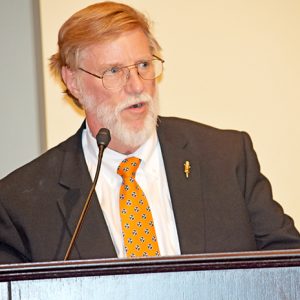 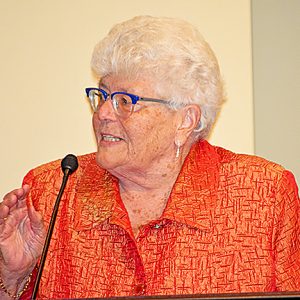 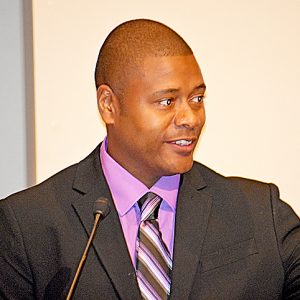 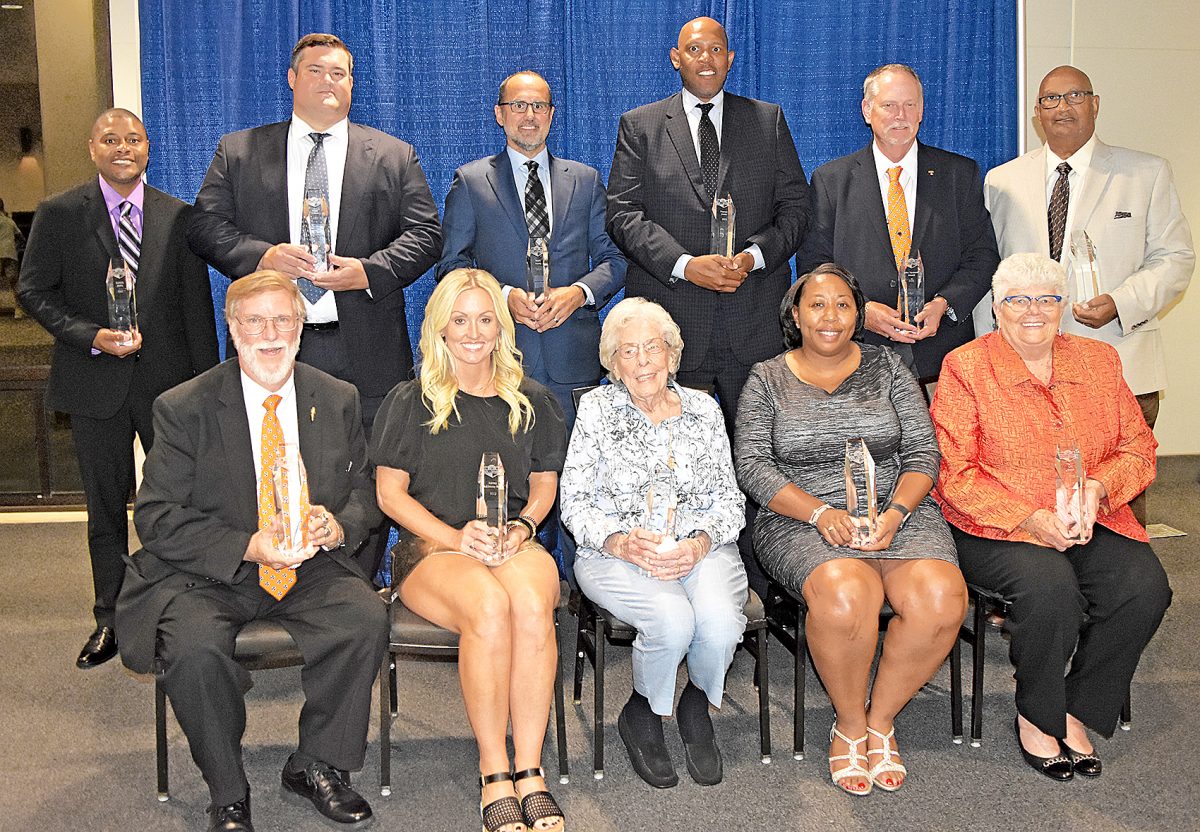 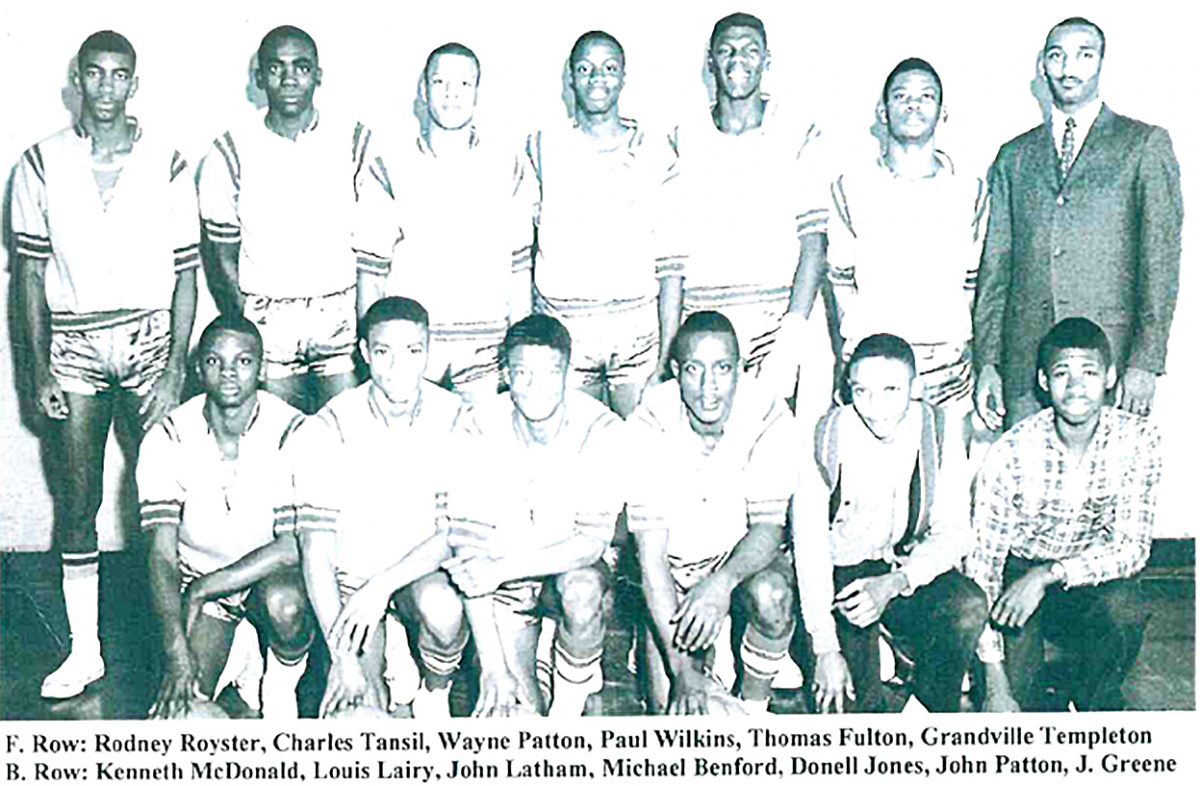 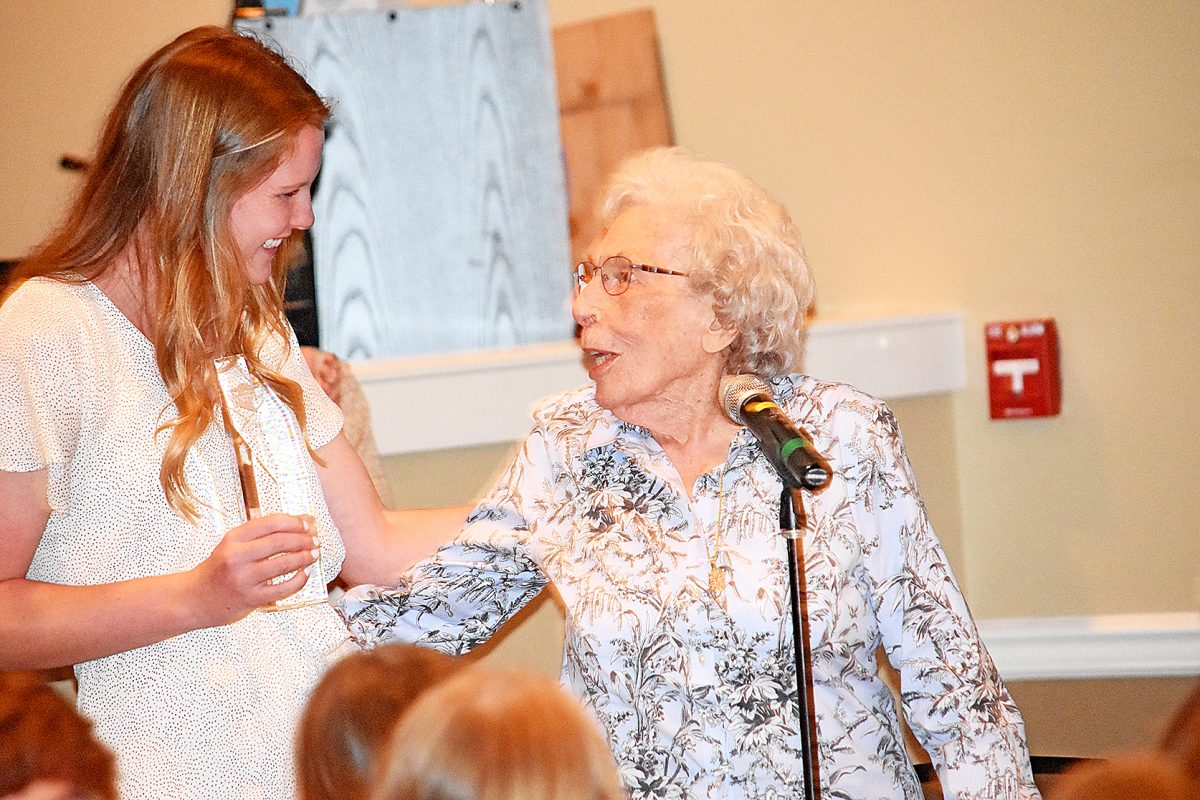 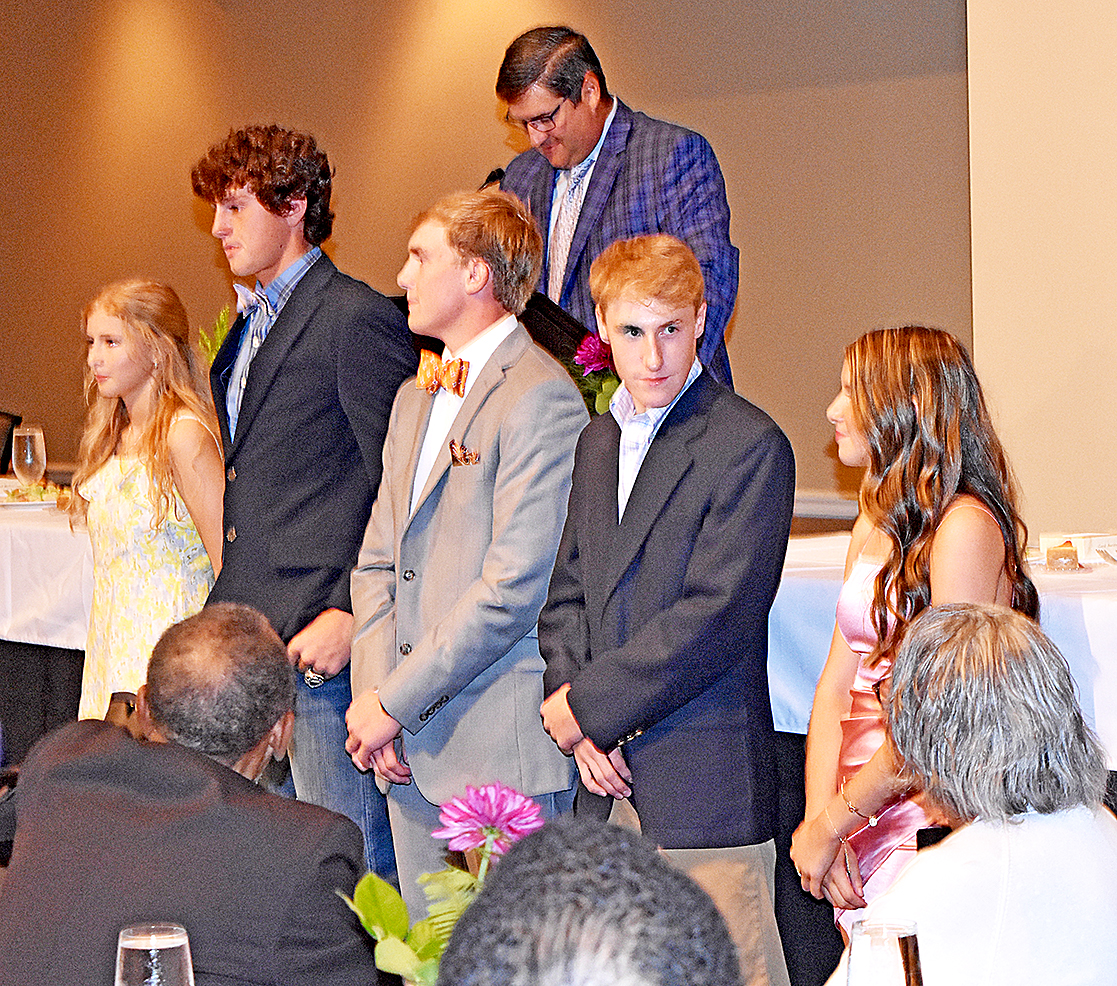 SCHOLARSHIP RECIPIENTS – Student athletes receiving $1,000 scholarships were (from left) Brooklyn Young and Garner Anderson from Westview, Will Harris from Greenfield, and Trey Eddings and Parker Ferrell of Dresden. Unable to make to the banquet were Edie Darby from Greenfield and Kolton Crochet and Carrington Lifsey from Gleason.

Ten local sports legends and one legendary team were inducted into the Weakley County Sports Hall of Fame during its inaugural banquet and induction ceremony Saturday night in the ballroom at UT Martin’s University Center.

*Lin Dunn, a standout basketball player from Dresden, who went on to become one of the premier coaches in the nation, heading up women’s basketball programs with Purdue and the WNBA’s Seattle Storm and the Indiana Fever (which she currently coaches) and serving as a coach on U.S. Olympic and Pan American teams, amassing numerous awards and championship titles during her illustrious career.

*Tara Tansil-Gentry, a 1990 Greenfield graduate and standout basketball player with the Jackets, who went on to play at UT Martin, starting in all 105 games of her college career and leading the Lady Pacers in scoring all four seasons. She finished her college career holding UTM’s all-time record for career points and is currently ranked third.

*Bettye Giles, who started women’s athletic program at UT Martin, served as athletic director at UTM from 1952-1973, helped to create the Tennessee Women’s Sports Federation in 1966, and is widely considered the Godmother of Title IX. Her work was a key component in the Educational Amendment Act of 1972. She was recently inducted into the Tennessee Sports Hall of Fame.

*Mark Hardy, a 1988 graduate of Palmersville High School, is widely regarded as one of the best basketball players ever to come out of Weakley County. He once scored 60 points in a single game against Lake County; he received All-State honors his sophomore, junior, and senior years; and he went on to represent the U.S. in the Junior Olympic Basketball Team and play at the college level at UT Martin.

*Derrick Jones, a 1990 Sharon graduate, who spearheaded the Eagles to a rare winning season as a senior, averaging 25 points, seven rebounds, five assists and three steals per game. He received All-West TN and All-State honors and was a Mr. Basketball finalist for his outstanding performance that year. Jones was also an outstanding baseball player at Sharon.

*Popeye Jones, a 1988 Dresden graduate, excelled in basketball, baseball, and football with the Lions. He went on to become one of Murray State’s all-time top basketball players, leading the NCAA in rebounding in 1991, earning numerous OVC awards, receiving honorable mention for All American twice, and finishing his college career as the only Murray player to ever amass over 2,000 points and 1,000 rebounds. Jones then embarked on a 12-year professional career with the NBA, playing for six different NBA teams. A member of the Murray State Sports Hall of Fame, Jones currently serves as an assistant coach for the Denver Nuggets.

*Ashley McElhiney Ayers, a 1999 Gleason graduate, led the Lady Bulldogs to a state basketball championship and captured the first Ms. Basketball award in Weakley County history, finishing her high school career as Gleason’s all-time leader in both scoring and assists. She went on to play basketball at Vanderbilt, where she was named the team’s Most Outstanding Defensive Player three times and as Co-MVP in 2001 and helped the Lady Commodores to an SEC championship and a runner-up finish. Ayers was drafted by the Indiana Fever in 2003, and then became the first female to coach a men’s professional team with Nashville Rhythm in 2004. She was inducted into the Tennessee Sports Hall of Fame in 2017.

*Paul Tinkle, a graduate of both Westview and UTM, began working in radio at the age of 15 and went on to become a sports broadcasting legend, covering countless football, basketball, baseball, and softball games in Weakley County and Western Kentucky over the past 50 years. He is an inductee in the Tennessee Association of Broadcasters Journalism Hall of Fame and was recently inducted into the Tennessee Radio Hall of Fame.

*The late Graham Vowell, who was born in 1895 in Martin, attended McFerrin School and went on to play football for the Tennessee Volunteers from 1914-1916 and then again in 1921 after serving his country in World War I. During his career with the Vols, he played on the Vols’ first championship and first undefeated team in 1914, was named to the All-Southern, John W. Heisman All-Time Southern, and Walter Camp’s All-American teams in 1916, and to the All-Southern team in 1921. In 1990, he was named to UT’s All Time Pre-1940 Team and was one of three Weakley Countians named to the TN Sports Hall of Fame in 2017.

Also inducted was the entire 1965-66 Weakley County Training School basketball team, the Bombers, who won the region championship that year over Jackson Merry, advanced to the state tournament, and finished the season with a 24-4 record. This was the first time an all-black team had represented Weakley County in the state tournament prior to statewide integration in 1969.

Each of the individual inductees were presented with an award and given the opportunity to share a few words with the over 300 guests attending the banquet.

Steve Vowell, the great nephew of Graham Vowell, received the award and spoke on behalf of his late great uncle.

Also recognized at the banquet were eight recent graduates from Weakley County high schools, including a male and female athlete from each school, all who have gone on to play sports at the collegiate level. They all were awarded with $1,000 scholarships from the Hall of Fame. These scholarship recipients included Parker Ferrell and Trey Eddings from Dresden, Kolton Crochet and Carrington Lifsey from Gleason, Will Harris and Edie Darby from Greenfield, and Garner Anderson and Brooklyn Young from Westview.

John Hatler, executive director over the Weakley County Sports Hall of Fame, served as master of ceremonies during the banquet.

Hatler said he was very pleased with how the inaugural event went off and that he has received a lot of complimentary comments about it.

“I think we all felt like it exceeded expectations, and I’ve gotten nothing but positive responses,” said Hatler. “It was a great evening.”