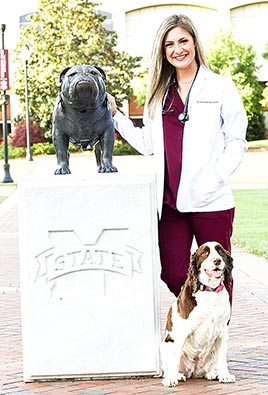 A local animal lover opted to come home and join the family of Northwest Tennessee Veterinarian Services after finished her education at Mississippi State University in May. Kendell Alexander said she is excited to return to her roots in Weakley County, reconnecting with old friends and making new ones.

Alexander, who was born and raised in Martin, joined the team at Northwest July 11. She said she has always had a passion for animals and science. She knew she wanted a career in the medical field, and veterinary school allowed her to combine both of her passions.

Growing up, Alexander said she has had furry friends such as dogs and cats, while her brother had an admiration for lizards and turtles. She is partial to English springer spaniels.

Alexander said she is excited about the new techniques and advancements in vet medicine, such as ultra-stenography, a non-invasive procedure; small animal surgery, such as orthopedic; as well as new advancements in tried-and-true treatments for dermatology.

Alexander said she is also looking forward to more hands-on experience working with Dr. (Wren) Burnley. The clinic offers veterinary medicine for large animals such as livestock and equine. She said she excited about the prospect of learning more that community pet owners can benefit from in the field of animal medicine.

For those who are considering a career in animal science or dreaming of helping furry friends, Alexander said to not give up. She added that it seems like a long process and hard work, but don’t give up because it will pay off in the end. Veterinary school is a tough road sometimes as the rate of those who graduate are lower than those who graduate from medical school.

Alexander is the daughter of Kim and Chet Alexander of Martin and her grandparents also call Martin home. She is engaged to Bronson Bass, who was recently named the county’s newest Ag Extension Agent. She met the Florida native when they both attended Mississippi State. She said they are excited about making their home in Weakley County as Bass grew up on a cattle ranch and enjoys hunting and fishing.

Meet Alexander and the team of Northwest Veterinary Services at its location on Highway 22, in Dresden.