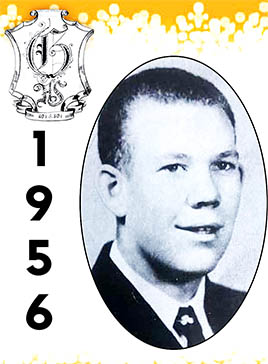 Billy Gene Verdell was born on July 21, 1938, the third child of Ray Anthony Verdell and Wulardean Wright Verdell. Billy had two older brothers, Dencil and Ray Dean, and then a younger sister, Shelby.

The Verdells lived in the Beech Springs area south of Gleason on a farm growing corn and cotton. Billy remembers not being very fond of the hoeing and picking that was required to raise crops, so he always tried to find alternate jobs on the farm, like hauling manure or helping to make the sorghum. Billy said he could be picking cotton right beside his brother, Ray Dean, and his brother picked twice as much as he did. The family also had a large number of pigs, that also required a lot of work. Mr. Billy has always thought maybe all that “hog” smell might be the reason he was always sick with asthma as a child.

Later, the family moved to the Wray house, past the Beech Springs Baptist Church. It was an older white house in the “dog-trot style,” with a big open area in the middle of house. In 1949, when electricity was finally run to their house, Billy recalls, “The first thing Daddy bought was a two-eye hot plate, so we did not have to build a fire in the cook stove at every meal. Soon came our first refrigerator, but the bathroom was still the old ‘outhouse.’”

“My grandparents did not live very far away. Every Sunday the whole family would congregate to the ‘Wright’ house for an old-fashioned dinner on the grounds. There was a big ditch close to the house and all the kids would play in it, until one day a cousin, Daniel Hall, got a severe cut on his foot. We were banned from the ditch for a few Sundays.”

Billy’s first recollections of education was attending Gleason School in the first grade, with Mrs. Virginia Edmonston Smith as his teacher. He remembers Mrs. Lottie Smyth Garrett (Haskins) being his second-grade teacher.

His family then moved to the Tumbling Creek area north of Gleason, and he attended Tumbling Creek School for fourth through sixth grade. Mr. Worth McCain taught all eight grades in one room. After Mr. Vernon Dunn took his place, the school expanded to using both classrooms, with his sister, Ms. Lucille Dunn (Lomax), teaching in the other classroom. During the last year Billy was there, the school prepared a hot lunch for the children for only 20 cents a meal, usually consisting of white beans and cornbread or biscuits.

Often the boys would tell Mr. Dunn that their father said they had to come home early to help with farm work. Instead of going home, the boys waited by the creek for the girls to get out of school. One day, Mr. Dunn saw Billy’s father at town and complained that Billy was missing too much school because of farm work. After his father had a rather extensive conversation with Billy, the boys stayed in school all day.

Around this time, Weakley County was beginning to phase out the country schools in favor of consolidating into city schools. The rule was there had to be at least 15 students in a country school for the teacher to be paid. Mrs. Lenora Williams Bradford at Hilltop Community School only had 14 students, so in his seventh-grade year, Billy was switched to Hilltop. The family moved again to the “Wray” place. He remembers that old wood stove that would fill the school with smoke on a windy day. There was always a shotgun or two sitting in the corner by that old stove. Boys would bring their guns to school so they could kill a rabbit or two on their way home for supper.

In the eighth grade, Billy and his friend Glen Williams would sneak off to Raymond Fisher’s grocery store to buy a “cold” drink. “Glen would always shake his drink on the way back, and then ask Mrs. Bradford to open it for him. She would be so mad when that drink spewed all over her.”

The tradition of stealing a wagon to put on the front steps of Beech Springs Church was a fun thing for young boys in that area to do around Halloween. “One year Mr. Gibb Wood’s wagon was targeted. Things were going well until we got the wagon almost to the church. Mr. Wood raised up from under the tarp over the wagon and said, ‘Boys you can take me home now!’”

By the ninth grade Billy was back to Gleason School. Boys will be boys, especially at school. One day a friend brought in a toy gun to school. The teacher, Ms. Lenore Bradford, saw the gun and questioned his friend about why he brought it to school. His friend said, “to shoot Mr. Moore.” Mrs. Bradford ran out of the room screaming, “Mr. Moore! Mr. Moore! He is gonna kill you!”

Billy has always been a worker. By age 16, he had a job at the Esso Service Station owned by Coy Black. Billy washed cars every Saturday and part of Sunday for $12 for both days. He bought his first car, a 1941 Ford, before he even had a driver’s license. He paid $75 for the car on credit by paying $5 a week out of his Esso paycheck. He said his brother Ray Dean drove the car more than he did. One day they decided the car needed a paint job, so the took a bucket of black paint and an old paint brush and changed the color of that car.

Billy was the first member of his family who graduated. His family was very proud of his accomplishment. After graduation, his first job was at Bay Bee shoe factory in Dresden. He rode to work every day with Joyce and Junior Watts. He worked there for nine months before securing a job with W.T. Construction Company clearing areas for new roads in the community using axes and briar blades. It sure was hard work, but he made a whole $1/hr.

He rode to work with his future brother-in-law, Gilbert Perritt. One day on their way to work they ran off the road and flipped the car several times. Billy was pinned under the car. He had several injuries, including 11 broken ribs and a skull fracture. When Dr. Porter examined him, he said, “He won’t make it to the hospital in Jackson.” Billy was in a coma for five days. It was told all over town that he had died. Folks came to Billy’s parents’ house to offer condolences, even the insurance person came to sign papers for Billy’s life insurance. Billy learned later his parents came to hospital to say goodbye, and were planning his funeral. Then somehow Billy woke up. Since the hospital had not seen any reason to set his broken jaw while he was in a coma, Billy had to endure his jaw being broken again and wired back together.

Another job Billy had was running a candy route for Roy Travillion for six years. Later he operated a restaurant owned by J. T. Jones for about a year. He soon heard from Doc Bell, the President of the Bank of McKenzie, about an opportunity selling livestock feed door-to-door in the community. So, for about 15 years he sold feed for Keco Milling Company. As he was climbing the corporate ladder, he worked for Nutrena out of Memphis and Wayne Feeds, always selling feed for all kinds of animals. His last job was with Prime Quality Feeds, where he was on the road all over West Tennessee and Northern Mississippi.

Billy had a deep bass voice and could also carry a tune. He was sought after by local churches to sing. When he attended a singing school taught by John Perkins, one day he met a beautiful girl named Virginia Perkins. Billy and Virginia only dated for four months before they were married in 1960.

After marriage, Billy and Virginia first lived in a small apartment of Mrs. Pearl Downey Bennett. They later bought a house on Phelps Street. After that, they moved to a house on Old 22, where Billy still lives today.

Virginia was a talented piano player. She was playing piano for the West Union Quartet at only 9 years old. She had taught piano at Vaughn’s School of Music in Lawrenceburg, Tennessee, in the late 50s before she met and married Billy in 1960. Her piano skills were very well known in the Gleason community, as she taught numerous children piano lessons in her home, and later also at Gleason School for 25 years. At first, her students paid 50 cents a lesson. Altogether, Virginia taught music from age 17 to about 75 years of age.

Virginia came from a musical family, and they were always singing. After Billy and Virginia married, they formed a singing group called the “Melody Makers” with her brother, Wesley, and his daughter, Kathy Perkins. Virginia was always the piano player. Later, Ray Peery also joined the group and for the last 20 years of the Melody Makers, Billy and Virginia’s son Wendell sang with them. The group made five or six records, had a radio show, and sang at every “homecoming” in the area. They even ventured to Pennsylvania to sing.

Virginia was also the pianist at Beech Springs Baptist Church for over 50 years. Every Sunday the Verdells, including their three small children, did morning radio shows, homecoming singings on Sunday afternoon after church, and then back to their home church at night, so Billy could lead the singing and Virginia could play the piano. Music was such an integral part of the Verdell’s everyday life, all three of their talented children grew up to be involved in music. Billy and Virginia lived their lives as servants of Christ, through 62 years of marriage, until her passing in 2020.

Billy’s education at Gleason High School gave him the foundation to succeed in life and he is forever grateful he had the opportunity to learn from a team of highly educated teachers who instilled in him the knowledge to succeed in life, “You have to have a good education.”