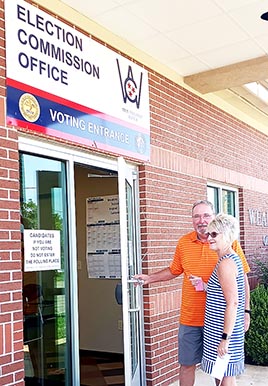 Kevin and Cindy Johnson of Gleason took advantage of the early voting period on Friday to cast their ballots for the August 4 election at the Weakley County Election Commission office in Dresden. Voters in Weakley County have two polling locations to cast an early vote, including the Martin Masonic Lodge on Highway 45 in Martin, past Westview High School. Both locations close at 4 p.m. Thursday and Friday and are open from 8:30 a.m. until noon Saturday, the final day of early voting. Photo by Sabrina Bates/The Enterprise

10 Percent of Registered Voters in County Have Cast a Ballot

WEAKLEY COUNTY (July 25) – Out of a little more than 18,700 registered voters in Weakley County, nearly 10 percent have already cast a ballot for the August 4 election. According to numbers released by the Weakley County Election Commission office, 1,814 voters have taken advantage of the two polling locations in the county as of Monday, July 25. Of those ballots cast, 1,323 claimed a Republican ticket, while 199 claimed a Democratic ticket in the state primary election. That left 292 voters not casting a vote in the state primary election. The largest one-day reported turnout for early voting was on Friday, when 241 people in the county cast a ballot.

Next week’s ballot will ask voters to select a primary candidate for both parties for Governor of Tennessee. Incumbent Gov. Bill Lee is the sole Republican candidate, while Carnita Atwater, Jason Martin and JB Smiley, Jr. are the three Democratic candidates. Lee will face the challenger in the November General Election.

The August 4 ballot also has a few contested races for County seats, including Sheriff, County Circuit Court Clerk and District Attorney General. For a detailed look at the ballot, see Pages 2B and 3B of today’s issue.

As of Monday, 258,551 Tennesseans have already voted in the August 4 election. Of those, 166,457 have cast a Republican vote, while 75,554 have voted in the Democratic primary. The largest one-day reported turnout for early voting in the state was Friday, July 15, when the early vote polls opened, and 38,780 cast a vote. The second largest early voting turnout seems in line the county’s when 34,066 people in the state voted Friday, July 22.