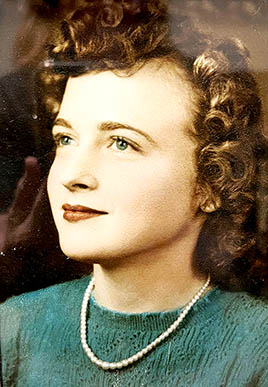 Clareda was born at home on August 11, 1931, out in the country close to Gleason. Her parents were Chester “Check” Byrd and Mary “Polly” Gwendolyn Adams. The doctor later came by to check on her and her mother. She was joined by three younger sisters: Louetta ’49, Shirley ’55, and Rachel, in the years to come.

Clareda started her school experience at Peace and Harmony School, which was east of Gleason, close to Green’s Store. She attended there for second and third grade, with Ms. Opal Richee (Dellinger) her teacher both years. At Peace and Harmony, the students had to bring their own lunches. Her family could not afford paper bags, so they would have to wrap them with whatever was available. There was a cistern beside the porch to draw water. While they lived in the country, they always walked to school, but when they started to school in Gleason, they rode the bus.

Her family moved into Gleason and lived at the Whitworth Hotel for a while. Her father later ran the restaurant below the hotel. She and her friends would get on the train at the depot across from the hotel. For 12 cents each, the girls would ride to McKenzie, where they could go to a movie.

Her mother would make all of their clothes, and she taught her girls how to sew. When they would ask for something new, she would use material from a feed sack, as they had no money for new fabric. Clareda always carried a safety pin with her. “We did not have elastic in our pants, so I carried that safety pin in case I ever had a need to use it.” The girls always had to wear long stockings using rubber bands to hold them up because girls were not supposed to allow their legs to show. The rubber bands would not hold the stockings up, so, “As soon as we would get out of mama’s sight, I would take them off!”

At home, they churned milk to make butter. They had a cistern where they drew the rainwater. A film which included leaves and bugs would form on top of the water. They would have to scoop it off to make the water more palatable to use. They had an outhouse with two seats, and would race to the toilet in the morning with the little one always last.

The games they played were of their own making. They would draw off a hopscotch grid in the dirt, make cakes from dirt and water. They played a game of going out to the field and grabbing onto a cow’s tail. When the cow started running, they would bounce up and down over the ground. “It was more fun.” In those days, oranges were hard to come by and therefore a real treat.

When she started to high school, she went to Gleason. “When I grew up, I wanted to be a teacher. I looked up to them and wanted to be like them.” Clareda especially admired the principal, Mr. Charlie Butler, who took her under his wing in high school. From the time she got to high school, she felt like Mr. Butler saw something special in her. He would call on her to go to the board and work problems because he knew she had done her homework. “I was just a little country girl, but Mr. Butler picked me out to be the best and I tried not to disappoint him.” He helped her write her valedictory speech. “I practiced and practiced to get it just perfect.” Rozelle Ozment (Wiseman) was a sweet girl and was the salutatorian that year. The two girls were friends and were always running neck and neck with grades through high school.

Special friends of Clareda’s in high school were the Big Seven: Rogerlene Johnson (Maddox), Joan Hicks (Hobbs), Patty Wilkes, Helen Brawner (Dale), Geraldine Taylor (Eva), and Margaret Ann Hodges (Calvert). Clareda was the seventh. They all graduated with Clareda in 1949. She remembers spending many nights at Margaret Ann’s house and dated her brother, John Robert, for a little while. Another good friend was Sarah Anne Collins (Gallimore), whose home she loved to visit. She also enjoyed spending the night with Patty Wilkes.

As the valedictorian of her class, Clareda was awarded a scholarship to Bethel. She and Joe Mansfield continued to date, and they were getting serious at the time. He told her, “No, you are not going to college. You will go off and forget all about me.” Joe was going to the Navy. He was gone a year and got his GED while he was there. When he got home, they married later in 1949.

Joe’s parents were “Mawmaw” Ada Adell Ross Mansfield and “Pa Beck” Sylvester Atlas Mansfield. He had six brothers and sisters. After their marriage, Clareda went to work for Paul Brummitt in the Dry Goods Store with Mrs. Idella Call Goodin. Then the young couple moved to Lansing, and lived there for about a year near Cadillac

Clareda and Joe had four children, three boys and then a girl; Joel, Timothy, Jonathan, and Terri.  She knew how to sew from her mother, so she made all her children’s clothes. She and Joe reared their family in Tullahoma, Tennessee. They were married for 55 years before Joe died in 2012. “We had a good life and have a wonderful family.” Clareda recently moved to Franklin to be near her daughter, Terri. She remembers her Gleason roots with fondness.