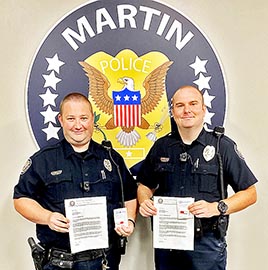 MARTIN (July 5) – The Martin Police Department and Martin Board of Mayor and Aldermen have honored two officers for life-saving actions during a call for an unresponsive person last month. A press release issued by the MPD notes, “On June 6, 2022, at 9:05 p.m., Martin Police Department Officers Kelly Hendon and Cody Stewart were dispatched to a call in the city pertaining to an unresponsive individual in a vehicle. When the officers arrived, it was determined that the person may be under the influence of narcotics. Both officers moved the subject outside of the vehicle and began to render aid. They both utilized their Narcan doses and eventually revived the victim.
The officers kept the victim awake and continued to render aid until personnel with EMS arrived on the scene. Due to the officers’ actions, the victim survived the incident, the release further notes.

“We are very proud of both Officer Kelly Hendon and Officer Cody Stewart for their professionalism, calm demeanor and for putting their training in to action to save this subject,” MPD Assistant Police Chief Phillip Fuqua noted.

Both officers were awarded life-saving medals and commendations at the July 5 City of Martin board meeting by MPD Chief Don Teal.