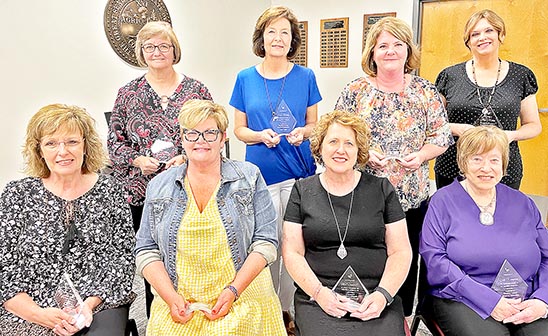 RETIREES HONORED BY SCHOOL BOARD – The Weakley County School Board recognized retirees at the June board meeting in Dresden. Tenures from 21 to 42 years were represented in the group of eight who could attend including (Seated, L to R) Phyllis Gearin, Kim Castleman, Deborah Perkins, Beth Kempton, (Standing, L to R) Debra Simmons, Gwen Hardy, Melissa Stafford, and Judy Martin. Unable to attend were Jeanie Travis, Robin Pape and Zann Wortham. For the complete story, see Page ? of today’s edition of The Enterprise

The board meeting included the board’s positive annual evaluation of Director Randy Frazier, approving a policy change allowing more students to be eligible to participate in honors classes and introducing in a first reading a policy change to reflect current practice of requiring a background check for teachers every five years. Also approved were adding middle school softball at Gleason and golf and volleyball at Martin Middle. Due to an increased travel schedule and conflicts with set dates, Vantrease, asked for and received, agreement from board members to adjust August through December board meetings to the second Thursday of the month.

Regarding Frazier, Vantrease said his combined score from evaluations received from board members resulted in an “exemplary rating.”

Retirees received an engraved plaque “for dedicated service to the teaching profession” and were celebrated at a reception following the meeting. Those in attendance were:

Deborah Perkins, the Supervisor of the Special Education Department since 2012, who is concluding a 40-year career in education spent in Henry County and Weakley County.

Phyllis Gearin, math teacher at Gleason School, who started teaching in the 1982-83 school year at Dresden High and moved to Gleason School in 1990, where she is ending her 34-year career.

Debra Simmons, who spent the entirety of her 33 years in Weakley County as a teacher at Palmersville and then Dresden Elementary School.

Melissa Stafford, English teacher, who spent one month at Greenfield School in the 1991-92 school year and then moved to Gleason where she remained for 31 years.

Kim Castleman, retiring from Martin Primary with 28 years in the field, who began as a teacher in 1994, then spent time at the Northwest Center of Regional Excellence and teaching in McKenzie before returning to Weakley in 2018.

Beth Kempton, Weakley County Schools Nurse Supervisor and Westview nurse who began with the county in the 1999-2000 school year and built the current school nurse program over the course of 23 years.

Judy Martin, the Greenfield School librarian, who devoted her 22-year career to the Milan and Weakley County school systems.

Gwen Hardy, whose 21 years in education were all spent at Dresden Elementary.

Retirees unable to attend the evening event were Jeanie Travis, a consulting teacher with the County’s Special Education Department, who is concluding a 42-year career; Robin Pape, who ended her 29 years in teaching with a final stint at Martin Elementary and Dresden Elementary where she taught music; and Zann Wortham, who retired from Martin Primary in July 2021 after 20 years and returned part-time as a reading interventionist currently serving at Sharon School.