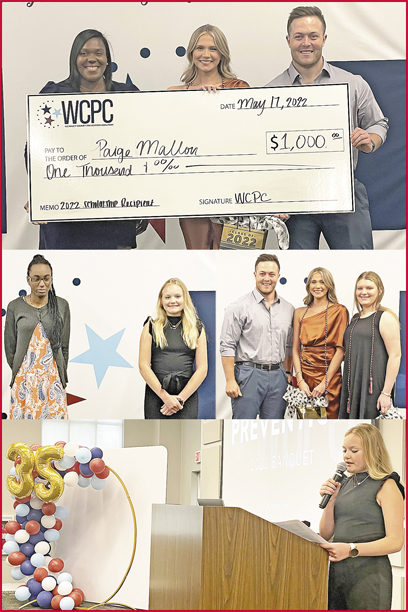 The Weakley County Prevention Coalition hosted a night of celebrating 35 years of prevention in Weakley County as the 4th annual member appreciation event included a catered meal at the Martin Event Center and recognitions, highlights from history, and addresses from Youth Coalition members.

When Coalition Director Courtney Echols took the stage, she reflected on noteworthy WCPC accomplishments including having achieved the goal of having one permanent Drop Box for safe disposal of unwanted, unused, and expired medications in every incorporated town in the county, training more than 200 youth leaders through summer leadership camps and conferences and close to 125 servers and bartenders in WCPC’s Responsible Beverage Service Classes. She also underscored that in the past two years, WCPC has increased funding, fundraising, and staff by more than 50%.

Recognitions included Outstanding Youth Advisor. Beth Kempton, who is retiring from Weakley County Schools in her roles as both School Nurse Supervisor and nurse for Westview, was honored for having been “instrumental in keeping Weakley County Youth Coalition going.” Dresden nurse Dian Lillegard was also recognized for her role as the advisor at DHS and for now assuming the additional responsibilities of Supervisor of School Nurses for the county.

In the first of two youth presentations, Annabelle Lovell, who was later named the WCPC’s Emerging Youth Leader, acknowledged that at 13 years old, she is one of the youngest student advocates at the prevention coalition, and added, “But I think I’m at the perfect age to make a difference in my school and community.”

She cited CDC statistics such as in 2021 about 1 out of every 35 middle school students reported they had used electronic cigarettes in the past 30 days and 16% of young people aged 12 to 20 reported drinking alcohol in the same time frame. She also noted a 2018 study that 11.7% of 12-year-olds and over reported illicit drug use in a 30-day period.

The Greenfield 7th grader, shared her experiences as part of the WCPC such as attending Tennessee Teen Institute Camp, participating in the coalition’s membership drive, and applying and acceptance as a TN STRONG (Tennessee Stop Tobacco and Revolutionize Our New Generation) Ambassador. She said she will return to TN Teen Institute Camp this summer and attend the mid-year training Institute for Community Anti-Drug Coalitions of America in Orlando.

“What I have learned over the last year is that you are never too young, or too old, to make a difference. I am so grateful for all the wonderful opportunities that I have received thanks to the Prevention Coalition. I know the future is bright for Weakley County and its citizens because they are working hard to make sure our community is a better, safer place for kids and adults,” she concluded.

Paige Mallon, a senior at Dresden High School and president of the Dresden Youth Prevention Coalition for the last three years, represented high school coalition members. She opened with a personal account of her family’s home hit by the December tornado and compared the experience of watching “leaders fighting winds, trees, and everything else you can imagine getting to me and my family” to that of the ongoing work of the coalition.

“The coalition does not wait for someone to come knocking on the door, begging for help,” she said. “We work so maybe no one has to ask for help. So, everyone knows what to do in a certain drug situation or how to properly inform someone of their addiction. We help without being asked because that is our passion.”

She noted that as a TN STRONG Ambassador, working along other ambassadors from across the state, she was told to pass along the “message of WOW” as other groups have seen and followed the model of WCPC events in their own communities.

Having participated in the five-day Tennessee Teen Institute camp on drug prevention for two years, this summer, she will serve as a leader for incoming campers.

Asserting that the coalition caused her to grow from a “shy, self-conscious girl” to a “confident leading woman,” she acknowledged those who have been by her side, “The Coalition will forever have one of the greatest impacts in my life. I will never forget my time with you all and I have to thank you all for forming me into a leader.”

Mallon was then recognized with the Dedicated Service Award and received Weakley County Prevention Coalition’s Outstanding Service and Leadership Scholarship for 2021-22.

Director Echols noted when gifting the $1000 scholarship to Mallon, “It’s been amazing to watch her grow and develop over the past few years and I couldn’t think of anyone more deserving of this award.” Mallon plans to continue her education at the University of Kentucky this fall.

In other presentations, seniors Jacey McClure of Dresden High and Mallon received graduation cords to be worn during Friday’s graduation ceremonies to “represent the countless hours of service the students have dedicated during their time as youth coalition members.” Lovell and Lilli Brock from Westview received scholarships to attend youth training in Orlando.