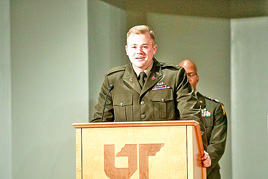 Casey Wright, of Martin, was commissioned as a second lieutenant in the United States Army during a ceremony May 6 at the University of Tennessee at Martin. He earned a Bachelor of Arts in Political Science during commencement exercises May 7. Wright served for three and a half years active duty and two years in the Tennessee National Guard. He is the recipient of the George C. Marshall Leadership Award and is a Distinguished Military Graduate. Wright will be stationed at Fort Hood, Texas, after training. For more information about UT Martin’s Department of Military Science and Leadership, visit https://www.utm.edu/departments/milsci/.