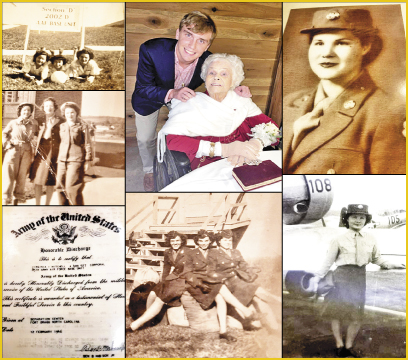 ***Editor’s note: Greenfield School Class of 2022 graduate Will Harris was recognized during his senior year of high school at a recent University of Tennessee at Martin Interdisciplinary Student Writing Conference (ISWC) while taking Dual Enrollment courses at Greenfield. He was one of two students earning recognition and chosen by Dual Enrollment Instructor Jane Nordberg. Harris chose his great-grandmother’s enlistment in the Women’s Army Air Corps during World War II as the subject of his research paper. Below is his research paper submitted December 10, 2021, for his English 111 class.***

There are six branches of the U.S. Armed Forces known today. These include the Army, Air Force, Coast Guard, Marines, Navy, and Space Force. The history books and courses tell us about their significance in gaining and maintaining our freedom. Men and women are members of these military branches, but women were not always soldiers. The little I know about the Women’s Army Air Corps (WAAC) is due to the fact that my fraternal 99-year-old great-grandmother, Virginia Mitchell, served in the Army during WWII. Her service makes me proud, and it also makes me want to learn more about the WAAC. It no longer exists, and I want to know what happened to end it. My goal during this research is to learn and prove that members of the Women’s Army Air Corps played a crucial role in America’s military history.

According to Britannica.com, the Women’s Army Air Corps was created during WWII so women could serve, other than nurses, for the first time in a noncombat position during the war. It was in May 1941 that a female Representative of Massachusetts introduced a bill to Congress for women to join the army and receive benefits and pay like men. The bill was not supported until after Japan bombed Pearl Harbor in December 1941. Months later, the bill resurfaced and was passed into law on May 15, 1942. “The law that established the Women’s Auxiliary Army Corps (WAAC) gave its members, called Waacs, an official status and a salary but few of the benefits granted to male soldiers. In July 1943, after thousands of women had enlisted, the U.S. Army dropped the “auxiliary” designation, and from that time on members of the Women’s Army Corps received full U.S. Army benefits” (Britannica.com). Applicants had to be American citizens between the ages of 21 and 45, single with no dependents, be at least 5’ tall and weigh 100 pounds or more (Bellafaire). My great-grandmother signed up to join in December 1942 after she had completed courses at the Memphis School of Commerce. Then she had to wait until after her 21st birthday in January 1943 for her orders, and when they came in a few weeks later she boarded a train from Memphis to Nashville. From there she traveled with other female recruits in a canvas-tented truck to boot camp at Fort Oglethorpe, Georgia (White). Across America, there were five military training centers that had been set up for women recruits to attend boot camp (Women’s Army Corps).

The Women’s Army Air Corps served many purposes during WWII. One of the main reasons women were needed during WWII was to fill positions normally assigned to men, because the number of available men was low. Women filling these positions freed up men for the more urgent need of combat duty. Women proved they were capable and willing to answer the call to arms in ways other than nursing to contribute to the war effort. They trained and performed a variety of jobs including: Clerical assignments, radio operators, electricians, and air traffic control operators (Britannica). They trained to be sheet metal workers, parachute riggers, bombsight maintenance specialists, aerial photograph analysts, lab technicians, and cryptographers. Some participated in the Manhattan project and conducted experiments connected to the atomic bomb (Bellafaire). According to “History of the WAC & Army Women,” many women served overseas during the WWII campaign. They served in England, Africa, Italy, Asia, India, Egypt, and Australia (Women’s Army Air Corps).

My great-grandmother first served by compiling daily reports, operating adding and ditto machines, filing, typing and taking shorthand as an office clerk at Military Headquarters, Langley Field in Virginia. But she spent the majority of her time as a Control Tower Operator at Stewart Air Field in New York. There, she said, the military trained West Point Military Cadets who piloted three aircraft bombers: The AT-7, B-25, and B-17. She said planes were taking off and landing on the airfield 24 hours a day. Her duties included telling pilots what speed and altitudes to fly in and out, and keeping them updated on weather conditions. To further her aircraft knowledge she completed 21 hours of training in a pilot simulator. All military personnel had nicknames, and hers was Billie Mitchell. This was a reference to William (Billy) Mitchell, a WWI pilot, who is referred to as the Father of the Air Force (White). He strongly supported the need for air superiority and air command to be its own military branch. He campaigned for years and was regarded as a visionary and a controversial and turbulent advocate for air power. A decade after his death, the Air Force became a separate branch of the military in 1947, and the Army Air Service no longer existed (Jones).

During WWII, 150,000 American women served in the army (Bellafaire). Following the end of the war, the number of women serving in the WAAC dropped by 79 percent. This decrease in numbers caused a change in policy for integration in the armed forces. The decision was made to disestablish the WAAC (Britannica). Women began to serve in the same units of the armed forces as men after President Harry Truman signed an Integration Act on June 12, 1948, permitting women to join the regular army at the age of 18 (Women’s Army Corps). My great-grandmother was asked to re-enlist and enter officer’s training school, but she declined and returned to Memphis. She said horrible stories were being told about the treatment of captured women overseas, and that scared her (White).

A shortage of available men stateside during WWII made it necessary for women to learn a variety of jobs previously held by men for the war effort in a variety of ways. “The Women’s Army Corps was successful because its mission, to aid the United States in time of war, was part of a larger national effort that required selfless sacrifice from all Americans. The war effort initiated vast economic and social changes, and indelibly altered the role of women in American society (Bellafaire).” President Harry Truman said the war could not have been won without the contributions of women in the military (Women’s Army Corps). My great-grandmother, now Virginia White, served three years with the 85th Army Air Force Base Unit as Virginia Mitchell. She attained the rank of Lance Corporal and received four medals for active duty. They are the Good Conduct Medal, WAAC Service Medal, American Theater Service Medal, and the WWII Victory Medal. She was honorably discharged on February 12, 1946, at the age of 24. She returned to Memphis and worked for the Veteran’s Administration. While there she met and later married Bill White, a WWII Navy Lieutenant. They were married for 59 years and had nine children — eight girls and one boy. Including bonus children there are 28 grandchildren, 41 great-grandchildren, and one great-great-grandchild. My great grandmother has never taken advantage of her military benefits, but she said she wants a military funeral when her time comes (White).

According to my grandmother, daughter #3, her mother did not talk much about being in the military until many years later. “We had to prompt her to tell us about that time in her life (Harris). She told her daughters that she learned everything she could, followed orders and didn’t ask many questions, got homesick, and made many friends. She never said anything about being discriminated against or mistreated. However, she did receive a few marriage proposals – one from a pilot who took her up in his plane and showed off doing flips, but she said no. She said the most fun was during R & R, when she and her girlfriends enjoyed going to the shore and swimming in the salty ocean. She said they toured places in New York City including the Empire State Building. She told that many of the girls were Catholic, so they ate fish on Fridays. She kept that tradition for many years as a tribute to her former Italian comrades. She remained regimented her entire life, followed the rules and lived close to the earth. She liked being 2nd in command and was somewhat like a drill sergeant. She, along with our father who was the head of the house, prepared nine children for life with methods very much like boot camp (Harris).