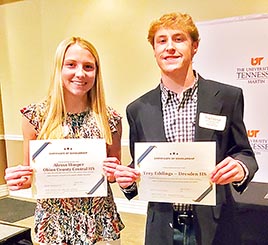 Two athletes were chosen as recipients of a $500 Jim Cawley Scholarship. They were (L to R) Alexus Hooper of Obion County Central High School and Trey Eddings of Dresden High School.

MARTIN (April 27) – Jim Cawley was a legend in broadcasting. He broadcast thousands of sporting events in Northwest Tennessee. For more than 35 years and more than 3,000 games, Cawley was the voice of Obion County high school sports. He covered mostly Union City athletics, but also broadcast both Obion County Central and South Fulton preps as well. To honor Jim Cawley’s legacy, WENK and Froggy 99.3 created the Jim Cawley High School HERO Athlete program. This year marked the first event, but WENK and Froggy 99.2 representatives said they want it to continue and become an annual affair.

“I think it is a great way to honor student athletes whose work ethic rises above others. Trey Eddings is one of the finest young men and a great leader to those around him. I think Mr. Cawley or any broadcaster would have loved calling Trey’s games. He would have appreciated what he does on the football and baseball fields. His courage is great, and it helps him succeed in sports. I hope you continue the program. As an educator, coach, and administrator for 26 years, I appreciate the time that he put into broadcasting games. The HERO program should grow,” Dresden High School Principal and Athletic Director Scott Killebrew said.

UT Martin Chancellor Dr. Keith Carver was the master of ceremonies for the Jim Cawley High School HERO Reception and Award Ceremony held Wednesday, April 27, in the Boling Center Ballroom on the campus of UT Martin.