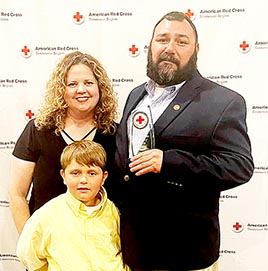 Jason Hypes is pictured with his wife Samantha and their son, Asher, during the annual American Red Cross of Mid-America Heroes Luncheon held April 27 at Union University. Hypes received the Uniformed Hero of the Year award during the event. He serves as the Assistant Director for Weakley County’s Emergency Management Agency.

JACKSON (April 27) – Weakley County Emergency Management Deputy Director Jason Hypes was honored at Union University in Jackson by the American Red Cross of Mid-West Tennessee. During the Red Cross’ annual Heroes Luncheon, held April 27, at Union University’s Carl Grants Events Center, Hypes was chosen as the Uniformed Hero of the Year for his work during and after the December 10, 2021, tornado tore through parts of Weakley County, near Dresden and its downtown area.

“I was honored to receive the award, however, no award like this is won by one person. It takes the entire community, such as the leadership of the mayors and Ray Wiggington, with EMA responders, who actually were the first ones out the night the tornado happened, and the amazing people who have been working long-term recovery like Tommy and Karen Wilson and Miss Joyce Washington,” Hypes shared.

The University of Tennessee at Martin was also recognized April 27 for its support of the Red Cross following the December 10, 2021, tornado outbreak in Northwest Tennessee. The American Red Cross of Mid-West Tennessee presented its 2022 Outstanding Community Partner Award to the university during the annual Heroes Luncheon. The annual event honors local individuals and organizations for service and raises funds to support the Red Cross. UT Martin Chancellor Keith Carver, an American Red Cross Mid-West Tennessee board member, was the keynote speaker.

The Outstanding Community Partner Award honored the university’s support for the agency during initial recovery efforts from tornadoes that caused widespread devastation in Dresden, Kenton, Samburg and other areas. David Hicks, American Red Cross Mid-West Tennessee executive director, said that community partners are important to the Red Cross and the organization’s ability to deliver services when needed.

The Red Cross contacted Carver the day following the outbreak and requested space to house trucks and supplies. The university found ways to do much more and provided space in the Boling University Center for an emergency command center, housed volunteers in a residence hall, and provided the requested space for vehicles and supplies. “We did also have some groups who went out and helped the Red Cross,” Carver said, and he thanked student housing, the physical plant, public safety, and other university areas and individuals who made the arrangements with the Red Cross possible.

The Red Cross continued operations at UT Martin through December and served Dresden, Kenton, Samburg and Tiptonville. “They (the Red Cross) were great partners,” Carver said. “They left things better than they found them, and we were just happy to be able to help in some way.”