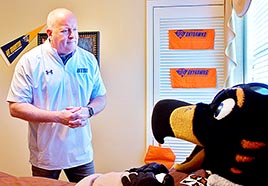 Captain Skyhawk “faked” an illness to get out of a home Skyhawk game this year and instead went door-to-door raising money for the annual Captain’s Challenge. The Captain is pictured with UT Martin Chancellor Dr. Keith Carver.

MARTIN (April 11) – The University of Tennessee at Martin set new records of $470,000 raised and approximately 1,400 gifts for the eighth annual “Captain’s Challenge—Captain Skyhawk’s Day Off” in less than 24 hours on April 6. The records were achieved in fewer than 24 hours, which left plenty of time for Captain to make it back to his residence hall room before anyone realized he had taken the day off.

This year’s Captain’s Challenge theme was based on the popular 1986 film, “Ferris Bueller’s Day Off.” Viewers saw Captain Skyhawk fake an illness to get out of attending a home Skyhawk game so he could fundraise for Captain’s Challenge instead. With the help of two students, Captain went door to door searching for donors. Through these efforts and the help of the UT Martin community and alumni, the goal of $400,000 was exceeded with more than five hours remaining in the day.

The UT Martin Office of Alumni Relations begins searching for matching donors in the fall semester ahead of the spring event. On April 6, the office tracked donations made by students, alumni, faculty, staff and community members at https://challenge.utm.edu.

“For the past eight years, UT Martin alumni and friends have increased their level of support year after year,” said Jackie Johnson, assistant vice chancellor of Alumni Relations and Annual Giving. “Through Captain’s Challenge, it’s evident the level of care our alumni have in regard to their alma mater.”