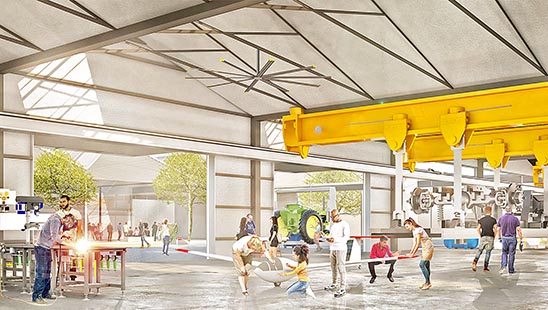 This artist rendering of UT Martin’s proposed TEST Hub shows potential uses of space for engineering and other projects. The facility is a joint effort by UT Martin, Tennessee Colleges of Applied Technology and Dyersburg State Community College to support and expand workforce and economic development in rural Northwest Tennessee.

The TEST Hub will be located on the west side of the UT Martin main campus and combine educational facilities, entrepreneurial centers and manufacturing workshops surrounding a shared industrial maker space. Through partnership with the Tennessee Colleges of Applied Technology and Dyersburg State Community College, the facility will offer educational opportunities at the certificate, associate and bachelor’s degree levels, as well as career and technical education (CTE) opportunities for the region’s high schools.

The concept for the facility was introduced in 2016 under then UT Martin interim chancellor Dr. Bob Smith and unveiled in a student-design project that was initially named The Garage. In a 2016 message in the university’s Campus Scene alumni magazine, Smith wrote that the planned Latimer Engineering and Science Building, a $65 million project made possible by a $6.5 million gift from Union City’s Bill Latimer now set to open in fall 2022, and the proposed Garage would become transformational projects for workforce development. “These new facilities will give our graduates a leg up on the competition with high-tech training and hands-on, real-world experience working with local industry leaders,” he wrote.

Dr. Keith Carver became UT Martin chancellor in January 2017, and along with industry representatives, donors and UT System President Randy Boyd, continued to seek support for the project that was renamed the TEST Hub in June 2021. Dr. Shadow Robinson, UT Martin College of Engineering and Natural Sciences dean, wrote about the project’s significance in a letter to university supporters. “This project is not only a top educational priority for the University of Tennessee at Martin, but also a top priority for future economic and workforce development for the region we serve,” he wrote.

In the same letter, Robinson explained the reasoning behind the new name.

“The (TEST Hub) captures the nature of the facility as one where the future economic- and-workforce development partners with the educational offerings of a strong university,” Robinson wrote. “Our marketing contacts are excited about this change and believe it will strengthen our ability to support industry recruitment into the region.”

“The TEST Hub will help meet the demand for technical jobs in West Tennessee as our economy grows,” said Stevens, a UT Martin Alumnus. “It will play a critical role in developing a strong workforce in our region which will help recruit more businesses and spur economic development. I look forward to the completion of this facility. I am confident it will tremendously benefit our area for many years to come.”

Funding for the TEST Hub comes at a key time for support of the Ford Motor Company’s Blue Oval City development at the Memphis Regional Megasite. The $5.6 billion dollar investment by Ford and SK Innovation was announced in September 2021 by Tennessee Gov. Bill Lee. The facility will produce the first all-electric F-Series trucks. The educational partnerships in the TEST Hub will be crucial in supporting the university’s existing industrial partners, such as Williams Sausage and Stanley Black & Decker, and the new Ford facility and suppliers it will bring to the region.

“The Tennessee General Assembly’s funding of the TEST Hub adds a critical piece to UT Martin’s role in Blue Oval City’s future success. Along with the Latimer Engineering and Science Building, the university is positioned to be a major partner in a project that will change lives for the better in West Tennessee,” Carver said. “We’re grateful to members of the Senate and House across the state and to UT President Randy Boyd who share our vision for the region’s future.”

More information about the proposed TEST Hub, the Latimer Engineering and Science Building and UT Martin STEM programs is available by contacting Robinson at srobin47@utm.edu or call 731-881-7380.