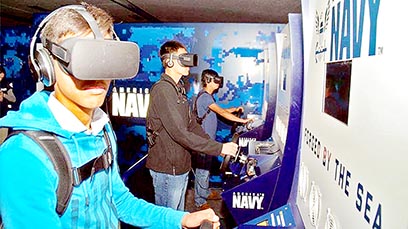 UNION CITY (April 25) – Discovery Park of America is hosting its annual Military History and Armed Forces Symposium Friday, April 29 through Sunday, May 1, 2022. The event has grown significantly larger than previous years and will feature a variety of programs and interactive activities that explore the past, present and future of the American military. All active military, veterans, their guests and student groups will receive free admission to Discovery Park during all three days of this event.

In addition to bringing back the Lantern Walk this year, the event will include a members-only reception with entertainment provided by Operation Song and an early American folk dance with live music and dance instruction provided by the 52nd Regimental String Band. The band will also be performing during a church service held on Sunday morning.

This week, DPA announced even more military vehicles, the U.S. Navy “Nimitz” Virtual Reality Experience and a never-before-seen exhibit have been added to the 2022 Military History and Armed Forces Symposium. In addition to the rare appearance of a Black Hawk helicopter, guests will be able to experience an M113 armored personnel carrier, Oshkosh M1070 tank transporter tractor unit and more. The 360-degree virtual reality “Nimitz” provides a view of what it’s like to be on a Special Warfare Combatant-Craft crewmen mission in America’s Navy. The Nimitz will be open to visitors 14 and older. All participants must register either onsite or online prior to the event. Guests 17 and younger will need to present a waiver completed by a parent/legal guardian or have completed online registration in advance request a link by emailing education@discoveryparkofamerica.com.

Local Civil War memorabilia collector, Jason Pate, will be sharing some of his collection of rare photos in a special exhibit and presentation, “Hearing Voices of the Past Through Imagery.”

Friday’s events have been designed with students in mind and will provide both military- and history-related content perfect for school groups.

“For guests passionate about history and the military, this symposium is going to provide a lot to discover,” said Dr. Julie Hill, education events coordinator and lead member in planning the symposium. “Our education and exhibits team have put together three days that are packed with incredible activities highlighting our country’s military past, present and future.”

The list of those presenting from the main stage this year includes:

* Kevin Rumley, USMC, musician who made his personal journey from life as a homeless veteran suffering from drug addiction to a college graduate with a master’s degree in social work

* Dr. David Coffey, professor of history at the University of Tennessee at Martin and author of several books, including “In Harm’s Way: A History of the American Military Experience”

* Wanda Nelson Castellaw, Tennessee native with a bachelor’s degree in psychology, a master’s degree in educational psychology and a passion for supporting military spouses

* Lt. Gen. John Castellaw, USMC (Ret), founder and CEO of Farmspace Systems, a company specializing in drone and aviation technology in agriculture, and 36-year veteran of the Marine Corps, where he held several commands, including chief of staff for the U. S. Central Command during the Iraq War

Those attending the event will also want to spend time exploring Discovery Park’s Military Gallery that can be found on two levels of the museum. The lower level contains a collection of military vehicles and weapons, as well as displays about the Korean War, the Vietnam War, the Cold War and our current military conflicts. Displays about the Civil War, World War I and World War II can be found on the entry level, as well as an oral history theater that showcases stories shared by veterans.

Those with an interest in Civil War-era photos will appreciate “A Country Divided: Photos from the Civil War,” an exhibit of rare Civil War photos and artifacts that is making its world debut at the event and will be on display through May 25, 2022.

Designed by Discovery Park’s collections and exhibits team featuring items from the collection of Jason Pate, it consists of several early photography examples depicting soldiers that either lived in or traveled through Obion County and the surrounding Tennessee/Kentucky region during the Civil War. Guests will learn of the main photography mediums used during this time (ambrotypes, tintypes and cartes de visite) and of the soldiers’ stories that have survived along with their 160-year-old photographic counterparts on display.

Jason Pate, an award-winning educator currently employed with Obion County Schools, is an avid collector and “caretaker” of Civil War history. Using his nationally published collection, Pate has told, and brought to life, the stories of hundreds of Civil War soldiers from both sides of the war.

All the programs, panel discussions and other events during the symposium are included with park admission or membership. Tickets to the Lantern Walk, members-only reception and an early-American folk dance are free but limited and must be reserved at discoveryparkofamerica.com/event/military.

All active military, veterans, their guests and student groups receive free admission all three days of the event. Group leaders wanting to request scholarships for student groups should email Sheridan Wells at education@discoveryparkofamerica.com or call 731-599-1132.

For a full list of events and biographies on the special guests, visit discoveryparkofamerica.com/event/military.