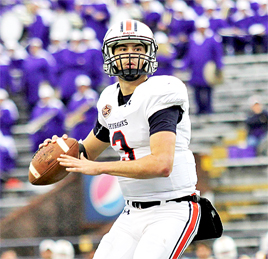 Dresden High School alum Dresser Winn will host a football camp next month at UT Martin, for children ages 5-1. Westview High School football quarterback and Alabama-signee Ty Simpson is slated to be an instructor at the camp as well. Winn is pictured with a Skyhawk teammate.

Dresser Winn was an all-state quarterback for Dresden High School … and a pretty good one, too.

Things were looking good for the prospect when he decided to play for UT Martin. The Skyhawks feature a strong quarterback history.

Sadly, things haven’t gone the way he’d have liked. He was demonstrating the promise he showed as a freshman before he suffered a season-ending injury. After a redshirt year, he bounced in and out of the lineup, finding much success as a punter.

During the COVID spring season, he broke his leg in a game against Austin Peay and, again, was lost for the season.

He got sage advice from his father, Peanut Winn, who suffered a season-ending knee injury in the football opener of 1987, but rebounded, thanks to hard work, to turn in an all-state basketball season.

“I remember sitting in the ambulance, telling my dad that I’d never play again,” Dresser said. “My dad told me that if I wanted to, I will.”

During the 2021 season, Winn said his leg hurt for much of the campaign and he contemplated hanging up the shoulder pads. By the end of the season, he said he started feeling like the Winn of his earlier days. On a windy afternoon during the FCS playoffs at Montana State, Winn returned at quarterback.  He decided right then and there he’d stick around for another year.

“Like Tua (Tagovailova, former Alabama quarterback who was often injured), you could sit back and take it, or work hard to get better.”

Obviously, Winn took the road less traveled and will return to UTM while completing his master’s degree.

Campers will be instructed in all phases of the game. The older players will take part in 7-on-7 action in the afternoon while the younger players will participate in a scrimmage.

“I think I can relate to a lot of kids,” he said. “I played football, baseball and basketball. If there’s something that could be done, I think I’ve done it. If kids have questions, I feel like I can relate to it,” particularly perseverance.

Alabama signee Ty Simpson will be one of the instructors at the camp.

“Ty is like a brother to me,” Winn said

Many of the other camp instructors will depend upon who is on campus at the time.

“I’ve thought about this for a long time. This is my last year at UTM and I’ve never really had an opportunity to give back, except maybe to read at schools or help with tornado relief,” he said. “UTM has a great camp, but I wanted to take this opportunity to help the kids.”

All participants will be invited to stick around for an opportunity to show skills they may have learned by taking part in the camp by playing in a flag football game. High school athletes will have the opportunity to play with and against Dresser and his friends. A portion of the ticket purchases will be donated to the Dresden Tornado Relief Fund.