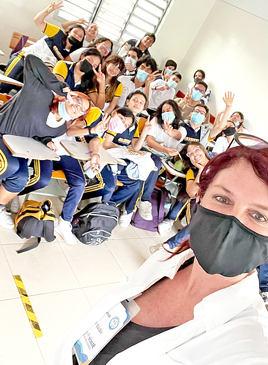 Stacie Freeman teaches a dual enrollment sociology class to Weakley County students. As the Director of Bethel University Global Studies, she also provides students the opportunity to travel to countries like Colombia. She is shown here taking a “selfie” with English students in Colombia who connected with Greenfield sociology students for a time of cultural exchange.

When she took 15 university students and friends of the program to Colegio Americano in Cali, Colombia, in March, she planned to expand the audience with which English students there could practice by setting up an online exchange with her Greenfield Sociology 111 students. Freeman travels from McKenzie to Greenfield three days a week to present the principles of sociology to seniors who will receive three hours of college credit upon completion.

Teacher Julie Sims, who oversees the Greenfield class study time on the other two days, ensured the Tennessee students were connected and could view each other on screens. The exchange came in the form of questions and answers between the Colombian group of 40 students and the Greenfield group of 12. Topics ranged from medical care to differences in technology.

In a later interview with the Greenfield students, talk ranged from similarities to differences.

Kayleigh Baxter and Paige Glisson were surprised by how similar the Colombians lives were to their own. “There were a lot of similarities. We all do the same things, go to the same places, hang out with our friends,’ noted Glisson.

Rilee Ricketts pointed out the Colombians favor soccer and volleyball.

“Around here it’s football and basketball,” she underscored. She also observed the surprise of the Colombian students that students here drive cars every day to school while there they ride the bus.

When asked about the language divide, Greenfield students acknowledged they had studied Spanish but were happy the conversation was in English. Tyler Ricketts reported, “They did better in English than we would have speaking Spanish. I wouldn’t have gotten nearly as far.”

Three out of the 12 have previously travelled internationally to Costa Rica, Mexico and the Turks and Caicos Islands. They were in unanimous agreement that they wanted to do such travel in the future – though two expressed a fear of flying.

Taniya Williams who previously went with Freeman on a Bethel University Global Studies trip to Costa Rica and worked with an animal rescue group said she would like to visit other countries to do ministry. Edie Darby agreed, “Travel for a purpose is more exciting than travel for vacation because you have that purpose. You want to change something.”

Destiny Griffin, who has a career goal of being a radiation therapist, said the conversation and the dual enrollment course has helped her “see the different perspectives of the world than we’ve always been taught” and she hopes to travel in the future because, “I’ve been raised here, and I need something new.”

“We examine issues from various perspectives and practice critical thinking skills,” she points out. “I want to give them the opportunity to delve deeper into subjects.”

The students have noticed.

Rilee Rickets said the course has made her think “there’s always something behind” issues that arise and opened her mind to other perspectives. She underscored that when Freeman began the class she advised them, “I’m not going to teach you what to think; I’m going to teach you how to think,” and adds, “She’s really done that.”

Craig Lunn, director of Dual Enrollment at Bethel, points to the benefits of dual enrollment, which at Bethel, is discounted for Weakley County students, “We are fortunate to have our local schools in Weakley County that support these students to grow as young people by allowing them to participate. Additionally, we want those students to realize they don’t have to go far away from home to get a quality education. They are already Bethel students because they are our dual enrollment students. The transition to become full-time, Bethel students is an easy one.