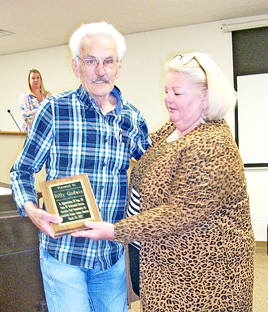 GREENFIELD (April 12) — The Greenfield City Board approved a garbage bid, as well as the first reading of the 2022-2023 FY budget, during its April 12 meeting. The board also heard department reports and announcements.  Additionally, board members discussed a proposed Beer Ordinance and a Liquor Referendum. (See separate story, “Greenfield Board Tables Revised Beer Ordinance, Liquor Referendum.)

Representatives from two solid waste service companies addressed the board and answered questions relating to their contract proposals for residential and commercial garbage pickup and removal for the City of Greenfield.

When Alderman Morris asked about bulk pickup, Tommy Leggins, chief operating officer for RaeKar, said, “We are interested in bulk and brush pickup.” However, since this service was not mentioned in the city’s bid specifications, it was not included in his company’s bid.

Attorney Pemberton stated this service can be negotiated.

Dawn Cole with Waste Management, which is the city’s current solid waste service provider, stated it was a corporate decision not to offer bulk and brush pickup services. She explained, due to the labor shortage, her company had to evaluate what services are most necessary to provide to the residents in the various cities, and Waste Management decided it could not provide bulk and yard waste pickup or recycling.

Leggins stated, if his company wins the garbage contract bid, it would be willing to negotiate a price for bulk pickup.

Mayor McAdams stated RaeKar’s bid would cost approximately $12.50 per single cart, plus $5.50 per cart for bulk pickup (once per month), which amounts to a total cost of $18. Waste management is $19.25, and does not include bulk pickup.

Attorney Pemberton stated the city will need to negotiate the length of the contract. The current contract is for five years.

A motion was made to accept the bid from RaeKar, which passed 8-0.

The board unanimously approved the 2022-2023 fiscal year budget on first reading without any discussion.

At the end of the current fiscal year, the governing body estimates balances as follows:

The projected revenues in the Drug Control Fund total $3,060 and expenditures amount to $1,000. The beginning cash balance is estimated at $28,060 and ending cash balance amounts to $30,120.

In the Solid Waste/Sanitation Fund, total cash receipts are projected to be $175,250 and total appropriations are estimated to be $161,000.

Attorney Pemberton stated a quitclaim deed for the Webster property has been drafted and signed by the mayor and city recorder and will be conveyed to the Webster family, as agreed to by the board.

The property in question is a 14 ft. wide strip of property city-owned parcel located between 309 and 311 Evergreen Street owned by Darryl Webster, who wishes to join his two lots together.

According to City Attorney Beau Pemberton, “The 14 ft. strip of property we’re dealing with here is part of a conveyance the city acquired in 1960.” He noted the adjacent property has been subdivided over the past 62 years and that’s why it has never been used for any city purposes. Pemberton explained, although the city-owned strip of land has a gravel driveway, it’s never been declared a city street.

During their March meeting, the board voted unanimously to grant Webster a quitclaim to the property, as requested.

Fire Chief Bob Dudley stated he has been working with FEMA to procure federal funds for the purpose of purchasing an emergency generator for the city. He stated it takes six to eight weeks for the delivery of a generator once it is ordered.

Additionally, Chief Dudley said he will present a firetruck proposal and next month’s meeting. “We talked about this during budget discussions,” Chief Dudley said. “It’s 24 months to get an apparatus. I’m going to come back with a plan to replace a 1990 model, which we can’t get parts for. It’s 32 years old and it’s time to replace it. We have about $100,000 and we’ll have another $100,000 to $125,000 by the time the truck gets here.”

“We’re getting ready for the fire prevention Festival; I got some of that done today,” Chief Dudley said.”

Public Works Director Robert Rodriguez stated, due to a problem with dirt continuously stopping up a culvert, it will have to be removed, cleaned out and relocated in such a way that it does not flood a local citizen’s yard. He noted a broken culvert at another location was replaced, and flooding has not reoccurred since.

Mayor reminded the board Parks and Recreation Director Kirk McCartney is retiring July 1. She announced the new director is Chris Fulcher.

Mayor McAdams presented Billy C. Godwin, 83, with a plaque of appreciation for serving as director of the Greenfield Senior Citizens’ Center for the past 20 years. Mr. Godwin said, “I hate to leave, but health problems are forcing me to retire. I love working. I love the people I’m around.” Although he is no longer able to serve as director, Godwin stated he will still be seeing his friends at the center. The crowd showed their appreciation for his service and dedication to the community by giving him a resounding applause.

Interim Senior Citizens’ Center Director Elizabeth Angela Hall, who has agreed to fill the post until July 1, said, “I’m new to Greenfield. I’ve been here 18 months.” Hall stated she was an educator and her specialty is organization and getting things done. She stated local seniors are very bright and seeks to get them more involved in the community.

Mayor McAdams announced the city has some COVID relief funding left over. With the board’s approval, and after talking with business owners from 206 to 218 North Front Street, she proposed removing the old sidewalk and pouring a new one from Wimpy’s Corner restaurant to the old Greenfield Bank, which is 4 in. thick, 20 ft. wide, 150-feet long, and ADA accessible. The mayor stated the bid proposal calls for removing and disposing of the metal awning along the sidewalk, with the exception of Wimpy’s Corner, which is going to be supported. The single bid received was from Randal Yates in the amount of $27,500. Mayor McAdams stated the project must be completed before the end of the current fiscal year. The board approved the bid by unanimous vote.

Pemberton also mentioned the tax sale for 2019 delinquent property is scheduled for April 28th, and is being conducted online out of the Weakley County Clerk and Master’s office of the Chancery Court. Pemberton announced those who have not paid their property taxes will have their property sold at auction to the highest bidder.

The mayor announced her intention to cease live streaming of Greenfield board meetings, now that COVID has apparently subsided.

Pope said he doesn’t want the city to pass things without the citizens knowing about it, and taking the meetings offline would be a step backwards. He insisted the matter be resolved by a vote of the board, before cancelling live streaming. “I feel like we’d be doing a disservice to the people by doing that,” Pope said. “We’re not up here to hide.”

Alderman Allen said, “I like the streaming. There are a lot of people that I know of that keep up with this at home. I don’t like the idea of not doing something, just because nobody else does it.”

After hearing from aldermen Pope and Allen, the mayor agreed to continue keeping the meetings open to the public via the internet. The meetings may be viewed on the City of Greenfield’s Facebook page.

Gibson suggested placing citizens input at the end of the agenda, so the people would be able to speak to anything discussed during the meeting. Mayor McAdams stated order of the agenda is in the city charter and cannot be changed without amending it.

Mayor McAdams stated Yard of the Month is May through October, and encouraged everyone to make their yard look nice.