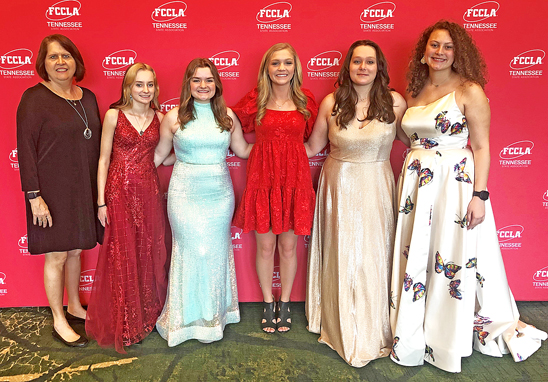 Dresden High School FCCLA Adviser Pat Phillips is with (from left to right) Anasy Lochala, Madison Taylor, LeeAnne Morefield, Lauren Jones, and Abigail Rother at the FCCLA State Leadership Meeting held in mid-March in Gatlinburg. The students attended leadership sessions, served as voting delegates, and competed in events where they earned two first place recognitions and the chance to advance to the nationals in California. 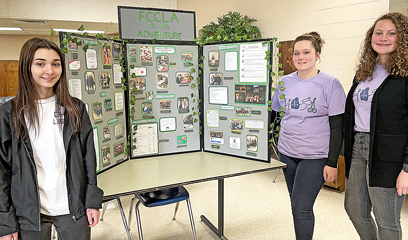 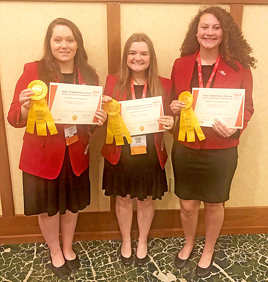 Madison Taylor, Lauren Jones, and Abigail Rother competed in Chapter in Review, Display and won 1st place gold. Their presentation was FCCLA on an Adventure. Rother stepped in for a sick Autumn Brackett (not shown).

LeeAnne Morefield competed in Professional Presentation and won 1st place at the state FCCLA convention in Gatlinburg. Her presentation was The Effects of Covid Live!

Family, Career and Community Leaders of America (FCCLA) are encouraged to hone skills in presenting, reporting, and serving to meet community needs. Dresden High School’s FCCLA did that and more as they overcame health setbacks, rallied as a team, and brought home two first place recognitions that earned them spots in the national competition in California later this summer.

The March 2022 state convention in Gatlinburg was the first time in two years – since the onset of the pandemic – for members of the Career and Technical Education organization across the state to gather in person. FCCLA focuses on Human Services, Hospitality and Tourism, Education and Training, and Visual Arts and Design. At the convention, members attend leadership session, vote on delegates, and compete in STAR (Students Taking Action for Recognition) events in more than 40 categories including fashion and interior design, childcare, chapter service portfolio, culinary and teacher training.

More than 500 were in attendance.

“They compete against the best of the best” said Phillips of the event.

Autumn Brackett had planned to be a part of the team to present their Chapter in Review Display. However, a sudden fever kept her at home. With little time to fill in the gap, Rother stepped in to replace Brackett. Their look at “FCCLA on an Adventure” included photos and memorabilia from individual projects and activities, community service, public relations efforts, and membership campaigns, meetings, and recognitions activities. The team had to provide the commentary.

“I did it two times – once for the group and once in front of the judges,” explained Rother of the team effort that netted one of two first place recognitions. She says she is now ready to do the work to get her own spot on the team next year.

“It was a great experience. I actually know what I’m doing now for the next time I’m competing. I’m not good a public speaking, but this was such a great experience, and I did so well that I’m proud of myself,” she said.

Though she was unable to participate at the state level, Brackett celebrated the achievement.

“I put a lot of hard work and even though I didn’t get to present it, I’m still proud that we won,” she shared.

“I take a college public speaking class, but I do it in front of my classmates,” she explained. “That was the most high-profile place I’ve done it in front of people, and I saw it work out in the end. Even though we were nervous, as soon as we walked in the room, we were in the zone.”

Morefield brought home the other first place title as she claimed the prize in Professional Presentation. She offered a look at “The Effects of Covid Live!” Assuming the role of a news anchor, she reported on her surveys of fellow Dresden students as to their reactions to the COVID crisis. Those findings included that 65% of her respondents indicated the pandemic “made me lose motivation” and “affected my eating habits.” She also shared that after presenting information to classes regarding the effects of COVID, 85% indicated they “learned healthy coping mechanisms” from her work.

Her seven minutes in front of the judges represented six weeks of preparation and presentations within the school. She reports that she values the experience.

“The new people I’ve met and getting to put myself out there a little more grows my confidence and how much I can talk in front of people and give presentations,” she noted of the experience that further solidified her desire to pursue a career as an on-air news reporter.

Morefield and Taylor last competed at the state convention when they were freshmen and advanced to the national level in Anaheim, California. While the Dresden team secured spots nationally again this year, the costs of travel prohibit their going to San Diego in 2022.