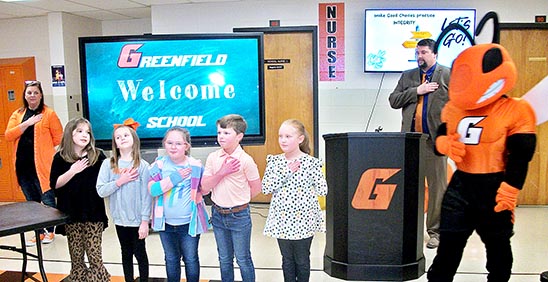 Greenfield second-grade teacher, Kimberly Laws, along with second-grade students who are children of teachers, joined with Principal Jeff Cupples, and Greenfield Yellowjackets mascot “Jammer,” in leading those in attendance at Thursday night’s School Board meeting in reciting the Pledge of Allegiance.

GREENFIELD (April 7) — During the regular monthly meeting of the Weakley County School Board on Thursday, April 7, members heard from school officials concerning programs focusing on young children and their families, as well as children with speech and language impairments. Several amendments to school board policies including, student dress code, non-resident students and student transfers were also on the agenda.

As the meeting opened Principal Jeff Cupples welcomed everyone and mentioned this is the first time the School Board has been able to meet in person in many months, due to COVID concerns.

Week of the Young Child

Weakley County Special Education Director Deborah Perkins said, “We’re continuing that tradition today. This week is the 51st annual week of the young child. We have come a long way in the field of childhood education since 1971.

“We have always said that the early years matter in the education of a child,” Perkins said. “We have a lot of research and science that can back that up.” She stated this can be seen in the classrooms of Weakley County Schools.

“This week, we do a lot of different things to celebrate the week of the young child,” Perkins said. “There is a different focus each day. On Friday, we’ll be focusing on our families.

“Just to show you that our young learners are paying attention, one of our four-year-olds, this morning, at Dresden Elementary, (observed) Weakley County Mayor Jake Bynum signing a proclamation officially proclaiming that this is the Week of the Young Child in Weakley County. He explained what the proclamation looked like and how it was used, and a child created her own proclamation using a gold marker and pen.”

Perkins said the “P” in the acronym P.A.U.S.E. stands for Pay attention to how much time your child has been in front of the screen. The letter “A” represents Assess if your child is meeting developmental milestones. The “U” stands for Utilize the team of professionals, the health Department, schoolteachers and specialists for help. The letter “S” stands for Smartphones and tablets for learning activities parents and children can do together. And the letter “E” refers to Engage and play that promotes conversation.

Perkins said, “In my role as special education director, we encounter children from ages three through 22. One thing that has been concerning to me the past year or so is that we have an increasing number of children who have communication needs regarding speech and language impairments. Four years ago, we had 11 children that could be considered non-verbal, which means they don’t speak. Today we have 30 children who are considered nonverbal and are using communication devices.”

“Throughout the year, we are going to have online resources available for our parents who have children with speech and language requirements,” Perkins said. “We are also going to have some bookmarks and other things we are going to be sharing throughout the community, like making brochures and those types of things.” Mrs. Perkins stated it is hoped that the initiative will have a positive impact on young children.

A revision of the student dress code, to allow students to wear garments with a hood was approved, as amended, on second and final reading, by a vote of 6-3, with School Board members Steve Vantrease, Martin Hamlin, Jeff Floyd, Wendell Cates, John Hatler and Gath Meeks voting “yes;” and Josh Moore, Beau Atkins and Doug Sims being absent.

This applies to sweaters, spirit wear, jackets or coats. However, the revised policy stipulates that the hood may not be worn inside of the school building. Additionally, the regulation requiring students to wear solid color clothing remains unchanged.

A school board policy involving non-residents was amended to state that non-resident students must submit their applications during the open enrollment period scheduled by the school system.

During a two-week period, beginning the Monday after Spring Break, the Weakley County School Department will post the schools and number of spaces available for enrollment on its website.

If a student lives outside the school system and is approved for enrollment, parents will be responsible for providing transportation to and from that respective school.

The policy also requires the student to maintain satisfactory attendance, behavior and effort to continue enrollment in the school system.

Additionally, the policy states a non-resident student seeking to transfer on the basis of being the child of a Weakley County school teacher may be admitted prior to the consideration of all other transfer applications with district residents.

Furthermore, the revised policy notes that the non-resident student who was enrolled in a school during the previous school year may not be denied enrollment in the school for the coming school year, providing the student continues to maintain satisfactory attendance, behavior and effort.

A school board policy involving student assignment states, “Students are expected to attend the schools to which they are assigned by virtue of their residence. Students will enroll in the school of their appropriate grade level nearest their residence.”

However, parents may elect to enroll their children in any school in the school system, with the condition that they provide transportation to and from their child’s respective school, and it does not cause overcrowding at the school.

A revised School Board policy states that students wishing to transfer from one Weakley County School to another, for the upcoming school year, must make the request to transfer during the open enrollment period.

There is no longer a requirement for transfer requests to be made to their school’s principal, prior to April 15th. It eliminates a section of the policy that reads, “Any request for transfer must be discussed between the principals involved and may necessitate discussions with the director of schools.”

The revised policy reads, “All transfers will be approved or denied in accordance with Tennessee state law.”

The board approved a General Purpose School Fund resolution transferring $3,396,176 out of the unassigned fund balance and placing it in a line item for building improvements. According to Director of Weakley County Schools Randy Frazier, the monies will be used to fund capital project expenditures for HVAC improvements to various Weakley County Schools. Other planned improvements include the gym and locker rooms at Westview, the commons area and classrooms at Dresden Middle School, and all middle school classrooms, this summer. “By paying up front, we saved $160,000,” Mr. Frazier said.

A resolution authorizing budget amendments to the School Federal Projects Fund the fiscal year ending May 31, 2022, was approved. The Federal Project Fund involves only federal monies and no local tax dollars.

The Elementary and Secondary School Emergency Relief fund was created by the federal American Rescue Plan Act of 2021 and provides funding to safely reopen and sustain the safe operation of schools and address the impact of the coronavirus pandemic on the nation’s students. The expenditure of these funds must be in compliance with federal law.

“We’re updating teacher workrooms, teacher lounges and office areas, and purchasing a lot of equipment and supplies,” Mr. Frazier said. “We’ll have bids going out, hopefully in a week or so.”

He noted Henson Construction is the project manager for these projects.

He stated directional philosophies include: all students can learn; learning takes place in a nurturing environment; and collaboration increases student achievement.

Cupples listed improvements in academics at Greenfield School as follows: a 100-percent graduation rate; the After School Program; level 5 growth on ACT composite; hosting the first annual March Mathness Tournament; adding opportunities in Honors, AP, and CLEP courses; seniors can graduate with 30 plus hours of college credit; library’s AR program had seven, one-million plus word readers; as of Wednesday, April 6, Greenfield School had the top algebra II student in Northwest Tennessee and 3rd best in statistics; and the school offers students access to the STEM (Science, Technology, Engineering, and Math) Program – STEM I, STEM II and STEM III. It is important to note that STEM is a teaching philosophy that integrates all four disciplines together into a single, cross-disciplinary program which offers hands-on instruction in real-world (as opposed to purely academic) applications and teaching methods.

Frazier stated the Weakley County Special Education Department has been involved in conversations with schools officials for the past several months, regarding students enrolled in Comprehensive Development Classes. He said, “Our CDC population continues to grow, which is causing a strain on some of the logistics in our buildings; so, next year, we’re planning on moving our 7th and 8th grade CDC classes to Martin Middle School.”

Additionally, Frazier said, “We’re going to begin interviewing for prospective teachers. We have some outstanding candidates, and hopefully we’ll be hiring some of them for next year.”

School Board Chairman Steve Vantrease offered congratulations on behalf of the school board, to the Westview Chargers for winning the TSSAA State Championship. He also congratulated the Dresden Lady Lions and Lady Bulldogs for advancing to the TSSAA 1A State Tourney.