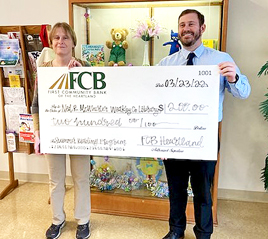 The First Community Bank of the Heartland presented the Ned Ray McWherter Weakley County Library with a donation for its upcoming summer reading program, “Oceans of Possibilities.” Pictured (L to R) is Children’s Librarian Sara Rachels receiving the donation from Brank Manager Josh Pirtle for $200. Summer Reading Program registration begins May 25 and runs through the end of June and is open to all ages, including teens and adults. Programs, supplies and prizes are purchased with all donated funds. A few confirmed programs this year are: Smokey Bear, Anna Clark story time with crafts, West TN PBS and Character Splash, Farm Bureau Women’s Terri Brundige presenting Oceans of Possibilities with Plants, Discovery Park’s Russell Orr and Oceans Beyond Earth, Josh Pirtle from FCB and Oceans of Possibilities in Banking for the teens, Mr. Bond the Science Guy, and Paris Landing State Park Birds of Prey. Several donations have been received from local businesses and the community. Donations can be mailed or brought to the library any weekday from 9 a.m. through 5 p.m. or on Saturdays from 9 a.m. until 2 p.m.