Members of the Dresden High School FFA organization recently attend the State FFA Convention in Gatlinburg. This year the Dresden FFA was honored to have one of its members to serve on the state Officer Nominating Committee. The nominating committee consists of six adult members and six student members. This committee evaluates the credentials and capabilities of the candidates based upon a number of elements including: an application submitted by each candidate; a knowledge exam; a letter writing exercise; a Leadership and FFA Interview; an Agriculture and Knowledge of State and Federal Issues Interview; and a Group Interview. “It was a privilege to have been selected to serve on this committee. Only two members were selected from West Tennessee, and I had the honor to be one of those. I saw firsthand the state officer selection process and worked alongside industry leaders to achieve one common goal: nominating the best slate of officers to serve our association,” Sam Laws noted. Attending the convention were (Top, L to R) Miller Moore, Austin Peevyhouse, Cayden Lowry, Tanner Floyd, Sam Laws, Wylie Ogg, Spencer Davis, Creed Melton, Hayden Schlicht; (Bottom, L to R) Jon Holden, Jessica Browning, Nate Tarver, Emma Harrison, Adrianne Todd, Amanda Perry, Merissa Harrison, Annika Jolley, Rebecca Frazier, Morgan Richards and Jason Kemp. 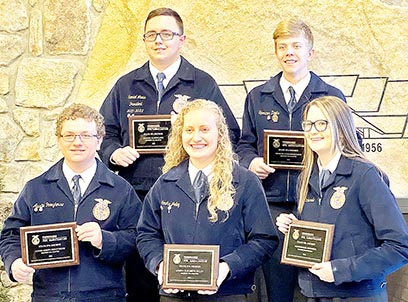 DRESDEN FFA STATE DEGREE RECIPENTS – Dresden FFA had five State Degree recipients this year. The state FFA Degree is the highest honor the state association can bestow upon its members. This degree required 300 hours of work in their supervised agriculture experience and five activities above the chapter level. Receiving State Degrees were (Top, L to R) Sam Laws and Spencer Davis; (Bottom, L to R) Austin Peevyhouse, Annika Jolley, and Morgan Richards. Also at this year’s leadership convention, the Dresden Chapter was awarded three Chapter awards for its accomplishments throughout the year. Those three awards included: State Superior Award, 10-Percent Increase in membership, and the Platinum PLOW (Passing Literacy OnWard). Receiving the PLOW Award for the chapter was Sam Laws. The 10-Percent Increase award was received by Austin Peevyhouse. And the Superior Chapter award was received by Spencer Davis 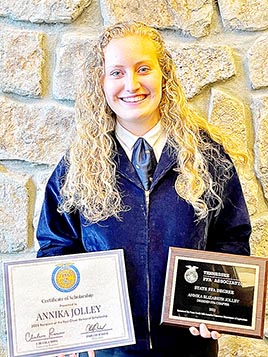 FOUNDATION SCHOLARSHIP – Dresden FFA’s Annika Jolley was selected to be a recipient of a TN FFA Foundation Scholarship. The TN FFA Foundation awards over 40 scholarships to graduating high school seniors. These scholarships are 100 percent donor funded. She was awarded the Paul Oliver Memorial Scholarship. “I would like to thank the Paul Oliver family for this amazing honor. I plan on attending the University of Tennessee at Martin to major in Pre-Veterinary Sciences to become a veterinarian. I plan on returning to Weakley County to invest my knowledge to assist the community,” Jolley said.