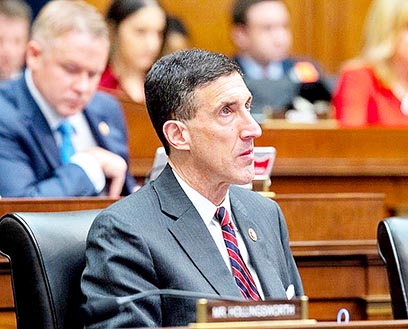 WASHINGTON, D.C. (March 31) – As members of Congress continued to spend last week assessing budget proposals in Washington, the fluid situation in the Ukraine with Russia, inflation and rising fuel costs remain on the forefront of many of their minds.

Tennessee District 8 Congressman David Kustoff recently shared his thoughts on the above-mentioned subjects and what impacts they have on people across the nation, particularly in his district. Kustoff, a Republican from Germantown, serves in the U.S. House of Representatives. His district is composed of the following Tennessee counties: Carroll, Crockett, Dyer, Fayette, Gibson, Haywood, Henry, Lake, Lauderdale, Madison, Obion, Tipton, Weakley, a portion of Shelby County (including the cities of Germantown, Bartlett and Collierville), and a piece of Benton County.

Kustoff explained the invasion of Ukraine by Russian President Vladimir Putin last month has led Congress to question who Putin is listening to and what they are saying to him.

“I am very proud of the Ukranian people who have stood up and fought during Putin’s invasion. Putin thought he could take over, but he underestimated Ukraine. More Russian troops have been killed than he probably thought would be. I think there have been six Russian generals and the toll on Russia is greater than he (Putin) thought,” Kustoff said. The United States and Europe imposed sanctions on Russian oligarchs and frozen their financial assets.

In the form of aid for Ukraine, the US Congress recently passed a security bill that gives $13.6 billion in aid to the country for security and non-security purposes. The House also banned U.S. imports of Russian oil and other energy as a result of the Russian invasion. Kustoff said the recent address by Ukrainian President Volodymyr Zelenskyy to Congress was very moving and contained photo slideshows of the country before and after the invasion.

“The photos showed parts of the capitol which were beautiful and thriving. Then we saw photos of parts of Ukraine after the invasion of people injured,” Kustoff said.

“One question we have to ask is who is Putin listening to and what are they telling him,” the congressman added. He added US. Intelligence is working to assess that information and report it back to Congress. If conflicts by Putin extend beyond the Ukrainian borders, then NATO will likely get involved, according to Kustoff.

When looking at rising inflation, along with gas prices, Kustoff said the problem started about 18 months ago. Kustoff explained when Donald Trump was president, inflation was low. Gas and energy prices are 40-50 higher under President Joe Biden’s term.

“The first thing Biden did when he became president was sign a series of executive orders and one was to stop further production of the Keystone pipeline. For the first time in about 50 years, under Trump, we were energy independent. Now, we are energy dependent again and relying on foreign producers, like Russia,” Kustoff explained. He added there is no one, easy, push-button answer to mitigate rising inflation. In February of this year, the Consumer Price Index rose by 7.5 percent. In turn, Congress is looking to the Federal Reserve, which raised interest rates approximately two weeks ago.

“We have got to curb government spending. Biden and Nancy Pelosi proposed a $1.9 trillion spending bill under the Rescue Plan. I voted against it. Not one Republican voted for it. You can print that money and push into the economy, but that creates inflationary pressure. I expect the Federal Reserve might raise interest rates six to eight times over the next 18 months. This is similar to the situation in this country during the late 70s and early 80s that put us into a recession. We have to get ahold of these massive spending bills,” Kustoff noted. He said the president has requested another $22 billion for COVID relief, but only nine percent of the $1.9 trillion passed actually went to COIVID relief.

“There was $500 billion that went to states. There were some that did not need the money. Our mayors, the comptroller’s office and our superintendents of schools have done well appropriating the money and keeping us (Tennessee) in better shape than others during the pandemic. For other states and cities, that money was likely a bail-out for blue cities and states that were not doing well before the pandemic,” Kustoff said.

In proposed legislation news, Kustoff, along with U.S. Representative Billy Long of Missouri, have introduced a Rural Broadband bill.

“We know in rural communities, there is very little access to broadband internet. This proposal will increase the number of internet exchanges. Exchanges are the building blocks for how the internet is built. With more content providers, this will increase speed and access to the internet for rural communities,” Kustoff explained. This would be done in the form of making grants available to internet providers for this purpose. The Internet Exchange Act of 2022 House bill is HR 7112. It has been referred to the House Energy and Commerce committee as of March 17, 2022.

Congressman Kustoff has offices in West Tennessee, including one in Jackson, Memphis and Martin.

To contact representatives of his office, call the following:

Editor’s note: Sabrina Bates is the Managing Editor of the Dresden Enterprise newspaper office covering Weakley County. The Enterprise is a division of the Magic Valley Publishing Co. family. She may be contacted by email at sabrina@magicvalleypublishing.com.