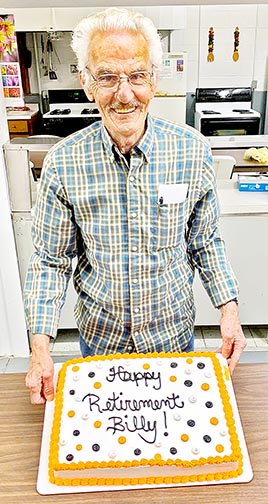 Billy Godwin has retired as Greenfield Senior Citizens Center Director, because of health problems, after holding the post for the past 20 years.

GREENFIELD (March 31) —Billy C. Godwin, 83, retired from his job as Greenfield Senior Citizens Center Director on March 31, after 20 years of service to the community.

A group of Godwin’s friends hosted a retirement reception at the center, complete with a cake and refreshments, in his honor.

Godwin states he is no longer able to perform the duties of the job, because of health issues.

“I hate to leave it, but I have a lot of problems with my legs and I had to get off of them, so I gave it up,” he explained.

“I really enjoyed it until the coronavirus hit. We had a potluck luncheon every month, and would play bingo once a month. We’re just now getting started back with our Bennett Bingo monthly.

“When I first started, there wasn’t anybody going there. I finally got it built back up, and I feel pretty good about that.

“I can remember years ago when there wasn’t any building, just a shelter. It wasn’t closed in or anything.

“When I was a kid growing up, it was just a shed. It was located at what used to be called the City Park, but now it’s called Veterans Park.”

Godwin said he organized trips for the seniors and other activities. “I had a lot of help from a fellow by the name of Frank Gibson. He helped me a lot.

“One of my favorite trips was going up to see the hummingbirds up in Kentucky.”

Godwin states he also enjoyed visiting Reelfoot Lake State Park, which is known for its variety of birds. Each year, the park hosts the Eagle Festival. White pelicans also make the park home during their annual fall migration.

Another interesting trip the group took was to Nashville, where they rode on the General Jackson Showboat.

“We would go up to Kentucky around Christmas time to see the Christmas shows,” Godwin recalled.

Other outings have included trips to the Grand Ole Opry in Nashville and the Kentucky Opry at the Mountain Arts Center in Prestonsburg, Kentucky.

He noted sometimes they will simply go out to a restaurant to eat.

“Of course, our people are getting older and they don’t want to get too far from home these days,” Godwin said.

He plans on staying involved at the Senior Center and enjoying time off with his family.

“I enjoyed being with the people, I’m sure going to miss them,” he added.

According to Frank Gibson, who is very active at the Greenfield Senior Citizens Center, a permanent replacement is being sought to fill the position left vacant by Godwin’s resignation.

In the meantime, Elizabeth Angela Hall has agreed to fill-in as interim director until July 1.

“Hall is from Florida and moved to Greenfield about three years ago,” City Recorder Callie Croom Smithson said. “She got involved in the Senior Center and said she would help out. She has a lot of great ideas and is trying to recruit more people to come.”

The job of director is a part-time paid position. It involves opening up the center and keeping it clean, getting activities together for the seniors to have throughout the day, as well as planning trips and events.

The center is open Monday through Friday from 8 a.m. until noon.

Some of the benefits of the Greenfield Senior Citizen Programs include:

The Senior Center’s operating budget is funded by The United Way.