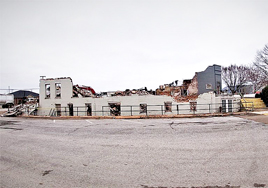 The Majestic House was demolished after an EF-3 tornado damaged the structure beyond repair on December 10, 2021.

DRESDEN (March 16) — The 114-year-old Majestic House building, a longtime Dresden landmark located across the street from the Weakley County Courthouse, was heavily damaged in the December 10, 2021, tornado, and was demolished on February 25, 2022.

The roof was blown off of the structure, which originally served as a hotel, and was later converted into a restaurant. The powerful tornadic winds also damaged the interior. A portion of the walls were still standing; however, because of the extensive damage, the building could not be repaired.

The powerful EF-3 tornado not only destroyed the former restaurant, but all of the municipal and commercial buildings on the entire city block, located on the south side of the court square. It also destroyed other Dresden homes and businesses in its path, as well as two downtown churches. 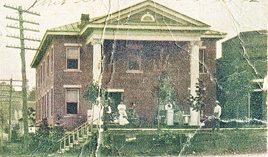 The New Century Hotel, a red-brick building, which was constructed in 1908 on the corner of East Main and South Wilson Street, across from the Weakley County Courthouse, was demolished after an EF-3 tornado damaged the structure beyond repair on December 10, 2021.

Dresden flourished at the dawn of the 20th Century. It was the predominant city in the county, the seat of government, located at its geographical heart. All roads led to Dresden at that time, including the railroad.

Dresden was a bustling community, during the early 1900s, with the downtown area being the focus of commerce.

Among the thriving businesses in those days, were three hotels located around the court square – the New Century Hotel, erected on the corner of East Main and South Wilson Street; the Cashion Hotel, located at the site of the current U.S. Post Office; and the Hampton House Hotel, built on the corner of East Main and Poplar streets, which is the lot where the old Weakley County Bank would later be built.

Some of the first hotel keepers welcoming guests to their establishments were Benjamin Bondurant, Robert Powell and Benjamin Barham. 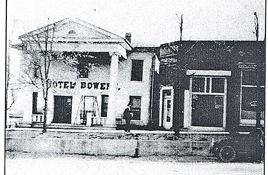 The New Century Hotel, later renamed the Bowers Hotel (as seen in 1918), was located on the south side of the court square in Dresden.

The New Century Hotel was later renamed the Bowers Hotel, and then, the Steele Hotel.

Prior to the construction of the 2,700 square foot New Century Hotel, the location is shown as a “boarding house” on the 1894 and 1899 Sanborn-Perris maps of downtown Dresden, Tennessee. (Google website: Sanborn Maps, Available Online, Dresden, Weakley County, Tennessee.)

The historic New Century Hotel building stood for several generations, beginning in the horse and buggy days and continuing to the present. During this time, it served as a hotel, and later, as a restaurant. The building changed ownership and names multiple times over the years.

The hotel, which was originally a red-brick structure, was later painted white. The front steps were made of wood and replaced with concrete years later.

The hotel was known for a wedding site, and the bridal suite was used by many honeymooners.

A taxi met the train five times a day to bring people to the hotel.

There were shade trees all around the hotel and chairs stayed on the front porch, making it a pleasant place for people to stop and visit.

W.D. Brasfield and wife, Kate V. Brasfield, who owned the property at the dawn of the 20th Century, sold the lot to J.P. Taylor and wife, Linenia Taylor, on December 22, 1906. Taylor erected the New Century Hotel on the property in 1908.

The Steele family operated the hotel for 54 years with father, E.D. Steele, and from 1935 with son, Charles P. Steele. In September 24, 1935, Charles P. Steele purchased the business and the name was changed from the Bowers Hotel to the Steele Hotel. On March 10, 1970, Charles deeded the property to his wife, Ruth.

Mrs. Charlene Steele Carroll, 77, of Dresden recalls growing up in the hotel, which was operated by her parents, Charles “Charlie” P. Steele and Ruth Steele. “My granddaddy owned it and my daddy bought it and ran it,” she said.

“I was born and raised in the hotel and slept in the same bed for 22 years, until I married,” Mrs. Carroll said. She noted her future husband, Kim B. Carroll, often came to visit her at the hotel.

Mrs. Carroll stated her family resided in half of the hotel’s main floor, which included a kitchen, living room, dining room and bedrooms. Rental rooms occupied the entire upstairs area.

Mrs. Carroll stated her mother and father continued to live in the hotel for several years after the hotel’s regular boarders left. During that time, the rooms were occupied mostly by travelers stopping off in Dresden. “They had a particular room they stayed in while in town. They would go behind the desk, get the key and go to their room,” she recalled.

“I was four years old, when my daddy had a severe, paralyzing stroke at the age of 42. He was in a wheelchair the rest of his life, and lived to be 83. So, mother, my sister and I had to help.”

Mrs. Carroll recalled a comical event that occurred during the time her family owned the hotel. She stated M.R. (Red) Cannaday came to Dresden as a young boy and lived at the Steele Hotel. One night, Red, who loved animals, fired-up the potbelly stove in the lobby, opened all of the doors, and let all of the dogs in the neighborhood inside to warm. When the dogs decided to fight for the best spot to rest, Mr. Steele came roaring down the stairs in his nightshirt to see what was going on. Needless to say, that put an end to Red inviting his animal friends into the lobby.

Another interesting story about the hotel is told by General Sessions Judge Tommy Moore. According to Judge Moore, the parents of Dale Morris and his older brother, Ned Morris, were planning to move from Dresden to Chicago, Illinois. However, Dale was still attending Dresden High School at the time and wanted to stay behind until he graduated. So, his parents allowed him to reside at the Steele Hotel, until he finished school a couple of years later.

“I’ve always thought it was interesting that the town was safe enough that his parents could (leave their son behind). The high school was just a couple of blocks down the street; and I’m sure people checked on him, including the Steele family.”

Many notable dignitaries stayed at the hotel over the years.

Mrs. Carroll said. “I got to meet so many nice people.” She noted Judge Finis James Garrett (1875-1956) and his wife, Elizabeth “Bess” Burns Garrett, used to come and stay at the hotel. “Mrs. Garrett painted a collie in the snow, framed it, and gave it to me when I was small,” Mrs. Carroll said.

Judge Garrett was one of the hotel’s most prominent guests. He was born and raised in nearby Ore Springs in Weakley County. In 1900, he was named Weakley County Clerk and Master of Chancery Court. Finis Garrett passed the Bar examination in 1899, and operated a private law practice in Dresden, from 1900 to 1905. Additionally, he served as a schoolteacher; and at the age of 18, he was briefly editor of the Dresden Enterprise newspaper. Finis Garrett rose to national prominence when he was elected a member of the U.S. Congress and served in that post for 24 years (1905-1929). Additionally, he was appointed Associate Judge U.S. Court of Customs and in Patent Appeals in 1929, after being nominated to the post by President Calvin Coolidge. He was appointed Chief Justice of Customs Appeals Court in 1937, after being nominated by President Franklin D. Roosevelt, a position he retained until his retirement in 1955 at age 80. In recognition of his many years of service, Judge Garrett was honored by having Garrett Lake named after him.

In addition to boarders, the hotel was frequented by local citizens, who enjoyed the family-style meals provided by the hotel’s kitchen at a very reasonable price.

In a Facebook post, Jim Perry, a former executive vice president of the Weakley County Chamber of Commerce, said, “I used to go there after church on Sundays, and eat lunch with my mother. Everyone sat together at a long table. This was maybe in the early 1950s, when it was the Bowers Hotel. The cost of lunch per person was 50 cents, and that was family-style, all you could eat. We would enter through the rear entrance nearest the old Gulf Service Station owned by Harold Brooks in those days,” Perry said. 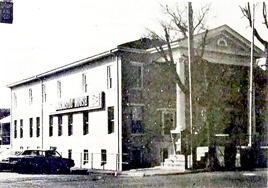 The Majestic House Restaurant, which was located on the southeast side of the court square, is pictured in this photograph taken on February 16, 1984.

The New Century Hotel operated under different names over the decades, until it finally closed its doors and remained unoccupied since 1979. In 1983 it reopened as a restaurant.

On April 7, 1987, the restaurant was purchased by Spiro Halkias and Gus Halkias, who were partners operating the Majestic Pizza and Steak House. The partners also operated a restaurant in Murray, Kentucky.

The restaurant served Grecian-style cuisine that focused mainly on steak and pizza dinners.

On August 21, 2003, the Majestic Pizza and Steak House property was purchased by Tony E. Winstead and wife, Inju Winstead, who still own the property.

Mrs. Carroll stated, after the former hotel was converted to a restaurant, her family ate there from time-to-time. She stated some of the walls of the rooms inside the hotel were removed to open up space for the restaurant. On one occasion, she and her mother brought her father to the restaurant in his wheelchair and they ate in the area that was once her bedroom.

Judge Tommy Moore states he ate at the restaurant every week.

Weakley County Trustee Marci Floyd recalls eating pizza at the restaurant when she was a child.

Diana Clark, who also works at the Weakley County Trustee’s Office, stated she ate at the restaurant several times, including during a wedding recital dinner.

Mrs. Carroll stated, after the tornado hit the former hotel, the two wooden columns supporting the front porch entrance were toppled. They were found laying side-by-side, but were undamaged. Despite their age, the stoutly built columns, which were constructed of numerous small strips of wood, didn’t break or crack when they fell.

The Majestic House was demolished after an EF-3 tornado damaged the structure beyond repair on December 10, 2021.

After the restaurant ceased operations, the building was utilized for various purposes over the years, under the ownership of Tony and Inju Winstead. In 2004, the former restaurant housed Majestic Adventures, which offered a scuba diving class. The structure also served as a storage facility.

Mr. Winstead said, now that it is just a bare lot, he has not yet made a decision concerning what he is going to do with the property. Winstead stated he may build a law office for his daughter, Tiana, who is an attorney.

U.S. Marine First Lieutenant Tiana Winstead, who is stationed in Hawaii, said she earned her law degree at the University of Hawaii in 2019, and plans on opening a law office in Dresden, once she completes her military obligation in the Marine Corps. Tiana is a criminal defense attorney specializing in international law.

“I plan on opening a law firm for in-house counseling for business,” Tiana said.

According to Tiana, “Before the Majestic was destroyed by the tornado, we were working with the State Historical Society to preserve it.”