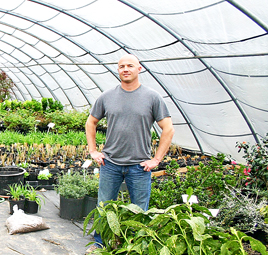 Derek Doster and his wife, Jamie, are co-owners of the family’s rental and landscaping businesses. 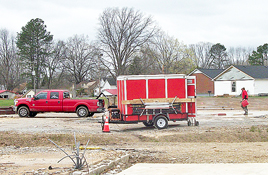 DRESDEN (March 24) — Several of the many businesses destroyed or damaged beyond repair by the EF-3 tornado that barreled through Dresden on December 10, 2021, are in the process of being rebuilt.

When he first saw the lot where his storage buildings were located after the storm, Doster said, “It looked like a bomb had exploded.”

He has decided to rebuild at the same location, and has already hired a contractor to erect a new structure containing 27 storage units, which is the same number of units contained in the original structure.

Doster states the materials have already been delivered to the worksite and the contractor began constructing the new storage units on Thursday, March 24.

“The storage units that were destroyed by the tornado were wood-framed, and I am replacing them with metal-framed structures, which will be a lot stronger and better built,” Doster said. “They are going to look great.”

“The contractor is Billy Williams from Arco Building Supplies out of Georgia. I expect he will have the storage units completed within 10 to 14 days.”

Derek anticipates the storage units, which were originally built in 2015, will fill back up rather quickly, as soon as they are completed.

The contractor is also going to help Derek rebuild Bryant Tire and Alignment, located at 347 Pikeview St. (at the intersection of Pikeview and Morrow Street), which he also owns.

In addition to his storage business, Doster began renting homes around Dresden and other towns in 2008.

Derek and his wife, Jamie, also own and operate Doster Lawn & Landscaping, based in Dresden, which has been providing lawn care for its customers for well over 30 years. In economic times, both good and bad, the family-operated business has not only managed to survive, but thrive.

“The tornado caused us to be delayed in beginning landscaping operations this year,” Doster said. “Our equipment has been repaired, but we are still waiting for our trucks to be fixed. We are hard at it now and doing the best we can to get caught up.

“Our snowplows were damaged, and I was close to calling up my snowplow customers and telling them I couldn’t push anything, due to the damage we had. But we managed to put things together and make things happen. Fortunately, we didn’t have any big snows like we normally do. This year, we saw one segment of the area we cover hit. We had that happen two or three times, so we were able to take care of the demand with only one truck. In other years, we would have been really behind.

“We had home remodeling tools that were destroyed, lost or blown away. We had to replace or repair those tools. Oftentimes, we didn’t know a tool was missing, until we got on the job and needed it. Then, we would have to go out and purchase another one.”

Some of his big equipment was severely damaged, including a bark-blower, which has not yet been repaired. “We’ve had trouble getting parts, due to delays in the supply chain,” Doster said. “I have some parts on backorder and don’t know when they’ll be delivered. This includes tools such as plate compactors, sod-cutters, bed-edgers, and a lot of odds and ends tools that were damaged.”

However, Doster states his greenhouse was not impacted by the storm.

Doster said his home only suffered minor damaged during the tornado. He noted some of the shingles were blown off the house. Also, the high winds picked up a trampoline and hurled it through the air. A steel rod on the trampoline penetrated the second-story wall of his home, piercing a shower unit.

“We were lucky we didn’t get any more damage to our house,” Doster said. “But, our business really took a big hit and slowed things down.”

Derek says he has about 10 rental properties in Dresden, and some of them were damaged by the tornado. He noted the roofs were blown off of homes at 229 East Main St. and 318 Pikeview St. He states some of the buildings can be repaired, but others will have to be demolished. The Dosters also own properties in McKenzie, Martin and Union City, but they were not damaged by the tornado.

Doster stated the debris from all of his rental properties has been pushed out to the road to be picked up and hauled away. “That’s been our project this winter, to get everything cleaned up.”

According to Doster, his properties were insured, but due to inflation, there has been an increase in property values, causing him to be under-insured. To make up for the difference, he is getting a low-interest loan from the Small Business Association to repair his storage business and other rental properties.

Derek recalled the events that transpired shortly before the storm came through the area, saying, “We were watching the news on Channel 6 the night of the storm and saw that Mayfield was going to get hammered. The announcer talked about lives being changed in an instant.” Derek stated he wept after seeing the devastation caused by the powerful tornado. “I knew people were getting hurt. So, I got in touch with my landscape crew and told them I was going to Mayfield tomorrow. I asked them if I had any volunteers to help the folks in Mayfield. I had them rounded up, but in about an hour, we were getting hit by the tornado and I realized it was my life that was getting changed.”

Derek stated he and his family were fine, and there were no serious injuries or loss of life in Dresden.

“It’s a struggle, but it makes us better and makes us stronger,” Doster said.

While Derek operates the greenhouse and rental business, his wife, Jamie Grooms Doster, serves as assistant vice principal at Greenfield School. The couple, along with their two children, Drew, age 3 1/2, and Katie, age 10 ½; reside on Clifton Street in Dresden, which is located next to the family’s greenhouse.