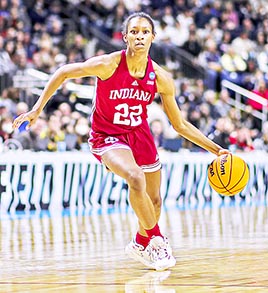 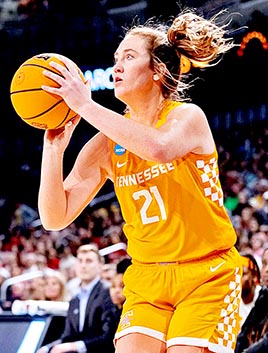 For a pair of Greenfield women, Sweet 16 isn’t about candles on a cake, poodle skirts or saddle shoes. For them, the expression has taken on a whole different meaning.

Tess Darby, a 6-1 guard/forward for the Tennessee Lady Vols, and Chloe Moore-McNeil, a 5-11 guard for the Indiana Hoosiers, have stepped onto one of the biggest stages in collegiate athletics: the NCAA women’s basketball tournament Sweet 16.

Darby and McNeil are both sophomores for their respective schools and have had productive seasons.

It’s kind of hard to imagine how competitors from the small town of Greenfield could navigate their way into the national spotlight, but anyone who saw them play won’t be surprised.

Darby and McNeil led Greenfield to the girls’ Class A state championship in 2018 and to a 34-0 mark in 2020. In between, they managed a visit to the state tournament in 2019. The 2020 team likely would have won another gold ball had COVID-19 not reared its ugly head and halted the state tournament after the quarterfinals.

The Lady Vols, 24-9, were a 4 seed in the tournament, having squeaked by Belmont in the second round.  They faced top-seeded Louisville in Wichita, Kansas, in their Sweet 16 battle. Louisville eliminated Tennessee 76-64 Saturday. Darby hit three triples in the second half and finished with nine points and four rebounds.

Indiana, 25-9, was a 3 seed and faced perennial women’s powerhouse Connecticut in Bridgeport, Connecticut. The Hoosiers edged past Princeton in the second round. Connecticut defeated Indiana 75-58. Moore-McNeil played 20 minutes and recorded one assist against the Huskies.

Darby is averaging 5.2 points per game for Tennessee and had a career-high 17 points against Mississippi State on February 24. She reached double digits six times this season and appeared in 22 games, averaging 23 minutes per game.

McNeil is averaging 5.4 points per game and has reached double figures seven times. She attained her season high of 11 points four times this season (Purdue on February 9, Iowa on February 19 and February 22 and Ohio State on March 5 in the Big 10 semifinals). She appeared in 30 games for the Hoosiers. Indiana, seeded fifth, lost in the Big 10 title game.

Someone who is quite familiar with both players is UT Martin women’s assistant coach Willie Trevathan, who was their coach at Greenfield. He expected big things from them when they signed with major Division 1 programs.

“I’m not surprised at all (about their success),” he said. “When they signed, there were skeptics, but they didn’t see the intangibles I saw every day, what kind of character they had. I’d been around both of them since they were 5-6 years old, so I know how hard they worked. They were great competitors and talented. They had everything they needed to be successful.”

Trevathan said Darby may be the best shooter in the Southeastern Conference and, as a result, forces teams to extend their defenses to account for her. Moore-McNeil, the coach said, is a playmaker who is a threat inside as well as the perimeter.

Trevathan said it’s a real treat to see his prodigies go to work on the SEC or Big 10 Networks.

“It’s rare and exciting that on any given night, to turn on the TV and watch your former players, ” he said. “It’s always exciting to see them play on that big stage.”

McNeil was a two-time Miss Basketball winner (2019-20). She scored 2,598 points for the Lady Yellowjackets.

Darby was two-time Miss Basketball finalist and a four-time all-state honoree by the Tennessee Sports Writers Association. She was a McDonald’s All-American nominee. She finished with 2,604 points for Greenfield.

“When you have kids like that on your team, it makes you look like you know what you are doing,” Trevathan said. “Their class won more games than any class that’s been through here. Sometimes coaches get too much credit and blame, but I can’t take credit for what those two did while they were here.”