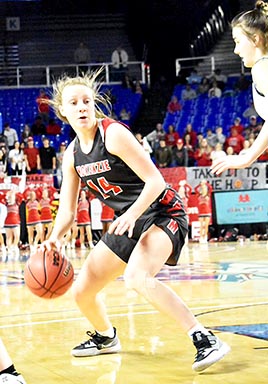 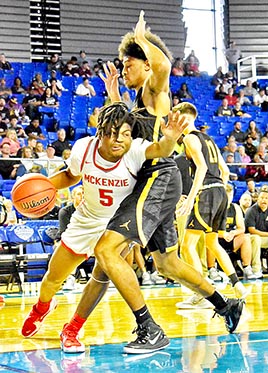 SHOOTING FOR STATE – McKenzie Rebel Zay Webber drives the baseline during the team’s match up against Trenton Peabody as both teams raced for the TSSAA Class 1A basketball state finals last week in Murfreesboro. Photo courtesy of Carol Nanney.

MURFREESBORO – It was quite the year for McKenzie High School basketball.

For the first time in school history, McKenzie sent both boys’ and girls’ teams to the state tournament.  The Lady Rebels captured the Class A state title by defeating Wayne County 46-42 in the state championship Saturday, March 12.

The Lady Rebels defeated North Greene and Gleason to reach the finals.

Meanwhile, the McKenzie boys secured a place setting in the Class A boys’ state tournament in Murfreesboro last week. The Rebels put up a tough fight, but Trenton Peabody proved to be too tall and athletic. The Golden Tide prevailed in the quarterfinals 63-48.

Both Lady Rebel and Rebel teams had the unique distinction of claiming both District 11A and Region 6A championships. Both teams also hosted substate games.

Making this season even more unique was the fact that John Wilkins coached teams to those lofty plateaus this season.

Both McKenzie teams should return as favorites to get back to the Glass House next season. Both teams only lose one senior, Dani Dyer from the girls’ team, Zayden McCaslin on the boys.

The McKenzie girls finished 31-2, while the Rebels ended with a 21-8 worksheet.