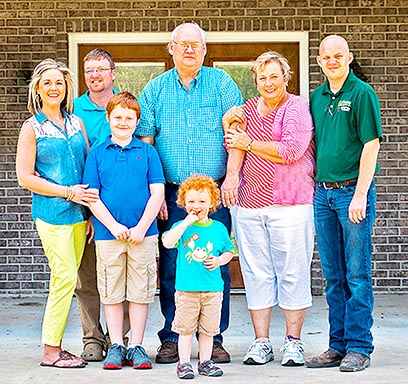 Under Jimmy’s leadership, Tosh Farms has continued to grow and thrive. It consists of 18,000 acres of farmed land, 10 sow farms that produce more than 930,000 market hogs each year, more than 450 employees and more than 85 contract growing partners.

Tosh Farms, located in Henry, Tennessee, contributes to the regional economy and employs a fleet of approximately 450 people, ranging from farmers to tractor-trailer drivers. 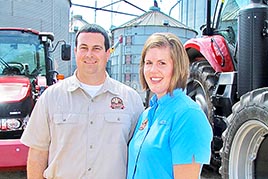 Jay Yeargin of Greenfield is pictured with his wife Alice Ann. Yeargin was named Tennessee Farmer of the Year for 2020 by UT Extension. The couple produces row crops, cattle and hay. Jay also does custom dozer and track hoe work.

In the mid-1950s, J.G. became disabled and decided to sell his dairy cattle and with help, began raising beef cattle. His son, Jimmy, (pictured) was drawn to agriculture in the 60s, acquiring a small number of sows and purchased feeder pigs. In 1970, Jimmy built the family’s first pig barn on the site where Tosh Farms’ feed mill sits today. 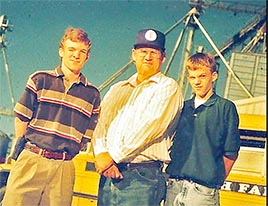 Jimmy graduated with a degree in Animal Science from the University of Tennessee at Martin in 1972, returned home and officially took over the family business. In 1978, he married Alonna and the couple had two sons – Jamey and Jonathan (pictured). 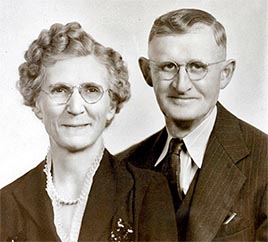 In 1913, Jimmy Tosh’s grandparents, A.L. and Ida Tosh (pictured), moved across the county line to Henry where A.L. farmed and was also a merchant, shipping sweet potatoes and selling coal and ice. 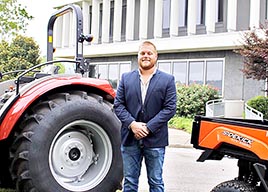 WEAKLEY COUNTY (March 2) — Agriculture contributes more to Weakley County’s economy than any other business sector. According to recent statistics, with a population of 32,902, local agri-business contributes $1.017 billion in sales and 4,003 jobs to the local economy.

In recognition of National Ag Day, which was celebrated on Tuesday, March 22, during Agriculture Week, area farming families are highlighted for their contributions to the communities in which they live.

The ag-related business contracts with livestock and crop producers in Henry and neighboring counties, including Weakley County, to supply the products the company needs to meet customer demand.

Tosh Farms currently tends over 18,000 acres of land, of which half is company owned. The other half of its acreage is leased from 83 different landowners in the Henry area. Around 2,300 acres are irrigated. The land is used to grow white corn, yellow corn, soybeans, milo, wheat, canola, and barley.

Tosh Farms’ second company, Tosh Pork, provides care for around 36,000 sows that produce over 930,000 market hogs each year. The company raises these pigs from birth to market. They currently have 10 sow farms where their sows are bred, give birth, and nurse their piglets. When the piglets reach weaning age (around three weeks old), they are transferred to one of 90 wean-to-finish sites, where they share a pen with other pigs their age and are provided a constant source of nutrient-rich feed until they reach market weight. The boar stud supplies the genetic material for the herd.

Additionally, Tosh Farms has a feed mill near their office that employs around 40 people to produce feed for the pigs. The feed mill uses corn that is grown by Tosh Farms and local farmers, along with ingredients from over 125 other suppliers to produce the approximately 7,000 tons of feed the pigs consume each week. As pigs grow, their dietary needs change, so Tosh Farms works with a nutritionist to make sure that their diets are formulated for optimal growth and health at every life stage. Once the pigs reach optimal market weight, they are marketed to regional packers. Tosh Pork also has its own construction team that builds new barns as the company expands.

Bacon By Gosh handles Tosh Farms transportation needs. A total of 60 semis, 85 trailers, and 64 automobiles are utilized to transport feed, pigs, and company employees. Tosh Farms employs 15 mechanics to maintain its fleet and ensure that trucks are as fuel efficient as possible. Bacon By Gosh also oversees truck wash operations, which maintains biosecurity by cleaning, disinfecting, and drying all of the trailers in between loads of pigs, to help prevent the spread of disease.

In addition to having hands-on experience, Spencer is well versed in the farming industry, having graduated from UT Martin in 2018, where he earned a Bachelor of Ag Business degree.

“My great grandfather started this farm many years ago,” Spencer said. “His granddaughter, who was my grandmother, married my granddad, and he farmed with him. My dad farmed his whole life full-time. I grew up loving it, and I never wanted to do anything else.

“Last year, we only had about 65,000 bushels of storage capacity on the farm. But, we’ve expanded and built two 50,000 gallon grain bins. That’s really been a help to us. We run five irrigation pivots.

“I built two hog barns for Jimmy Tosh of Tosh Farms the size of two football fields, which hold 7,500 head.

“When I get them, they’re six weeks old and weigh about 15 pounds. I raise them until they’re about 280-300 pounds, which takes about five-and-a-half months.” Spencer says he tops out about two groups of hogs per year.

“I’m responsible for feeding them and making sure everything’s in order.

“I would love to build another hog barn,” Spenser said. “If I’m fortunate enough to have kids, I hope one day to have something built for them to carry on, and love it the way I do.”

Jay Yeargin and his wife, Alice Ann, of Greenfield, operate a farm in Weakley County where they produce row crops, cattle, hay, and do custom dozer and track hoe work.

The Yeargins have been farming for the past 18 years and are well known in the agricultural community.

He started farming with just 60 acres when he was 21. Today the operation has 2,700 acres in production, of which approximately 40 percent is owned land.

Yeargin grows yellow corn, soybeans and wheat. He also produces a fair amount of hay — some 700 round bales a year, all on non-irrigated land. Some years, he grows food-grade white corn, which when sold at a premium, enables his farm to enjoy a measure of financial success.

The farming operation utilizes several different ways to market crops. Yeargin’s family is able to deliver grain to the best market, even if it isn’t the closest, because they own their own trucks and have grain storage on the farm. Storage gives them more options and allows them to have full-time employees, so they can deliver grain all winter.

In addition to being a row crop producer, he also runs approximately 60 head of beef cattle.

A 2004 graduate of UT Martin, Yeargin earned a degree in Agriculture Business. Alice Ann followed one year later with a degree in Business Administration with a concentration in marketing.

When not working on the farm, Yeargin also operates a mowing and track hoe business.

In 2020, Yeargin was named Tennessee Farmer of the Year by the University of Tennessee Extension Office.

Alice Ann has served as the Weakley County Chamber of Commerce president, and was named as the Tennessee Farm Bureau Young Farmer and Rancher Outstanding Young Woman in 2013.

Most people don’t understand the contribution of agriculture to our lives. But everything we eat, use, or wear every day is provided by agriculture.

National Ag Day was founded by the Agriculture Council of America in 1973, and was first celebrated in 1979. Since then, the ACA has put efforts into creating awareness about the role of agriculture in modern society.

The non-profit organization comprises all the leaders in the agriculture and food community. This day is observed to honor the efforts of people related to agriculture and promote awareness about these efforts amongst people.

It is that day of the year when all the producers, agriculture organizations, universities, corporations, and government departments take out some time to recognize the greatness of agriculture.

Local residents are encouraged to buy locally-produced products to support local-farming and farmers in the Weakley Country area.

Tennessee’s strong agricultural economy accounts for 8.3 percent of the state’s economy while generating over $56.8 billion in output.

Over 40,000 Tennesseans are employed by food and agriculture establishments. Since 2010, there has been a five time increase in jobs from breweries, distilleries and wineries.

There are over 640 food and agriculture establishments in Tennessee.

In 2020 alone, more than $1.0 billion in Tennessee food and agriculture exports found their way to major markets around the world. The five largest export markets consumed 54 percent of Tennessee’s food and beverage manufacturing exports in 2020.

Generation after generation, Tennessee has produced some of the best-known and most respected food brands in the world. From sippin’ whiskey to candy bars, Tennessee brands stand tall in the world of memorable tastes. Brands like Jack Daniel’s, Bush Beans, Moon Pies, Goo Goo Clusters, M&M Mars and Little Debbie Snack Cakes, grew out of Tennessee’s deeply held traditions of agriculture, hospitality and craftsmanship.