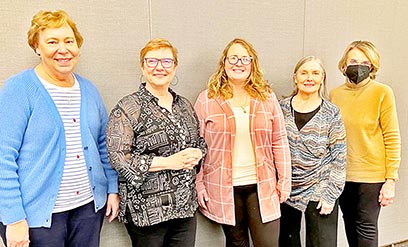 PROMOTING EDUCATION AND THE ARTS — Karen Campbell (second from left) discussed her work as communications director for Weakley County schools and her association with Weakley Arts Can when she met with the Fortnightly Club. Pictured also (L to R) are Lisa Evens, hostess; Katie Parr, director of Martin Public Library and a special guest at the meeting; Anna Clark, Fortnightly president; and Jenna Wright, hostess.

In her presentation, “Learn. Create. Become: The Power of the Arts and Weakley Arts Can,” Karen explained how Weakley Arts Can is an advocacy group designed to promote the arts. She explained that with backing from school officials, there are thriving programs in music, art, and theater in our schools.

Karen distributed a poster about the Weakley County Schools Arts Festival, which will be held on April 30 from 11 a.m. – 2 p.m. at the Martin Event Center at Martin Public Library. This year’s festival will celebrate visual arts, live music, and theater performances by students of all ages. More information about this event is available at Martin Public Library and on several Facebook pages and websites.

In her presentation for Fortnightly, Karen described one project where a group of graphic arts students learned about T-shirt production from going to cotton fields, to the gin, to designing a logo, to cutting silk screens, to production, and to wearing their shirts.

A believer of “if you think it, you can make it happen,” Karen also distributed a four-page handout focusing on March as “Arts Education Month.” Included in the handout were the names and schools of the music, visual art, and theater teachers in Weakley County. Listed also were news items and information about upcoming concerts and events.

Lisa Evans, one of the hostesses for the March Fortnightly meeting, introduced Karen, who returned to Weakley County in 2017 to help with family illnesses. Karen served as a part-time reporter for The Weakley County Press before accepting her current position, where her many articles keep the community updated about the exciting things happening in Weakley County schools.

In a note to the Fortnightly Club thanking members for inviting her to speak, Karen wrote, “I am very proud of my home county and the great strides the school system and groups like Weakley Arts Can are making. To encourage young minds to dream is quite a privilege. To get to tell others is a joy.”

Fortnightly members were greeted by hostesses Lisa Evans and Jenna Wright. Hostess Sherrie Hatchel was unable to attend, but had contributed to the festivities in a room decorated in a St. Patrick’s Day theme. Decorations included many shamrocks, white tablecloths, a green lace table runner on the refreshment table, glittering shamrocks on the windows, green leprechaun hats, green and gold “coins,” and small candy-filled pots of gold.

After Karen’s informative and exciting talk, Fortnightly president Anna Clark called the business portion of the meeting to order. She had previously welcomed Katie Parr, the new director of Martin Public Library, as a special guest.

At the April 4 Fortnightly Club meeting, Jenna Wright will give a presentation titled, “A Musical Legacy: My Uncle Gordon, The Jordanaires, and Elvis.”