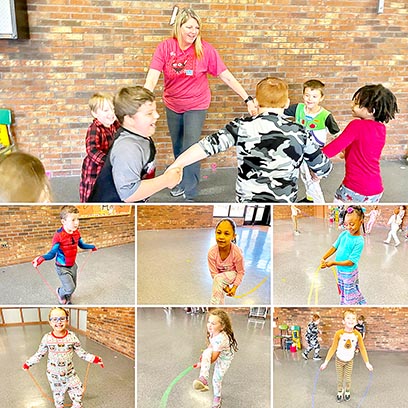 Pajama Day didn’t stop Brook Allen’s class from jumping and dancing for a cause as they took part in Physical Education teacher Lisa Beam’s annual emphasis on the Kids Heart Challenge. Current efforts have raised $8,500 which will be added to the more than $170,000 Beam and Martin Primary have raided in the last 24 years.

MARTIN (March 9) – Physical Education teacher Lisa Beam has a heart for raising money and awareness to fight heart disease and strokes. For the 24 years she’s been at Martin Primary, she’s been the driving force behind the Kids Heart Challenge. Her efforts have raised more than $170,000 thus far. And with each class of jump roping and dancing kindergarten through second graders this year, she is promoting the goal of adding another $13,000.

Kids Heart Challenge raises money for the American Heart Association. The cause is “near and dear to her heart” because her father has battled heart issues. Mason West, who lives in Kentucky, has had valve replacement surgery, a heart attack, and an aortic aneurysm. But the 86-year-old is going strong and even rides a motorcycle every week thanks to medical advancements that Beam feels she’s helped to make possible with hers and MPS’ fundraising efforts.

“It’s amazing what they can do to help people who have issues with their heart,” she acknowledges. “I get emotional talking about it.”

To encourage and educate her fellow fundraisers, she offers incentives. This year they can take home cute monster-like Heart Hero when they bring in their first donation. As they raise more money, they earn prizes such as jump ropes and t-shirts. If they raise $75, they earn the chance to slime Principal Tracey Bell later this spring.

Beam reports that some students have already raised more than $500. Last week, the school is at $8,500. The deadline was extended to Friday, March 11, in hopes of reaching this year’s goal.

To increase heart awareness, she teaches jump rope skills in their twice weekly classes and plays music for dancing and cardio work. Students also learn how the heart works.

“At Martin Primary we know that lessons are learned inside and outside the classroom,” noted Principal Tracey Bell. “Lisa Beam is a role model for our students. She is dedicated to this cause, and we are delighted to support her each year.”