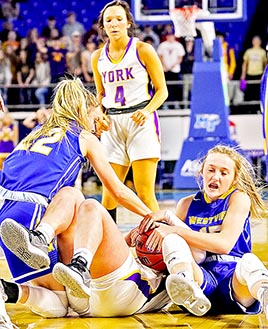 Westview Lady Chargers Kylee Alexander and McCall Sims (22) look to get control of the ball in the finals against York Institute Saturday in Murfreesboro as the two teams vied for the TSSAA Class 2A state championship title. Photo by Aaron Nickens/Courtesy of the Fentress Courie 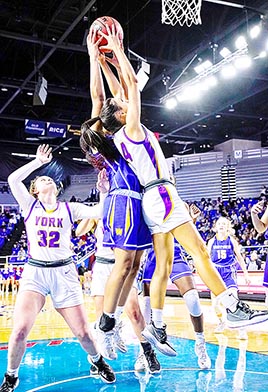 York’s Laci Patton shoots while being defended by Westview Lady Charger Jada Harrison during Saturday’s championship match up between the teams. York’s Gabrielle Beaty (32) stands by for the rebound. Westview claimed the Class 2A State Championship title. Photo by Aaron Nickens/Courtesy of the Fentress Courier 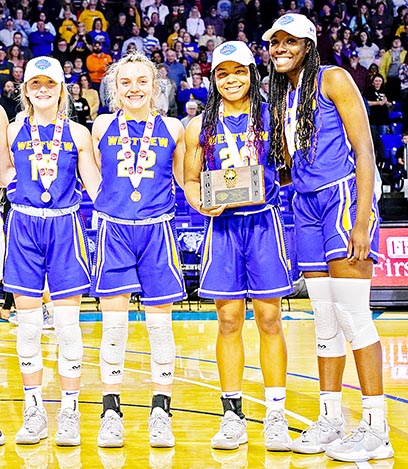 Westview Lady Chargers named to the All-Tournament Team were (L to R) Kylee Alexander, McCall Sims, Jada Harrison and Angelina Barr. Harrison was named tournament MVP and was a TSSAA Class 2A Miss Basketball finalist. Photo by Aaron Nickens/Courtesy of the Fentress Courier

MURFREESBORO (March 12) – Perhaps this game didn’t have the same drama as the last Westview state basketball championship, but it was just as sweet to those clad in blue and gold.

The Lady Chargers broke open a close game in the fourth quarter and defeated York Institute 47-37 to claim the TSSAA 2A girls state basketball crown. It marked the second basketball title in school history. Westview beat Livingston Academy in 1996 for its first gold ball.

The white knuckles were evident on both sides of the floor. The Lady Dragons closed within four three times in the first 3:30 of the fourth quarter, but could draw no closer.

Westview cringed to a 34-30 lead at the 4:30 mark when it rallied for a 7-0 run and 41-30 advantage. Jada Harrison and McCall Sims led the surge that essentially pushed victory out of York’s grasp.

The two teams played swap-out for the next three minutes.

Barr, Sims, Kylee Alexander and Harrison made the all-tournament team. Harrison was recognized as tourney MVP.