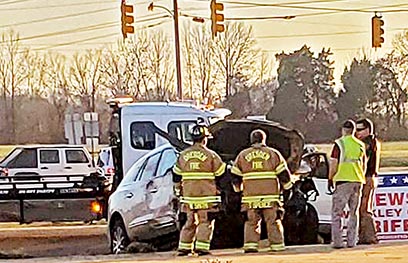 A Greenfield woman involved in an automobile accident in Dresden on Wednesday, March 2, died at a Nashville hospital the following day as a result of her injuries. The victim’s 2013 Buick Encore is being prepared to be towed from the scene after hitting a light pole head-on.

DRESDEN (March 3) — A local woman involved in an automobile accident at a busy Dresden intersection on Thursday, March 3, died Friday morning at a Nashville hospital.

Barbara Goodson, 79, of Greenfield succumbed to her injuries, sustained in an automobile accident involving another vehicle.

A Gleason man was also injured in connection with the accident, but was not seriously injured, and has since been released from the hospital.

Dresden Police Chief Chris Crocker said, “At 4:30 p.m. on March 3, I received a call reporting a man had been run over on Greenfield Hwy 54 near the intersection of Summers Road and was lying in the highway.” While responding that call, the officer witnessed another accident. The officer states he was traveling west on the Highway 22 four-lane, and as he approached the intersection of Hwy 54, he saw a car jump through the air, travel over Highway 22 and crash on the other side.

With the assistance of Weakley County Sheriff’s Department officers, the Dresden Police Department and other emergency personnel worked both accidents simultaneously.

“I went to what I thought, at the time, was the most serious accident, which was the man in the roadway, who was identified as Michael Sawyers, 67, of Gleason,” Crocker said.

When the officer arrived on the scene, he learned the victim was not hit while walking; but instead, was injured when his northbound 2009 Chevrolet Z71 pickup truck was rear-ended by a 2013 Buick Encore driven by Goodson, who is the same driver that had the accident at the intersection of Highway 54 and Highway 22.

Sawyers told the officer, “I saw her coming, but she wasn’t slowing down.”

According to Chief Crocker, Goodson’s vehicle struck the back of Sawyer’s truck so hard, it knocked the bed up into the cab and forced the dash into his lap.

Sawyers told police, after the accident, he pulled over to the side of the road. He said his back was hurting so bad, he exited his vehicle and lay down next to his truck.

Chief Crocker said, “Sawyers appeared to be in shock.” The officer noted when passing motorists saw the victim lying on the ground and the truck debris in road, they incorrectly assumed he had been run over while walking along Highway 54.

After Goodson’s vehicle stuck the back of Sawyer’s truck, she continued north on Highway 54 toward Dresden.

Crocker estimated Goodson’s vehicle was traveling approximately 80 miles per hour as it approached the intersection of Highway 22. She failed to make a right-hand turn from Highway 54 onto Highway 22. Instead, she drove off into the median of the turn-lane and up the other side at a high rate of speed. Her vehicle went airborne across the four-lane, landed in the median on the other side of the road, went airborne again, knocked over a metal light pole, overturned, and came to rest on its right side.

Chief Crocker said he was thankful there were no vehicles at the intersection when Goodson’s vehicle flew across Highway 22, or it could have been much worse.

The officer explained Goodson was on her way to CVS to pick up her medicine at the time of the accident, and is thought to have had a medical emergency, which caused her to have the accident.

Dresden Fire Department worked the scene of the accident at the intersection of highways 22 and 54. Rescue 1 personnel assisted Weakley County Emergency Management Service and Weakley County Rescue Squad with extracting Goodson from her vehicle. Engine 1 personnel established a landing zone for an Air Evac Lifeline medical helicopter, which landed behind McDonald’s restaurant and airlifted the patient to Vanderbilt Hospital in Nashville.

Sawyers was transported to West Tennessee Healthcare Volunteer Hospital in Martin by Weakley County Ambulance Service. Although he suffered back injuries, Sawyers was released from the hospital and was up and about the next day.

Both vehicles had extensive damage and were towed from the scene.