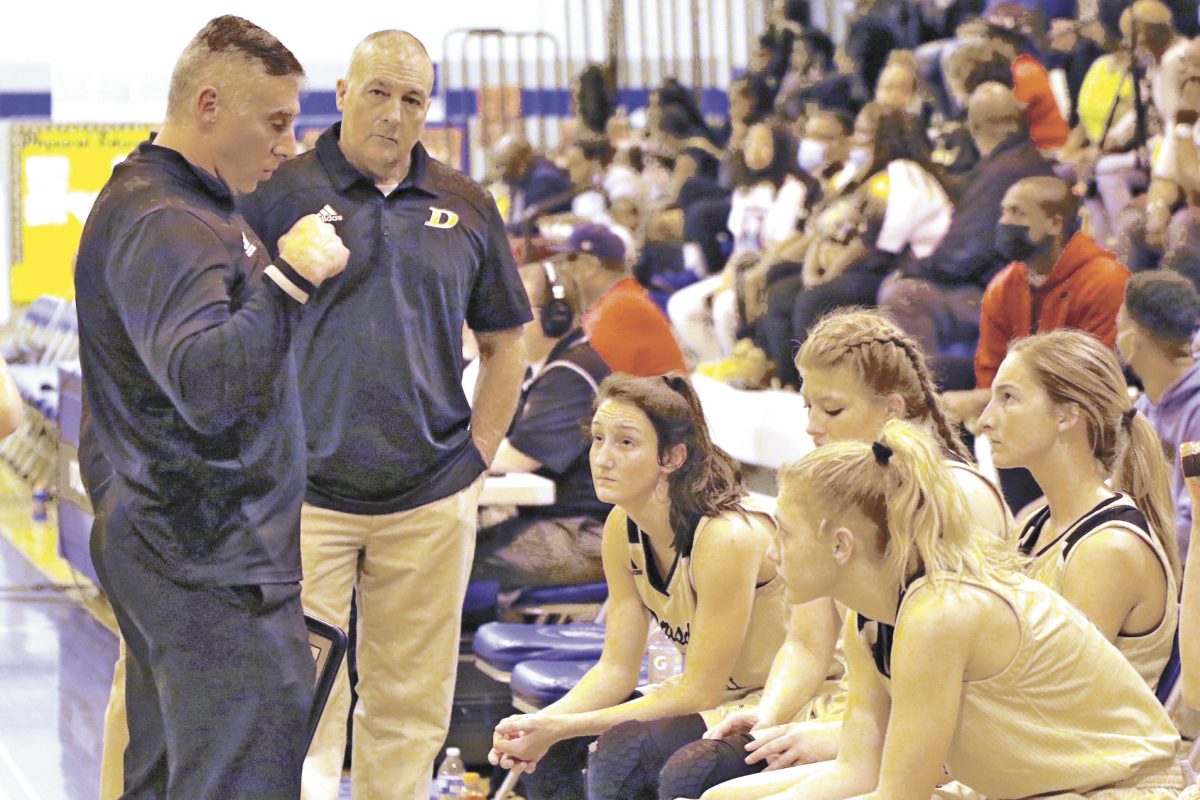 Dresden Lady Lion Head Basketball Coach Jonathan West (Standing, L to R), along with Assistant Coach Steve Jaco rally the Lady Lions during their match up against Memphis Academy of Health Sciences Saturday night during the substate game held in Memphis. The Lady Lions prevailed over MAHS and will head to Murfreesboro this week for the TSSAA state championship games. For weekend highlights, see Pages 12 and 13. Photo courtesy of Melissa Oliver Overton

WEAKLEY COUNTY (March 5) – Whether the event was held in Nashville or Murfreesboro, folks from Weakley County know the way to the state tournament.

Saturday night, three Weakley County teams earned their entry visas to the girls’ Elite Eight: Dresden and Gleason in Class A, Westview in 2A.

It’s not the first time Weakley County has had multiple teams in the event, but it may be the first time three local teams reached state in the same year. More on that in a moment.

Going back to 1962, 51 seasons, Weakley County has had at least one team representing it at the state tournament 40 times, including the last 17 seasons in a row. Local teams have captured six state championships going back to 1984, when Greenfield’s boys stunned Bolton for the county’s first state crown of any kind.

Gleason’s Lady Bulldogs repeated the feat in 1992, again in 1999 and once more in ’07. Martin-Westview’s Lady Chargers defeated Livingston Academy in a thriller back in 1996, when Tasha Atkins drained the game-winning free throws with seven-tenths of a second remaining on the clock. Greenfield’s girls secured the state title in 2018, and probably would have won another two years later had “science” not intervened.

Weakley County has had four state runners up as well. Gleason fell to Bradford in 1993 during a blizzard on a night where the only heat source was Bradford’s Michelle Street. She had 33 points and a tournament-record 23 rebounds. Greenfield’s boys reached the finals in 2003. Westview’s girls fell just short in 2003 and again in 2019.

In 1990, Gleason and Dresden appeared together in the girls’ tournament. Gleason fell behind 23-10 in the first quarter, but outscored Wayne County the rest of the way, only to fall short in the end. Dresden suffered an opening-round setback to eventual champ Clarkrange.

In 1969, Gleason’s boys and girls qualified for state. The Bulldogs faced future Dallas Cowboys star Ed “Too Tall” Jones and Jackson Central-Merry that year. Westview accomplished the same feat in 2016, with both Chargers and Lady Chargers punching their state tickets. McKenzie will send boys and girls to state this year (a sliver of McKenzie pokes into Weakley County).

With three teams headed to the Glass House at MTSU, it’s a good bet that someone from these parts may bring home another shiny basketball.