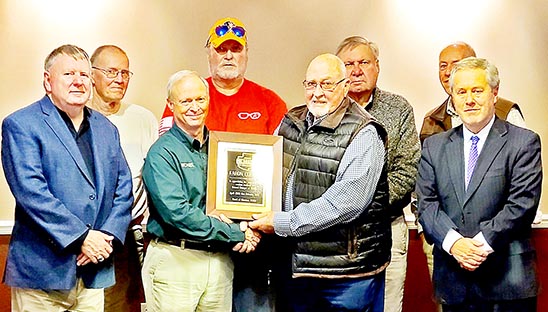 Weakley County Municipal Electric System (WCMES) Board of Directors presented Faron Collins with a plaque of appreciation for his years of service as General Manager. On February 28, 2022, Collins retired after 42 years of service. Twenty-two years of which were served as General Manager. Collins began his career at WCMES in November 1979 as a Distribution Engineer. He further advanced to the Manager of Construction, Operations, & Maintenance. Later in April of 2000, he became WCMES’ General Manager. Throughout the years, Collins worked to protect Public Power in the Tennessee Valley. He also worked to ensure that reliable affordable power was provided to the citizens of Weakley County and its surrounding communities allowing a higher quality of life. On hand for the plaque presentation were (Front, L to R) Roger Stewart, Faron Collins, Jerry Brigance and Lang Unger; (Back, L to R) Johnny Vincent, David Lamb, James Westbrook and Larry McCartney.