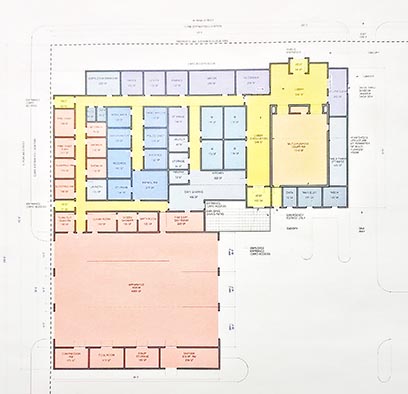 Mayor Washburn stressed the plans are a work in progress and will change before a final version is presented to the board for its consideration at a later date.

The mayor stated A2H of Memphis drew up the plans in its current form for city leaders to study and amend as deemed necessary.

The building would be approximately 20,000 square feet in size and incorporate Dresden’s city hall, fire and police departments under a single roof. There would also be a combination space utilized as a board meeting room, training room, community room, and a safe room.

The municipal complex building would face Main Street, across from the courthouse. The street would be widened and the structure brought down to street level. A demolition crew is knocking down all of the front-facing concrete to make this happen. The sidewalks and new municipal building will also be ADA accessible (handicap accessible).

Basically, the plan calls for the Dresden Fire Department to have three large drive-through bays facing Poplar Street, which would house two full-size fire engines in each (total of six).

Mayor Washburn stated installing an emergency generator for the entire complex is also under consideration.

The mayor noted the municipal complex is designed to meet the needs of the city for the next 50, 75, or 100 years.