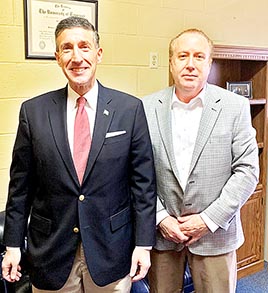 Read the full letter below.

We write to urge expedient approval of Governor Bill Lee’s request to declare a major disaster pursuant to the Robert T. Stafford Disaster Relief Act as a result of the severe winter weather, frigid temperatures, freezing rain, sleet, ice, and high winds that occurred from February 3-4, 2022.

Governor Lee’s request is attached, and on behalf of the State of Tennessee, we urge you to approve it as soon as possible.

Our offices can provide you with any additional information you need.

“The winter storms that swept across West Tennessee brought freezing rain, high winds, and ice that impacted the lives of thousands of Tennesseans and claimed the life of one Tennessean. Many throughout the district were out of power for more than a week as temperatures continued to drop. I urge President Biden to approve Governor Lee’s declaration to ensure that all victims receive the assistance they desperately need. Thank you to Senators Blackburn and Hagerty and the entire Tennessee Congressional delegation for joining me in sending this letter,” said Rep. Kustoff.