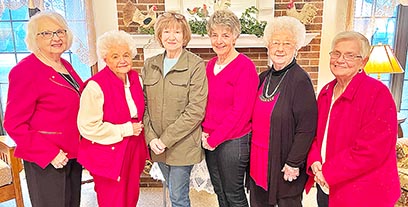 The meeting was opened by president Mary Elizabeth Bell reading the thought for the day, “There is no surprise more magical than the surprise of being loved,” – Charles Morgan. The group recited the Pledge of Allegiance to the Flag and read the Club Collect in unison.

Kathy Simmons gave the inspiring devotional. She read Matthew 6:26, “Look at the birds of the air, for they neither sow or gather into barns; yet your heavenly Father feeds them. Are you not of more value than them?” She then told of many interesting and unusual facts about various birds.

The group sung the song, “Let Me Call You Sweetheart,” in unison. The roll was called with each member passing a Valentine’s gift to the person to her left and telling the number of snack foods brought for MyPlate/YourPlate donations for a service agency.

JoAnne Gill gave the secretary’s report without correction. Treasurer Sue Stewart gave her report and was accepted. Dues for the year are due. Each member also gave a donation for the American Heart Association.

For Business Unfinished and New, Bell announced February is American Heart Month and that reading records and activity sheets were due February 1. She also said for the March MyPlate/YourPlate donation will be sauce, and to remember the roll call for March is to name a skill learned as a child that they still do today.

The club’s Achievement Luncheon will be held March 17 at the Farm Bureau Building in Dresden, starting at 8 a.m. It will be catered by Simply Southern Cafe in Gleason. Members are to enter any Cultural Arts or Fashion Review entries that day.

Pat Potter gave a report of her Amtrak Train trip that she and her husband experienced from September 3 through September 26, 2021. They visited many states and enjoyed great scenery during that time.

For the Agent’s Program, Beverly Shelby passed to each member the booklet, “Second Act: A Script for Positive Aging.” It listed tasks and goals one would like to accomplish in maintaining connections with friends and family. She explained each page in the booklet and how it could be used to enable us to live with more purpose and positivity

The game of Bingo was enjoyed by all with Aileen Edwards winning the cover card prize.