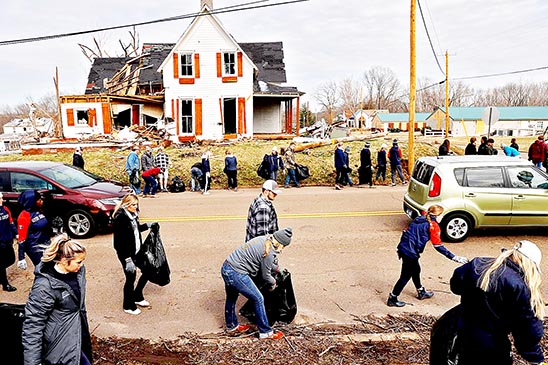 More than 150 volunteers associated with the University of Tennessee at Martin spent their Saturday helping property owners clean up debris left in the wake of the December 10, 2021, tornado that hit parts of Dresden, including its downtown area.

After accepting a bid by Quality Contractor Services of Milan for the demolition of the downtown block in Dresden housing city hall, the police department, the former Majestic Steakhouse, the Flower Shop and the attorney general’s office, demolition began on the block last week. Plans call for an expanded municipal complex for the City of Dresden on that block in the future.

DRESDEN (February 25) – The landscape of the City of Dresden is ever-changing after a tornado ripped through parts of the town and downtown area December 10, 2021, destroying or damaging 187 residences and 21 businesses.

A final, third-step declaration by the FEMA Agency and President Joe Biden approximately two weeks ago, allows for the funds for the clean up of debris.

“In order to accomplish the clean up of debris as quickly as possible, we need the help of property owners and the public in bringing debris, whether tree or construction debris, to the side of the road for pick up by the clean-up contractor once the contract is awarded in a few weeks,” the City of Dresden posted to its social media Facebook page over the weekend. The note further added, “all debris needs to be located at the roadside within reach of a trackhoe for loading into trucks for hauling to a licensed landfill. Please put tree debris in one pile and construction debris in a separate pile.”

Volunteers are still needed to assist property owners in cleaning up their properties. On Saturday, approximately 150 students, alumni and faculty from the University of Tennessee at Martin spent time in Dresden helping with clean up. Those represented included UT Martin Alumni, UT Martin Athletics, Alpha Omicron Pi-Tau Omicron Chapter sorority and the Pi Kappa Alpha fraternity of Martin.

Last week, after the City of Dresden Board of Mayor and Aldermen approved a low bid by Quality Contractor Services of Milan to demolish the city block containing the destroyed city hall, police and fire departments, demolition began on the area that housed the former Majestic Steakhouse, The Flower Box, the Attorney General’s office and Dresden City Hall. Plans call for continuing demolition of the remaining structures of the block containing the municipal building in downtown Dresden.

Some of the businesses destroyed plan to rebuild, with construction under way for one of the shops destroyed by the December tornado.

The owners of Dresden 4×4 Automotive, Donnie Essary Automotive Center, Kountry Korner Convenience Store and Restaurant, Vaughan Brothers Hardware, the Dresden Enterprise and added to the list of rebuilds is The Chopping Block Restaurant. Owner Steve Pecktol said the building has to be demolished after it was extensively damaged by the December tornado, but plans are under way for rebuilding the local restaurant. He added his business sign made its way to Cadiz, Kentucky, surprisingly unharmed during the storm. Construction began on Essary’s Automotive Center a few weeks ago.

In related news, everyone impacted by the December tornado are invited to attend a Community Town Hall next week, hosted by the City of Dresden and Weakley County government. This discussion will be an opportunity for a Question-and-Answer session, updates offered by local elected officials and an open discussion about the community’s vision for Dresden and Weakley County. The event starts at 6 p.m. Tuesday, March 8, at Dresden Middle School.

Those with questions in advance are asked to contact the office of Weakley County Mayor Jake Bynum at 731-364-5413.