Junior high Beta Club officers Colt Corbin, Caleb Jones, and Drake Lehmkuhl first helped other officers organize the gifts by grades and then classrooms. Next, they loaded carts and made their deliveries to students in pre-K through fifth grade. 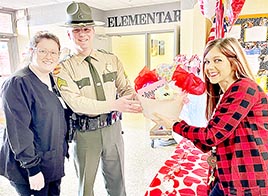 Community friends and family such as Payton and Sgt. Caleb Cooper had a one-hour window if they wanted to drop off packages for students during the Bulldog, Be My Valentine event. Five-year-old Avery received a bucket of treats filled with local purchases. Jessica Pratt is receiving the package to ensure it gets to Avery. 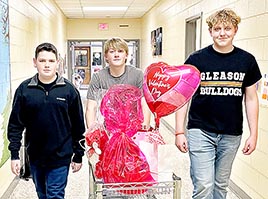 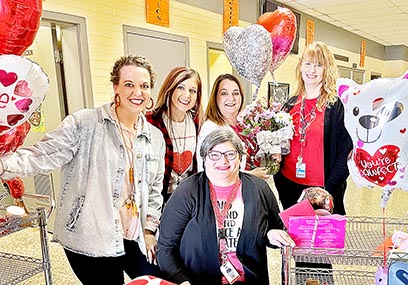 GLEASON (February 15) – Crediting local business collaboration and schoolwide enthusiasm and efficiency, Gleason School Principal Lee Lawrence successfully restored a one-time tradition on February 14. “Bulldog, Be Mine Valentine” flowers and treats were delivered from the two Gleason florists with elementary, junior high and high school Beta officers assuming the role of Cupid, ensuring that each gift made it to the intended recipient.

“We brought back something old and put a new twist on it,” noted Lawrence of the enterprise planned with fellow Beta Club sponsor and school librarian Amy Lawrence and a staff team – Paige Vaughn, Jessica Pratt, Lisa Chambliss, and Kerri Maddox.

“We ask our local businesses to support us all the time, so we wanted to have an event that turned around and supported them. We encouraged everyone to shop local while giving students this special opportunity to have items delivered to school once again,” he said.

Gleason Flower Market and Jan’s Florist reported a total of more than 250 bouquets, sweet treats or other goodies were ordered by family, friends, and fellow students.

Elementary classes enjoyed class parties with snacks and card exchanges prior to the deliveries at the end of the day. Junior high and high school collected their gifts near the final bell and then mingled in the gym before leaving for home.

The carefully organized delivery process addressed the chaos which ultimately ended the tradition as a deluge of gifts arriving throughout the day became a distraction as well as attempting to keep young emotions in check. During COVID precautions, the observance of the heartfelt holiday took a virtual form with the day falling during Kindness Week and being observed with fundraisers for good causes. While the events had impact, Lawrence acknowledged, they did not help the local economy, something that the Gleason resident and school administrator values for both the good will it produces and the fact that local tax dollars are needed to support school budgets.

Feb Dempsey, sister of Jan Finch who owns Flowers by Jan, said completing the school order had been a two-week focus as they worked out a system cards, labels and boxes for each gift and transported them to the school.

She noted the event was a “welcomed bump” in sales.

Leah and Lee Sawyers, owners of Gleason’s Flower Market and Gifts also reported the experience had been “very productive.”

“We appreciate it so much,” Leah explained as she praised the school and the investment back into the community. “They’ve been great, checked on us and made sure we knew what to do.

“Buying local helps the town and brings the morale up,” she added.