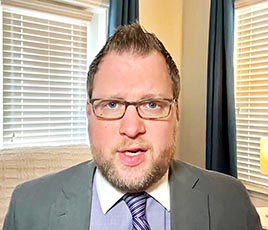 Patrick De Haan, head of petroleum analysis at GasBuddy, hosted a Facebook Live press conference Thursday to offer gas price projections as a result of the recent attacks on Ukraine by Russia.

(February 24) – On Thursday GasBuddy head of petroleum analysis Patrick De Haan, held a Facebook Live event press conference to address mounting concerns regarding the ongoing conflict from Russia’s invasion into Ukraine and the anticipated energy price fallout. “For the ninth straight week, the nation’s average gas price has posted a rise, climbing 7.5 cents from a week ago and stands at $3.59 per gallon today,” according to GasBuddy’s website. “Americans could be paying the higher price because of Russia’s incursion as early as right now. The increase will likely play out over the course of the next several days.”

“Obviously the situation has taken a grave turn, this was not necessarily a shock concerning the headlines coming from the White House – but now that Russia has attacked Ukraine, the situation escalates,” De Haan shared. GasBuddy’s analysis is that due to the severity and length of the conflict, crossed with the incoming sanctions world governments are levying against Russia for its invasion, gas prices could continue to steadily rise over time. Previous forecasts are being changed by GasBuddy to accommodate the conflict’s expected effect on not only oil pricing, but additionally natural gas pricing. “Four dollars a gallon, that is a very real possibility for the national average by April or May,” was one grave forecast given.

“Gas stations usually struggle to raise gas prices as quickly as they pay them, gas stations will be facing the higher cost immediately today but it may be difficult for gas stations to immediately pass that along. Often times that is why gas prices do not often come down as quickly as they go up.” With the temperatures rising and Winter making way for Spring and Summer, the normal rise at the pump is already factored in to bring gasoline prices higher, and there appears to be no expectation of a scenario for price decrease in the immediate near future.

“Gasoline prices will go up. Diesel prices will go up. Jet fuel will go up. And that means logistics, transporting goods, all those prices will go up. Airline tickets could go up. Goods delivered to the store could go up,” De Haan said. With gas seeming destined for steady increases, GasBuddy gave a sobering forecast of increased inflation across the board, with a general feeling that relief should not be anticipated by consumers. While this is daunting for working families, there does appear to be a glimmer of hope that post-Summer pricing could decline, with the mixture of annual prices declining with the cold as well as the always possible resolution to the Ukrainian conflict.

“There is the possibility of the President tapping into the Strategic Petroleum Reserve,” GasBuddy noted, “that is something the President has said he is prepared to do.” However, GasBuddy was reluctant to firmly state how much of an effect such a release could have on gas prices long term.

De Haan said Russia is the world’s second largest oil producer, with the United States at the top spot of oil production.