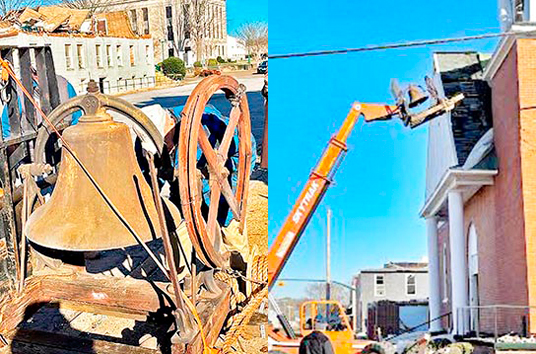 The old bell at Dresden Cumberland Presbyterian Church was lost over 70 years ago when the building underwent extensive renovations following a fire. It was salvaged from the debris after the December 10, 2021, tornado. Plans call for revamping the bell for use in the new church, which is set to be constructed at the same location in the downtown area.

DRESDEN (February 22) — Dresden Cumberland Presbyterian Church, located on the corner of Nelson and South Wilson street just off the court square, was one of several structures in the City of Dresden that suffered significant damage, when a tornado ripped through the town on December 10, 2021.

Longtime members, Junior and Winnie Moore, lamented the loss of their church, saying, “It was a longtime landmark in the City of Dresden.”

Tornado damage to the church and parsonage was determined to be too extensive and impractical to repair, so the decision was made to demolish what was left of the building and to rebuild it later in 2022.

While digging through the debris, church leaders discovered the original church bell that was lost more than 70 years ago.

The bell, which was installed in the original church in 1886, signaled important church events for more than 80 years, until the bell tower was walled up during renovation after a fire that occurred around 1962-1963. It was after the fire when members moved services to the Weakley County Courthouse.

Junior Moore, 94, who remembered the bell from his youth, said, “The old bell was lost for a few years, until it was found last summer. I decided to go up in the attic and I spotted it with a flashlight. It was down in the well of the bell-tower. Several of the members of church didn’t believe it was in there. They went and looked but they didn’t see it.”

“When we got Russell Vancleave to do some work on the church, he called me one night and said, ‘we found the bell in the bell-tower.’ I asked him if he could get it out and he said he could, so I told him we’ll put it in the new church.”

Using heavy equipment, the bell was removed from the damaged bell tower on January 11, 2022.

Junior and Winnie’s daughter, LeAnne Moore Johnson, was on hand to witness and photograph the bell being removed from the damaged church.

“It’s on a trailer at my farm right now,” Mr. Moore said. “Mr. Vancleave, who is going to rebuild the church, stated he is going to restore the bell. We’re going to rework it and clean it up. It’s a nice bell and it’s a big bell. It rings perfectly.

“I can’t wait to hear it ring again. Once the bell is installed in the new church, we’re going to start ringing it every Sunday. I guess it’s been a long time since we’ve had a bell ringing in Dresden. I think Tom Reavis said he recalls hearing it ring when he was a kid.”

Mr. Moore noted all of the pews were undamaged by the storm and could be reused in the new church.

Mrs. Moore stated the Tiffany-stained glass windows, which are very expensive, were installed in the church when it was built in 1886. One of the windows was undamaged by the tornado and plans call for reusing it in the east end of the church.

“The new church is going to be similar to what we had, but we’re going to make a few changes,” Mr. Moore said. “The new church will not have a basement. However, we are going to have a family life center on the ground floor.”

Church member Tom Reavis of E.T. Reavis and Sons, said, “It was very traumatic to witness the church being torn down. It’s where I’ve gone all of my life. I’m sure my momma carried me up the front steps as a baby.”

Regarding the destruction of the church, Reavis said, “It’s sad, of course, but you continue to go on, because it’s the only choice you have.”

Reavis stated it was significant that the church bell, pews and one of the Tiffany-stained glass windows were salvaged. :We’ll be able to put some of the old in with the new in the new church.”

Church member Steve Ramsey said, “We hope the people will support our church, as our church has always supported our town. We are in need right now, and it will be good to see our church, the downtown area, and all of Dresden rebuilt.”

“My house and my store were also damaged by the tornado. Our house had extensive damage to the siding and to the roof and carport. So, I can’t escape from all of that. I’ve been living with it for two months.”

According to Reavis, the high winds tore off about a fourth of the roof of his business and drenched the inside, which damaged much of his merchandise. “We had a lot of water damage inside and had to throw away a lot of inventory.” Reavis noted after the tornado, he had to set out buckets to catch the water when it rained. But now that a new rubber roof has been installed, his business is in the dry. “I still have to do some repair work on the suspended ceiling and get it tied-in at the back of the store. The flooring tile is a mess. We still have a lot to get done. There’s a shortage of contractors. Everybody is busy. The store was closed from December 10-15, but has since reopened.

“We’re much more fortunate than some of the other businesses that were totally devastated,” Reavis said. “There was so much destruction all around us. I’m surprised that’s all that happened to us.”

Reavis noted there are approximately 16 heavily-damaged structures that must be torn down, between the intersection of East Main and South Wilson and Q-Mart located on East Main Street.

“It’s hard to look out the front door and see that the United Methodist Church and their Family Life Center on Church Street are gone,” Reavis said. “That the block is gone right beside us where the church was.” He also stated Southern Printing and the Dresden Enterprise office on South Wilson Street are now gone. “It’s just an unbelievable thing to see.” Additionally, he noted the entire south side of the court square where Dresden City Hall, the Police Department and Fire Department once stood, will have to be cleared away. “But, you go two streets over and it doesn’t look like anything’s happened.

The Cumberland Presbyterian Church in Dresden, Tennessee, came into existence in 1828 at the house of Mears Warner by Rev. Richard Beard who preached from the text, “As Moses lifted up the serpent in the wilderness, so shall the Son of Man be lifted up.” Rev. Beard was one of the pioneer preachers of Weakley County. Mears Warner and James Julin were the first ruling elders of the Dresden church. The first members were Mears Warner and wife, Levi Calvert and wife, James Fair and wife, Squire McNeely and sister, Mullins and wife and several members of the Julin family.

Mears Warner was the Commissioner who came to layout the town of Dresden and named it after Dresden, Germany, which was the birthplace of his father.

On February 17, 1851, Samuel A. Warner deeded lot 88 in Dresden to the church. After the house of worship was built, the Dresden Masonic Lodge was given authority to use the second story of this building for lodge purposes. The church was operated as a mission. The official organization of the church took place January 4, 1885. In 1886, the session met in the home of J. G. Thomason, where 10 members were added to the church and money was appropriated to buy hymnals. This place later became the home of Joe Malone, grandson of Mr. Thomason.

Rev. H. L. Dickey was the first minister to serve the congregation in 1885, and at the fall meeting of Hopewell Presbytery, October 10-12, 1885, he was authorized to visit the congregations in the bounds and solicit funds to assist in building a church-house. Rev. Dickey was serving the church half-time; the records show that there were nineteen paying members by 1886.

In 1885, after a session meeting, which resulted in a called meeting of the congregation, it was decided to erect a frame house for the meeting place of the church at the present location, which is at the corner of Wilson and Nelson streets. The congregation finished the house within one year and held services on a regular basis until 1896.

For a lack of ministerial leadership, the church ceased to have regular preaching in 1896, but it was reorganized in 1916. It was then that the church had a minister on a semi-monthly basis. In 1931, a total of 35 members, (23 active members) moved out of town or died in one year, after which the services were dropped and no church activities were held, with the exception of a few social and civic organizations meeting occasionally.

The church building was built jointly with the Masonic fraternity in 1842. From 1850 to 1885 the church was unorganized. It was reorganized by the Reverend H. G. Dickey in 1886 and a new church built by 1889, which was in use until the storm.

In 1950, the old building was remodeled and rededicated in a special service in October of that year. This was done under the leadership of Mr. Jack Freeman who became an ordained elder of the church. The building was modernized with a brick veneer siding exterior, an altered steeple and had an educational annex added to it.

Rev. Letie Clement returned to Dresden to give the Dedicatory Prayer for this service. During this same period, under the leadership of Mr. Freeman, a parsonage was erected behind the church on Nelson Street. It was a concrete-based frame, which within a few years became a brick veneer exterior, and finally a small carport was added to the east side of the building. The Reverend Doyle K. Richardson was the first pastor to occupy the parsonage. In 1980, the session approved a plan to remodel again, which resulted in the church office replacing the carport, with a half bath added. The former office of the church became a Sunday school room.

Reverend Letie Clement, one of the few female preachers at the time, was pastor for 18 years, from 1934 to 1949. Many in Dresden referred to her as Reverend Miss Letie Clement. She never married, but dedicated her life in service to God.

The following ministers have served the church since 1932:

The old bell serves as a symbol of the longstanding traditions of the local church family. It also gives its members hope that it will continue to ring true for many generations to come.